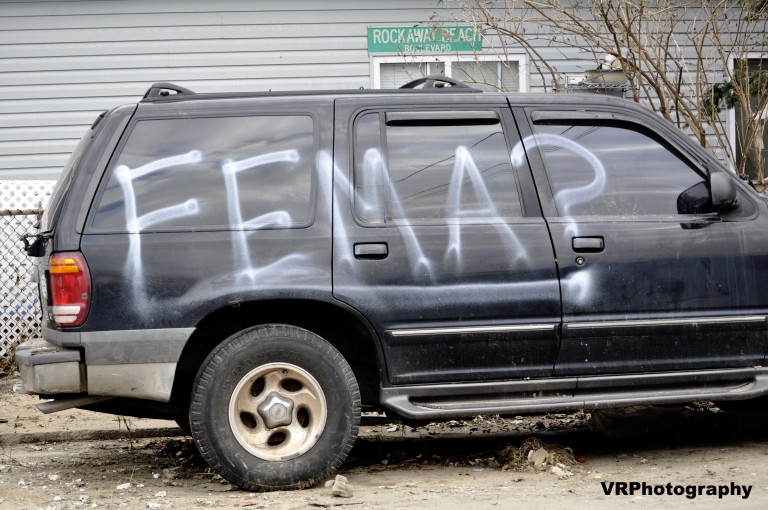 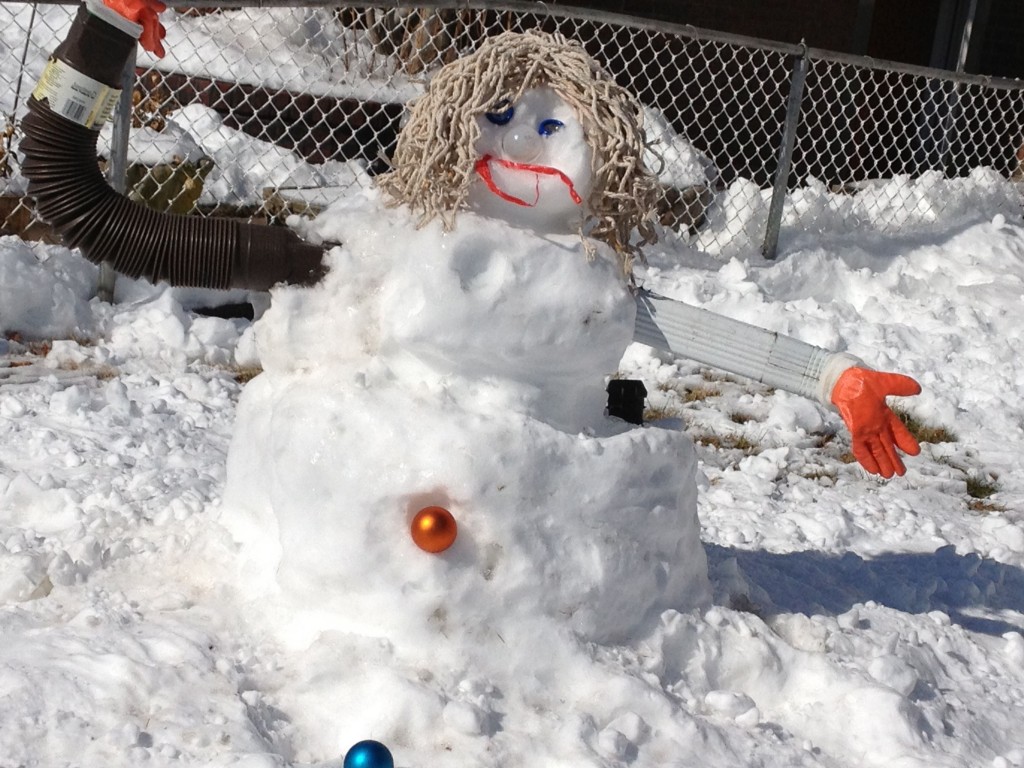 Snow that soon followed Sandy was put to very good use. Let’s face it, there wasn’t really much else to do but continue to clean up and clean out. Photo Courtesy Donna Faiella 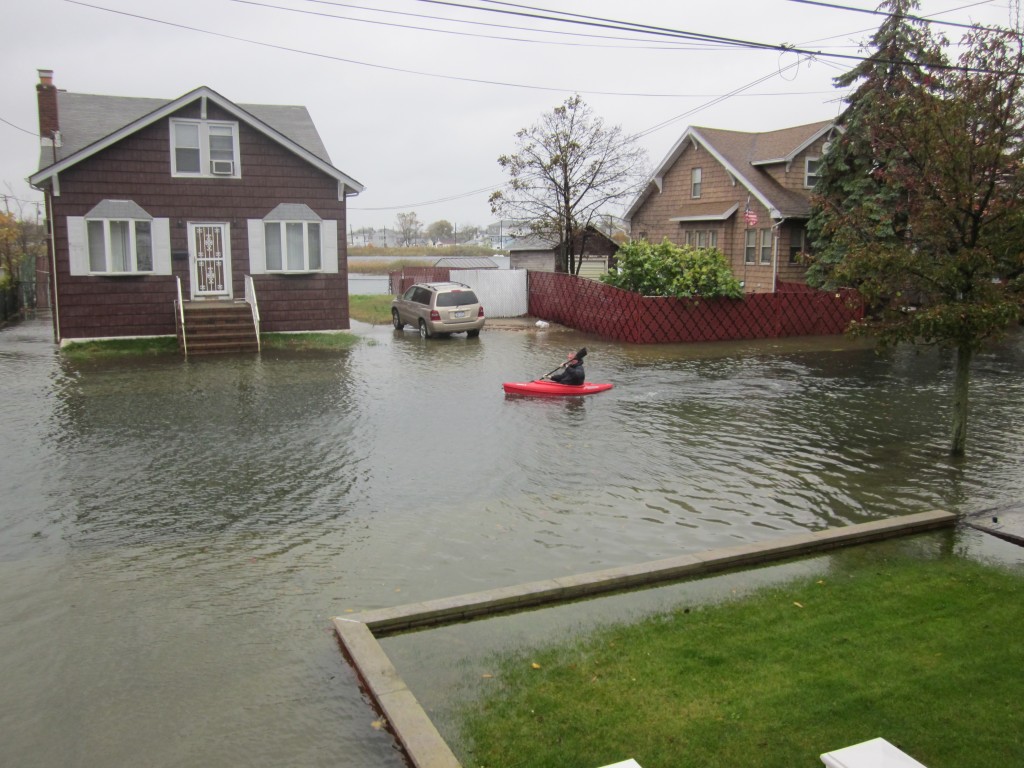 Take away the houses and the car in the backdrop and there you are on Lake Howard. Photo Courtesy Lake Riley 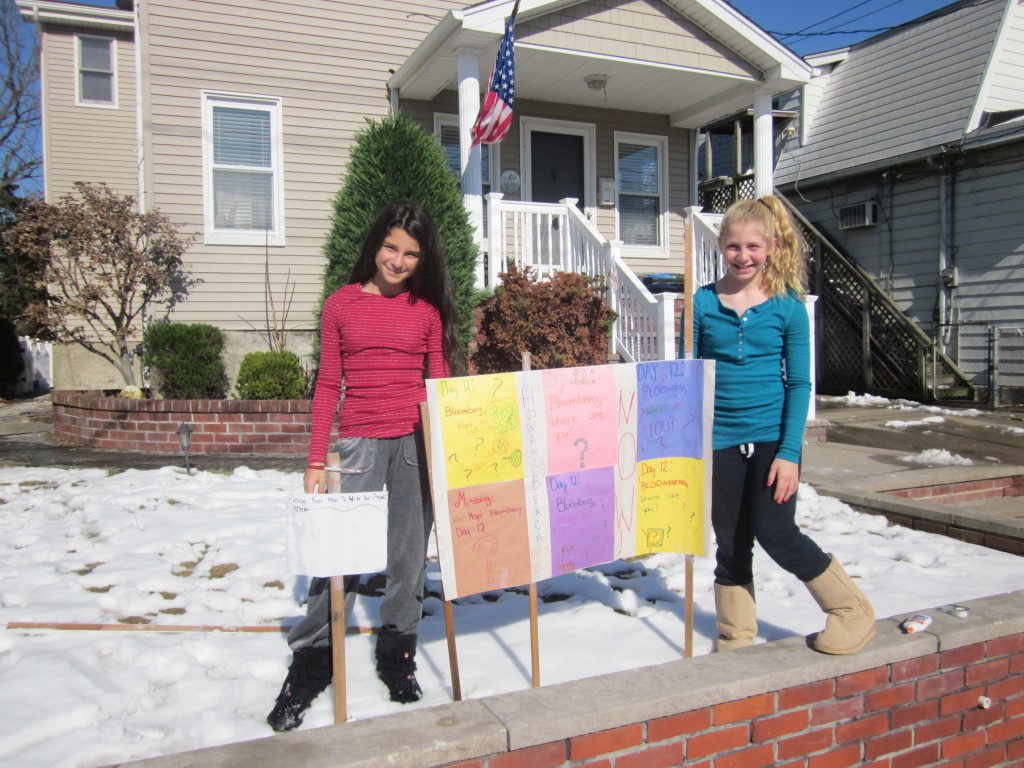 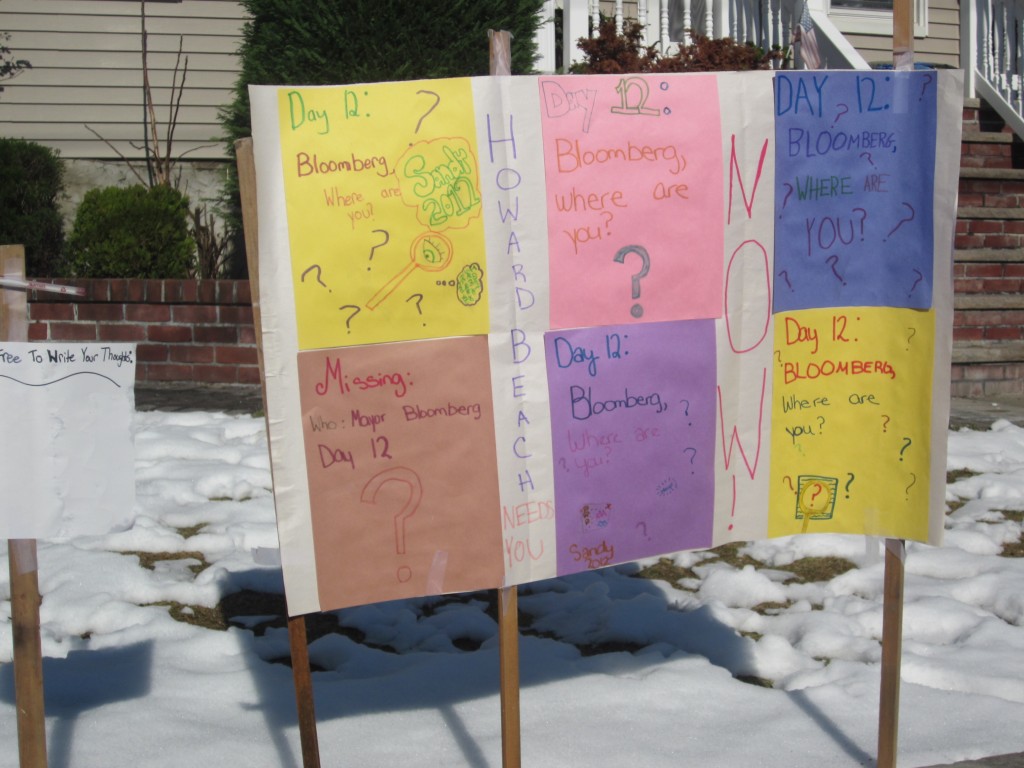 Left with no power, food, light, water frustrated residents of all ages found ways to convey their anger and displeasure with the mayor and city agencies. Photos Courtesy Laura Riley 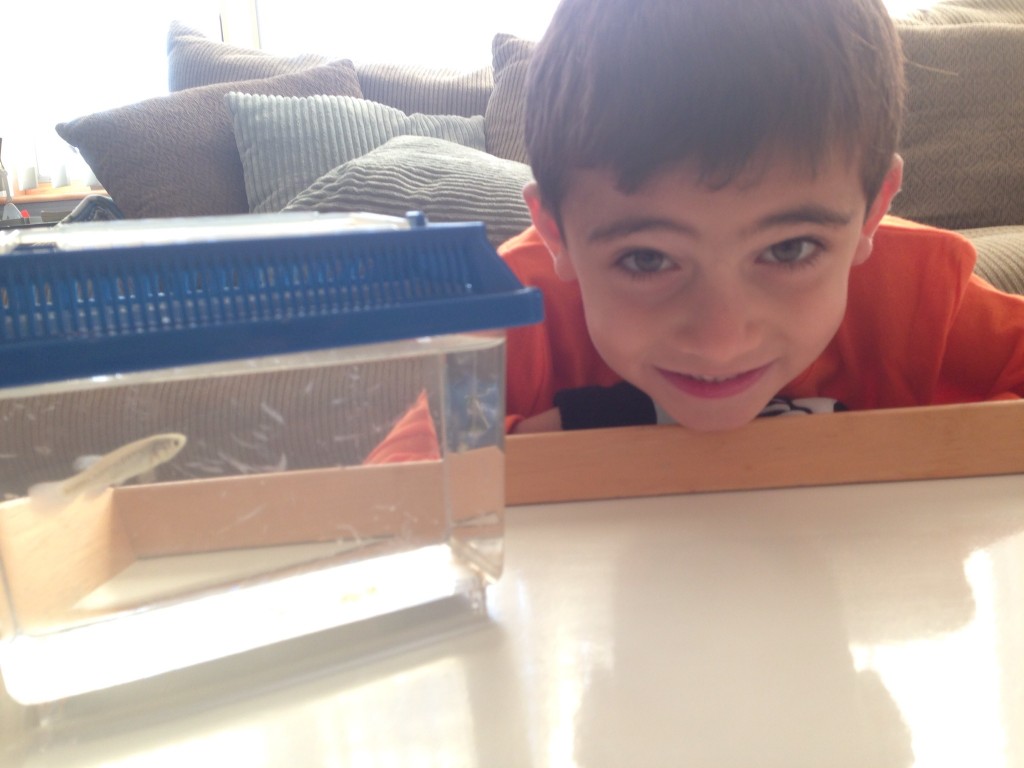 Our family, along with help from neighbors and friends, began cleaning up on October 31, 2012 after the water had mostly receded. My neighbor discovered a lively little fish while cleaning. She scooped it up into an empty water bottle and gave it to my 4-year-old Son Nickolas. He was so excited and wanted so much to keep it –needless to say, the fish now named Sandy, now has a home and our son, had a friend. With limited resources, we weren’t sure what to feed Sandy or how to keep her in enough water, so for the first few weeks, we would put a few Cheerios in her bowl, and as needed, we would use water, left over from the storm in our yard to fill Sandy’s bowl. We’re not exactly sure if she is from the bay or ocean but somehow she made it to us. We are happy to report, that Sandy is still the lively little fish she was one year ago, and we love having her as a part of our family! –Rosanne DeFino
Photo Courtesy Rosanne DeFino 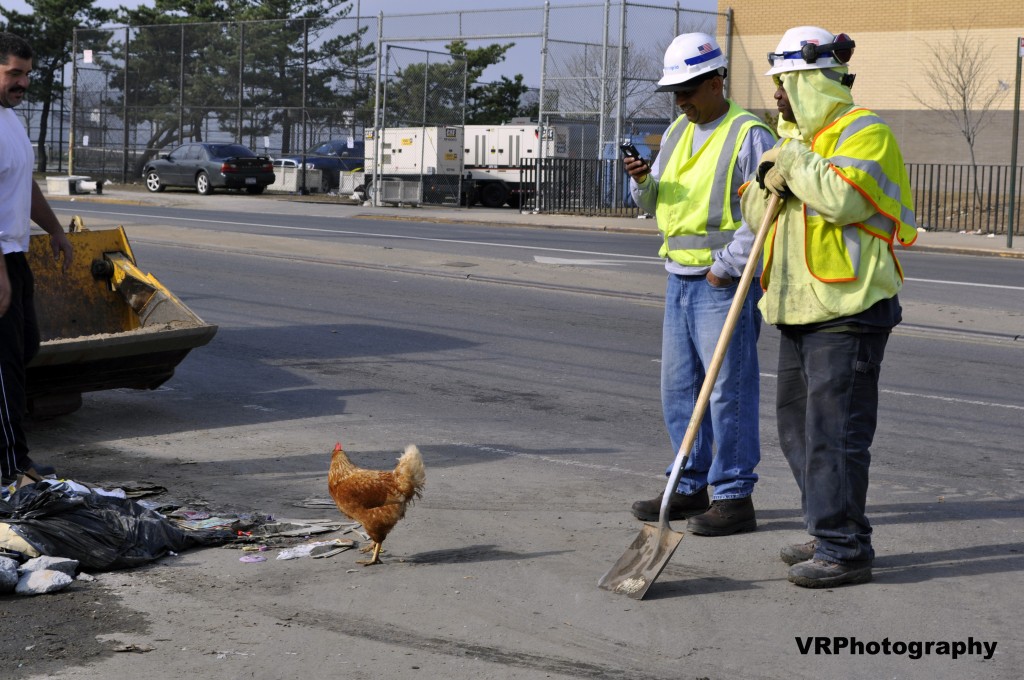 Do you guys still think it matters who crossed the road first? Chickens on the road, fish in fountains–the storm did it’s best to render all living creatures homeless Photo Courtesy Victoria Holt/VRPhotography 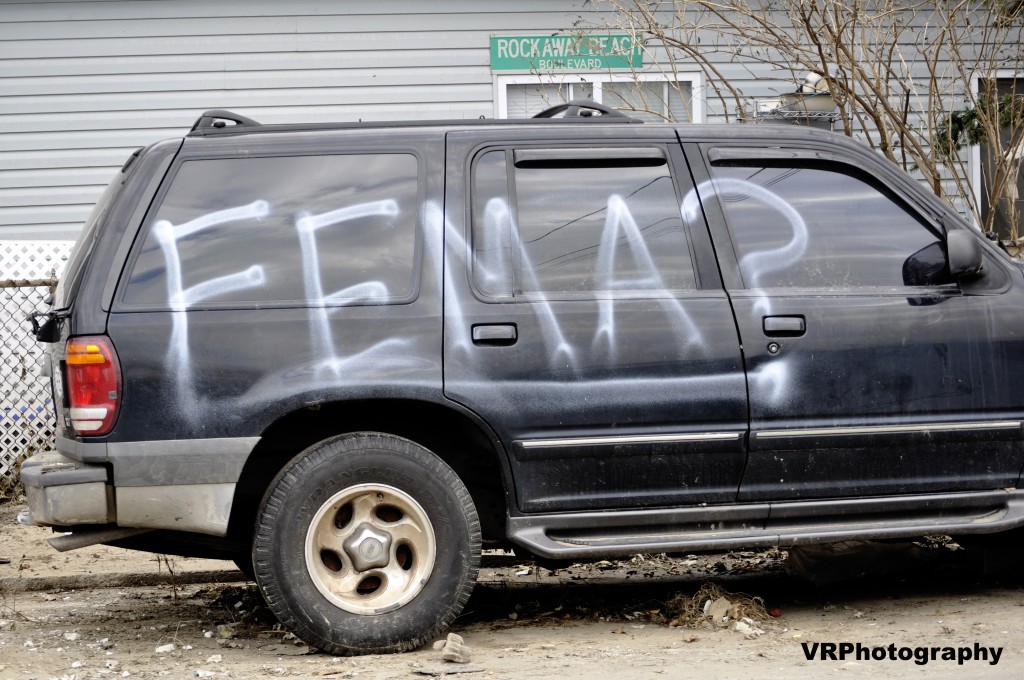 People throughout the storm ravaged area displayed their frustration over FEMA in many ways. Here an SUV with salt water to the dash, finds new purpose. Photo Courtesy Victoria Holt/VRPhotography

The Forum would like to thank each and every one of you for taking the time and sending us your thoughts, photos and memories. The overwhelming response we got to this issue was something we at The Forum will cherish for a lifetime. A very special thank you to all our contributors: