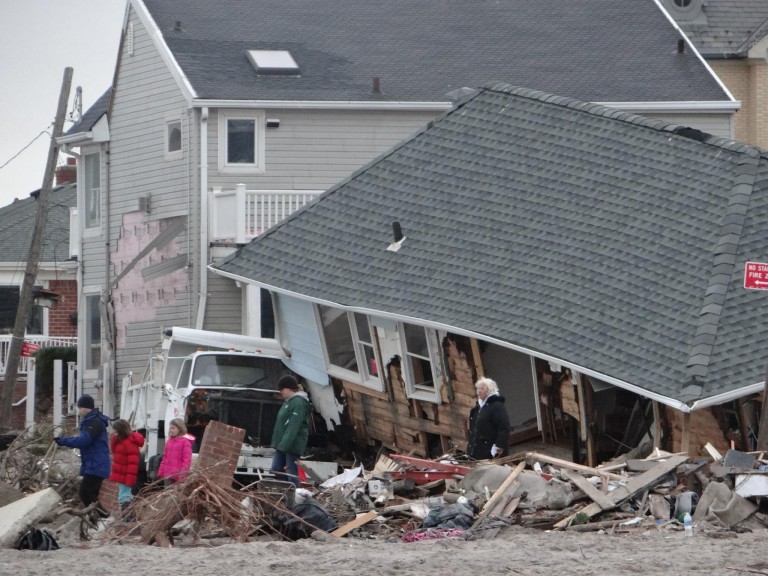 The fire that devastated Breezy Point left the area looking like what many residents called a war zone. Richard York/The Forum Newsgroup

For Breezy Point residents, the hum of constant construction in their neighborhood sounds like more than an orchestra of jackhammers and drills: It is the tune of something many thought may never happen again – normal life. 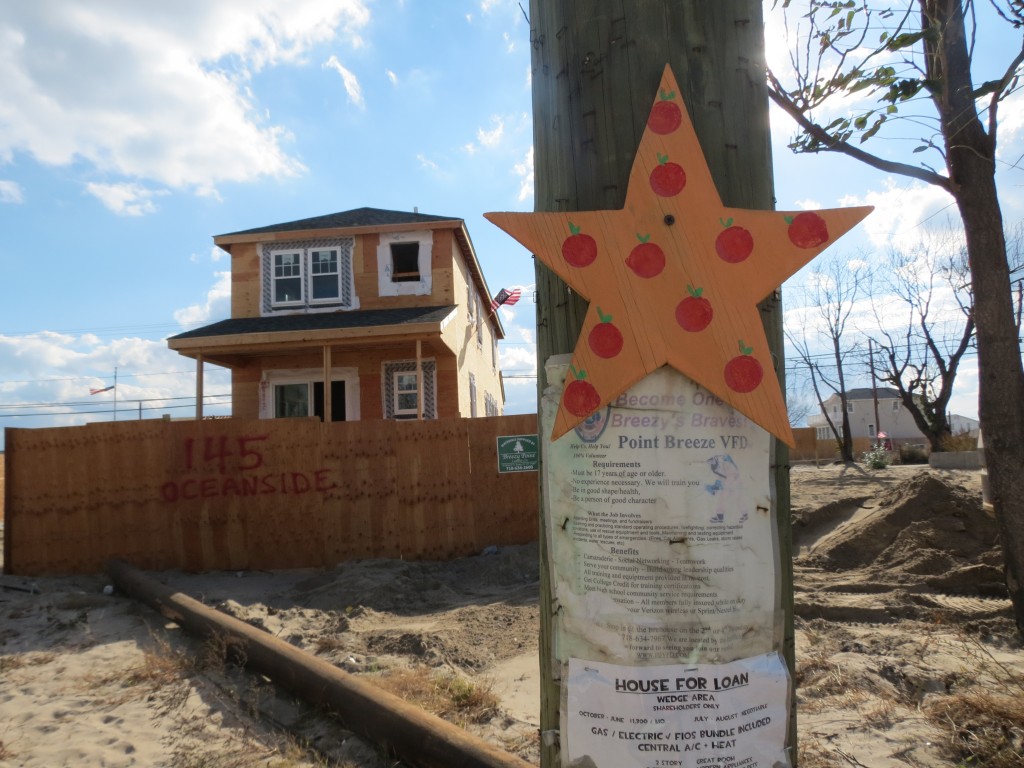 Residents said the constant buzz of construction in the neighborhood is making them feel hopeful that life could begin to return to normal. Anna Gustafson/The Forum Newsgroup

“We’ve come a long way in the past year – a long way,” said Arthur Lighthall, the general manager of the Breezy Point Cooperative, the organization that runs the community and is responsible for its maintenance, security and other needs. “The morning after the worst of the storm, seeing what had happened, I was devastated. The community was devastated.”

Hurricane Sandy slammed into Breezy Point at the end of October last year – and essentially reduced an entire neighborhood into debris and rubble, into piles of ruined wedding photos and letters from relatives long gone bleeding ink and videos of children growing up that could never again be watched. It looked like a war zone – and the images of the neighborhood quickly became one of the faces of Hurricane Sandy, with newspapers across the globe printing photos of residents’ charred memories.

In a matter of hours, the seaside community seemed to almost vanish, with 350 homes completely destroyed – including 135 in a fire that swept through the community and was unreachable by firefighters because of massive flooding from Sandy.

“At first, the storm didn’t seem like it would be that bad – the winds were bad but not severe in the beginning,” said Lighthall, a Breezy Point resident whose house was devastated by the storm and who had to seek refuge in Little Neck until he could finally return home six months after Sandy. “But then the lights were gone, the phones went out, and we couldn’t use our cell phones. The scariest part of the night was looking out the windows and seeing the glow of the fire.” 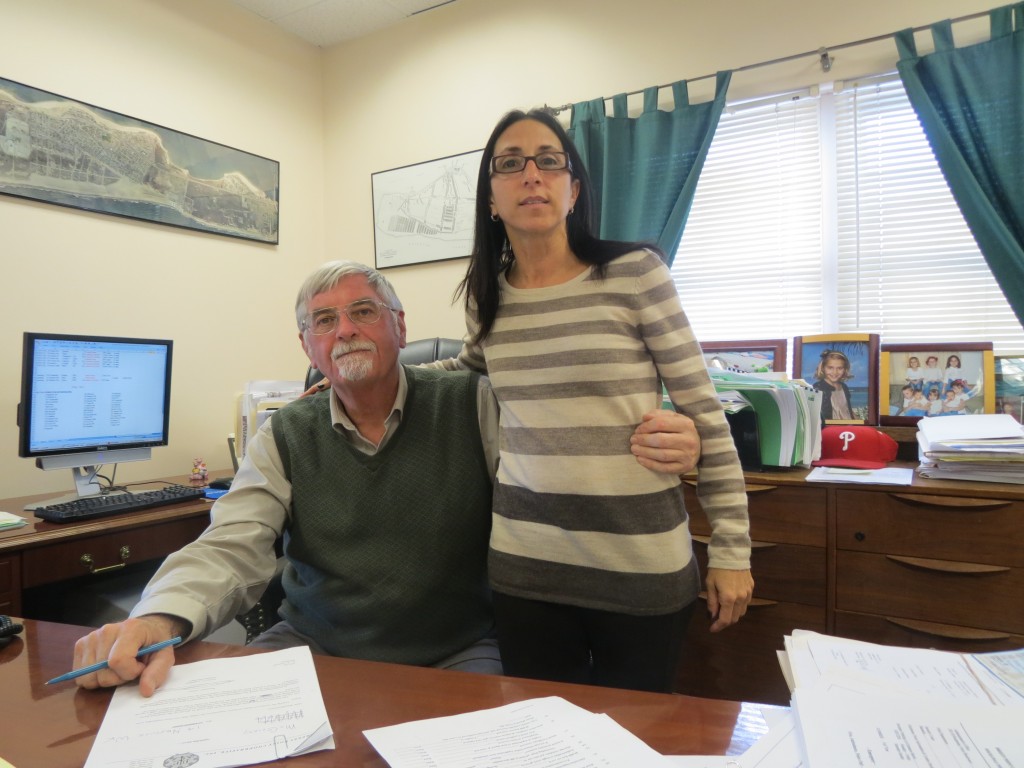 Breezy Point Cooperative General Manager Arthur Lighthall and Assistant General Manager Denise Neibel have been working around the clock to get people back into their homes. Anna Gustafson/The Forum Newsgroup

Remembering that night, Denise Lopresti-Neibel, the assistant general manager at the Breezy Point Cooperative, said there were about 60 residents seeking shelter in the coop’s main administrative building – and, as the flames appeared on the horizon, she and Lighthall knew if the winds did not shift the blaze would be headed directly for them.

“What were we going to do?” Lopresti-Neibel said. “There was four feet of water outside. Where would we have gone?”

Fortunately, the winds did shift and those inside the coop’s building remained safe. But, the next day, when residents began to assess the damage, it was almost impossible to understand just how much had been wiped out. How, where once rows of homes filled with families stood, the was now nothing but charred debris lining the beach.

“You know, we watched when Hurricane Katrina hit New Orleans, and you thought, ‘That’s awful,’” Lopresti-Neibel said. “But until you live it, you don’t really understand it. We understand it now.”

About 120 residents and business owners whose houses were destroyed in the blaze filed an $80 million lawsuit against the Long Island Power Authority and National Grid over the summer, arguing the failure to de-energize the power grid to the Rockaway peninsula before Hurricane Sandy hit caused one of the worst residential fires in the city’s history.

A collapsed home in Breezy Point after the hurricane. Richard York/The Forum Newsgroup

National Grid recently filed a response to the lawsuit that the homeowners’ attorney, Rockaway native Keith Sullivan, called a “slap in the face.” National Grid and LIPA filed a motion at the end of September to dismiss the suit and in part blamed the Breezy Point homeowners for the inferno.

“They’re blaming helpless victims,” Sullivan said in a previous interview. “It was shocking to see that.”

After the storm, homeowners began to wonder how long it would be before they could return to the place they loved. Until this summer, not one resident in the neighborhood was able to begin rebuilding because they had to receive a variance from the city Board of Standard and Appeals – a tedious and bureaucratic process that can take as long as a year and a half – before being able to apply for permits from the city Department of Buildings. The Breezy Point homeowners had to get the variance because their houses were not on maps used by the city to determine who could receive a building permit.

However, in July, Gov. Cuomo signed a bill sponsored by Assemblyman Phil Goldfeder (D-Rockaway Park) that waived the need to get a variance for one year for residents who experienced substantial property damage.

Now, while no family has been able to move back into their home, more than 35 homes are being constructed, and Lighthall said about 130 construction plans have been submitted to the cooperative for a new building. Another 50 to

60 plans have so far been submitted for significant repairs.

The shoreline, once cluttered with debris, is now a sea of construction vehicles and workers in hard hats.

And, soon, it will be a place recognized as a place residents once knew it to be: Home.

“We’re coming back,” Lighthall said. “People will be coming home.” 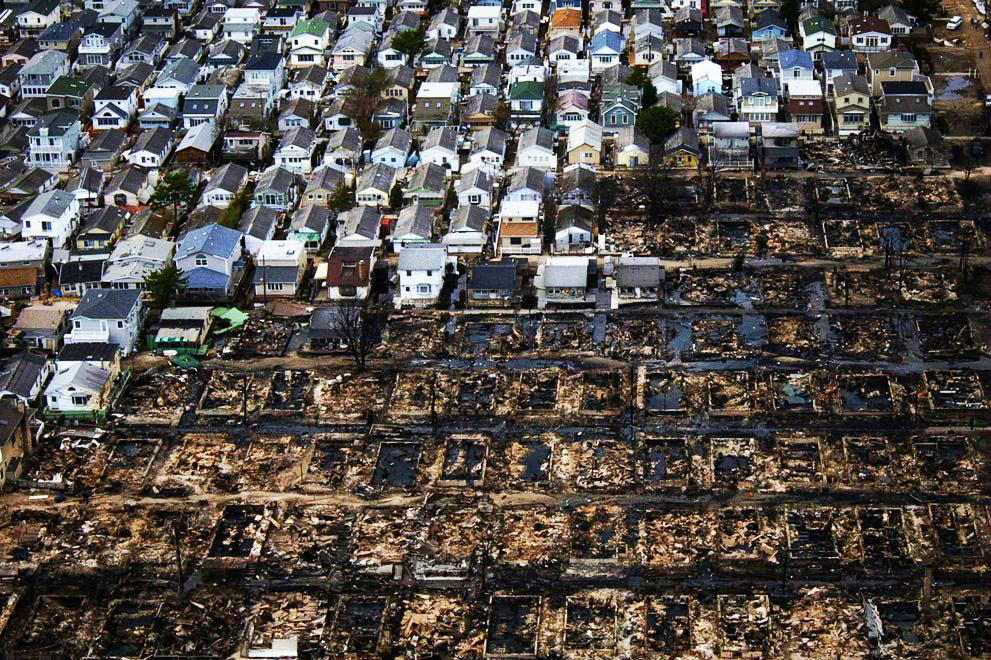 During Sandy, 350 homes were destroyed in the storm – including 135 in the fire. More than 2,000 homes were damaged, and 2,837 families were affected. File Photo