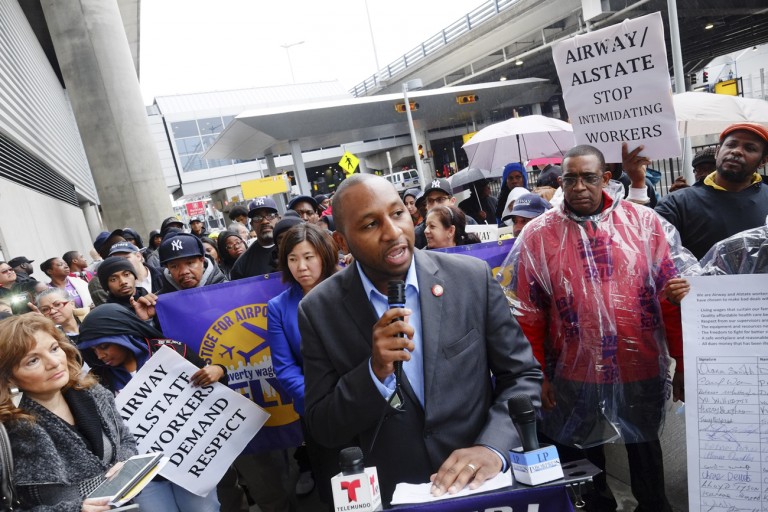 The stories of hardship came as fast as the rain slapping the concrete outside John F. Kennedy International Airport last Thursday – of a man supporting a family while earning $4.15 an hour lugging passengers’ bags; of a mother of two who, after working full-time at JFK for more than 11 years, makes $8.91 an hour cleaning Terminal 8; of another mother who supports her two young girls on $7.90 an hour.

They spoke of long hours and little pay, of rising early to trek across the borough to get to a job that gives them no health care and no sick time, of wondering how they would afford to support their families – and of being harassed by bosses when they spoke out against their conditions.

Shareeka Elliott makes about $12,000 a year as a full-time cleaner at JFK, leaving her with little money to take care of her two young daughters.

More than 100 people rallied outside JFK Airport last Thursday – and hundreds more protested at LaGuardia Airport this week – against two companies that workers and legislators are accusing of paying “slave wages” – and, in some case, even illegal wages.

“I’m 26 years old and I already have back problems from my job – and no health care,” Shareeka Elliott, a terminal cleaner, said at last week’s protest outside JFK. “I have two little girls, and I want to send my babies to college. I can’t do that on $12,000 a year. We need to eat; we need to move out of my parents’ home. I’m a young woman; life shouldn’t be like this. We need to live.”

Hundreds of workers are calling on Airway Cleaners and Alstate Maintenance – two of the largest private contractors at the city’s airports – to provide a living wage and benefits – including health care and sick time. More than 500 airport workers recently signed a petition asking the companies to do so – but after they turned the petition in last month, they said the companies have stepped up harassment and even laid individuals off.

After years of what workers said are poor working conditions, they have now turned to state Attorney General Eric Schneiderman and in October Alstate Maintenance skycaps – individuals who carry luggage outside the airport for tips – filed complaints with the attorney general’s office alleging their employer violated the state’s tipped minimum cash wage law. According to workers, they earn as little as $4.15 an hour, while New York’s minimum wage rate for individuals in jobs where they are tipped is $5.50 an hour.

Airway Cleaners and Alstate Maintenance did not return requests for comment. 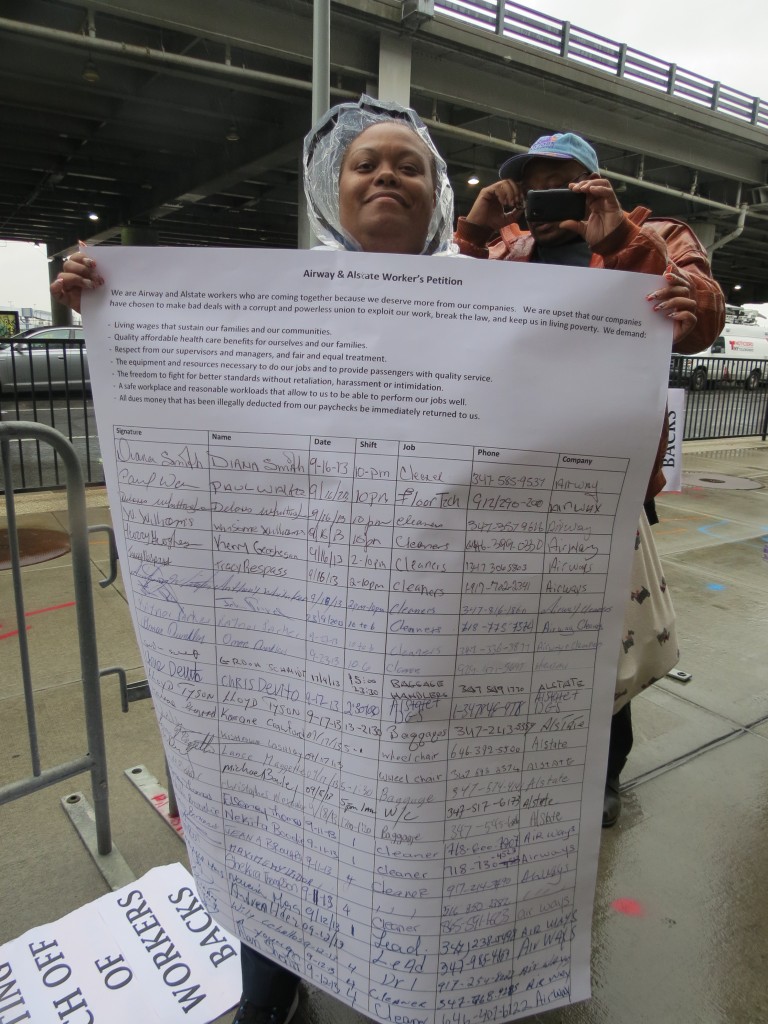 “I’ve been working at Alstate for six years, and I make $4.15 an hour,” said David Harrison, a Cambria Heights resident who works as a skycap at JFK. “The company provides us with cars, but we have to fix them ourselves. My cart’s wheels broke recently, and I had to take $40 out of my pocket to fix them. I ask you – is this fair?”

Legislators are throwing their support behind the workers, including U.S. Rep. Grace Meng (D-Queens) and Councilman Donovan Richards (D-Laurelton), both of whom attended last week’s rally organized by 32BJ SEIU – the country’s largest property service union – at JFK.

“We have heard multiple stories from these workers which are really disheartening,” Meng said. “…They have taken very brave steps, like signing petitions and going to the attorney general, just to make sure justice is served.

“You will not stand alone,” Meng continued. “We will stand with you every step of the way. Our city needs you, our Queens economy needs you, and our Queens families need you.”

Richards, who last weekend penned an op-ed in the Daily News about this issue, has called on the airlines, which contract with these private companies, to kick them out of the airports if they cannot provide a fair wage and benefits.

“If you can’t treat workers with respect, give them a living wage, and give them health care, then you don’t deserve to be here,” Richards said.

Over the last two decades years, airlines throughout the country have increasingly turned to private companies to run services like cleaning and carrying luggage. A new report from the University of California at Berkeley found that airlines outsourcing baggage porter jobs has more than tripled in the past 20 years – jumping from 25 percent to 84 percent – while the wages of workers dropped by 45 percent. According to the same report, 37 percent of cleaning and baggage workers live in or near poverty.

U.S. Rep. Grace Meng, center, is one of numerous legislators who is supporting workers in their fight against private contractors who are accused of doling out jobs with low wages and no benefits.

The private companies that employ people at JFK and LaGuardia have gotten into legal trouble elsewhere, and in September, Massachusetts’ attorney general cited Airway Cleaners, which shares common management with Alstate, with violating the state’s wage and hour laws by failing to make timely payments of wages to workers at Logan International Airport from 2008 to 2012. The attorney general ordered the contractor to pay workers restitution of back wages.

Workers at JFK said they would like to see back wages, though, at this point, they said they’d be happy just to receive a living wage and benefits.

“I’m proud of my work as a cleaner – which I’ve done for 11 years,” said Maria Rodriguez. “But, even working full-time, I can only afford to live in public housing with my two children. I hope one day my co-workers and I will have a better life.”