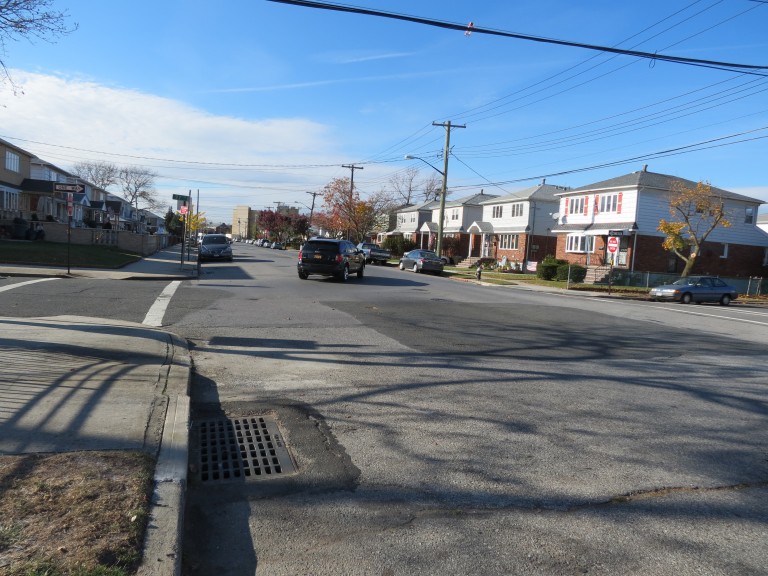 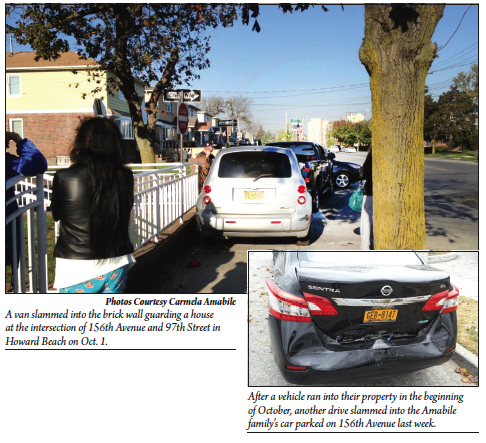 Passing the well-kept two-story homes along 156th Avenue in Howard Beach, it is hard to notice something is amiss: The lawns are tidy, the fences are painted, the autumn decorations are out.

But, had one come by 156th Avenue near 97th Street on Oct. 1, there would have been a very different scene – and one that has played out before: A vehicle perched on the sidewalk after ramming into a brick wall guarding a yard where children no longer play for fear they could be hurt.

“It’s terrifying,” said Carmela Amabile, who lives with her husband and children on 156th Avenue near 97th Street – and whose property was hit by the car on Oct. 1. “People don’t allow kids to play in the front yard. Our kids don’t go out there anymore.”

Following a spike in speeding drivers and accidents, residents living near the intersection of 156th Avenue and 97th Street in Howard Beach are urging the city to place a four-way stop sign in the area.

Amabile and her family have lived in the neighborhood for close to 20 years – but it has only been in the last couple years that they have harbored serious concerns about their safety because of cars speeding in the area. Two years ago, a car slammed into the property, then there was the vehicle that crashed into the brick wall in the beginning of last month, and last week a van slammed into Amabile’s husband’s parked car – a series of incidents that have left the family to deal with thousands of dollars in damage.

Many of those living in the neighborhood are fed up with the situation and are calling on the city to, at the very least, look into installing a four-way stop sign at the intersection of 156th Avenue and 97th Street. Last year, more than 150 people signed a petition to get a four-way stop sign – but Amabile noted the petition happened just before Hurricane Sandy and was likely forgotten about in the aftermath of the storm. Now, residents are working with Councilman Eric Ulrich’s (R-Ozone Park) office to see if they can pressure the city into changing the intersection before someone gets seriously injured.

“People come flying down 156th Avenue,” Amabile said. “There are so, so many near misses. What do they want, to wait until someone gets hurt to do something?

“This is something the entire neighborhood wants,” she continued. “All summer long you heard screeching and banging.”

Neighbors said the spike in traffic in recent years could be attributed to the Resorts World Casino New York City, which opened at 110-00 Rockaway Blvd. in South Ozone Park in 2011.

Since that time, residents said there has been an influx of cars in the area – and particularly vehicles that speed through the residential area that is jampacked with children and families.

Those living near the intersection of 156th Avenue and 97th Street aren’t the only ones who have been worried about speeding cars and accidents. Residents on nearby Bridgeton Street in Howard Beach recently compiled a petition signed by nearly every resident on the street  to change traffic in the area in order to address what individuals say are unsafe conditions on the block.

Bridgeton residents are asking the city to reverse the direction of the street so drivers would not be permitted to make the left turn off 155th Avenue onto their street. Ulrich is also working with residents on this issue.