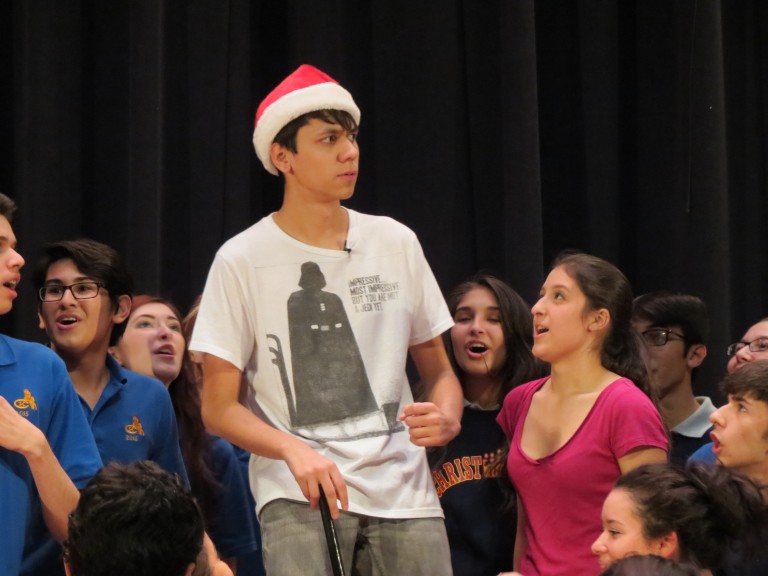 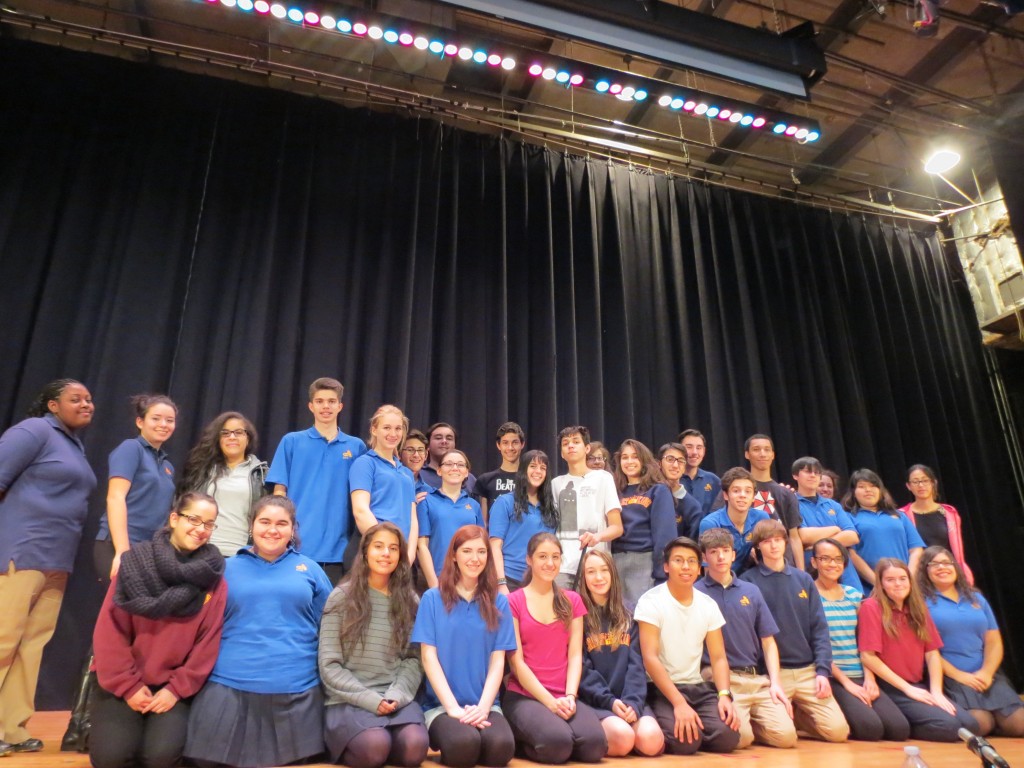 Students gather for one of the last rehearsals before their five-show run of “A Christmas Carol” debuts Friday. Anna Gustafson/The Forum Newsgroup

As students whirled around the stage in the Hugh P. Kirwan Perform Arts Center at Christ the King Regional High School in Middle Village in a frenzy of dance and song on Monday, they gazed upon an auditorium that, come Friday evening, will be teeming with friends, family, community members, and theater lovers of all kinds eager to see the school’s first ever performance of “A Christmas Carol.”

About 65 students from the Christ the King Theatre Production group have since August been preparing for Friday, Dec. 6, when they will put on a musical version of Charles Dickens’ beloved 1843 tale of the miserly Ebenezer Scrooge and his emotional transformation following visits from Scrooge’s former business partner, the deceased Jacob Marley, and the Ghosts of Christmas Past, Present, and Future.

Students work on the show’s lighting and sound.

“I really liked seeing how it was adapted to a musical – that has reinvigorated the story,” said Max Lamadrid, who plays Bob Cratchit – Scrooge’s overworked and underpaid clerk.

Like fans of “A Christmas Carol” for more than a century and a half, students said they believe the story speaks to a message close to their own hearts: The importance of family.

“There’s the idea that you should be spending Christmas with people who love you,” said Joseph Ortega, who plays the miserly Scrooge.

“It shows you to never let the people you love go,” added Megan Gonzalez, who plays the Ghost of Christmas Future.

Launching rehearsals in August, the students – from the actors to the stage crew – have spent countless hours together, creating an experience that has not only cemented the idea that they want to spend their lives on, or behind, a stage, but which has brought the pupils together in a very different way than happens in regular school classes.

“You get to spend a lot of time with people who share the same interests as you,” said Daniella Cariola, who is in charge of the sound for the show.

The production’s co-directors, John Bellington, left, Heather Arzberger, and Frank DeBiase said they have been thrilled to watch their students grow during the months of rehearsals.

Montana Balzer, who is in charge of lighting, and Richard Tuske, the stage manager, also noted how close everyone has become – from those on stage to those off.

This production is one of numerous shows performed by the Christ the King Theatre Production group, which was founded during the 2004-05 school year and has since put on such performances as “Grease,” “Sweeney Todd,” and “Phantom of the Opera” – for which they were the first school to receive royalties from Broadway composer Andrew Lloyd Weber.

Alongside the students, parents and other community members are frequently part of the performances – for example, in “A Christmas Carol,” a number of area residents are part of the 22-person live orchestra that plays during the show.

After beginning with about 13 students in 2004, interest in the theater group has skyrocketed and more than 60 pupils are now part of the organization. A number of graduates of the program have gone on to professional theater groups.

Joseph Ortega, who plays the miserly Scrooge, rehearses on Monday.

“We try to give them a professional experience,” said Heather Arzberger, who co-directs the production alongside John Bellington and Frank DeBiase – three people on whom Christ the King Regional High School President Michael Michel lauded.

“Without these three people, it would’ve never been the success that it is,” Michel said of the theatre program.

Watching as the students began hours of practice on Monday, Bellington and his co-directors said they could not wait see the culmination of the months of hard work this weekend.

“We’ve seen them grow, and we’ve seen how talented they are,” Bellington said of the students.

Tickets for the general public are available for purchase by visiting www.showtix4u.com or www.ctkny.org.

Christ the King High School students in the performance said they have bonded with their classmates while spending hours together rehearsing for the production.