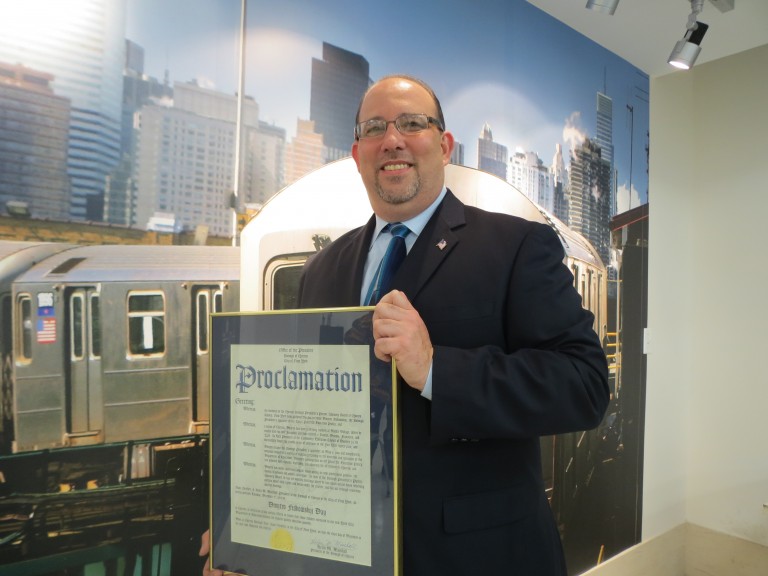 For the parents, school representatives and other education officials gathered at Queens Borough Hall Tuesday evening, the message for the incoming mayoral administration was simple: It’s time for change.

Year after year, members of Queens Borough President Helen Marshall’s Parent Advisory Board said, parents, teachers and civic leaders have routinely been snubbed by City Hall – and have witnessed art, music and foreign language programs being wiped from schools, an overemphasis on standardized testing decimate learning, a preoccupation with data drive teachers from the profession, and parent participation in the school system plummet in the wake of feeling as though City Hall could, at best, barely tolerate them, and, at worst, actively work against them. 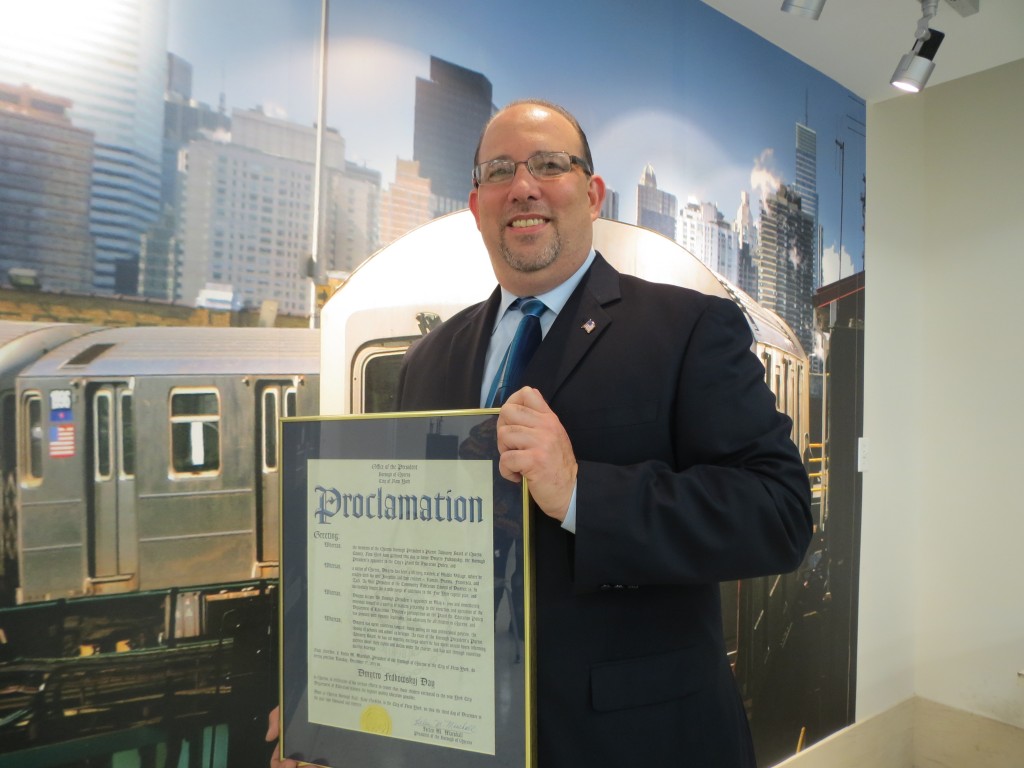 Dmytro Fedkowskyj, who chairs the Parent Advisory Board and is Borough President Helen Marshall’s appointee to the Panel for Educational Policy, was honored by the borough president, as well as Councilwoman Elizabeth Crowley, both of whom gave Fedkowskyj proclamations for his work on the PEP. Anna Gustafson/The Forum Newsgroup

“There’s a new mayor, a new administration – things will hopefully be different,” said Dmytro Fedkowskyj, who chairs the Parent Advisory Board and is the borough president’s appointee to the city Panel for Educational Policy.

Advisory board members voiced a long laundry list of things they hope will change under de Blasio – the first new mayor in 12 years and only the second one in the city’s history to assume mayoral control of the city’s public schools – from alleviating the overcrowded classrooms that plague much of the borough to having parents’ concerns be heeded by a responsive City Hall and city Department of Education. The members’ ideas were documented and will be passed on to Borough President-elect Melinda Katz, who, along with de Blasio, will take office Jan. 1.

A number of those at Tuesday’s meetings said, with numerous Queens schools operating at over 100 percent capacity, overcrowding must be addressed. A notorious problem in Queens, overcrowded conditions in borough schools have translated to pupils taking classes in trailers and even closets, students eating lunch in the early morning hours, and illegal student to teacher ratios.

Part of the area Crowley represents includes school District 24 – the most overcrowded district in the city that faces a shortage of nearly 5,000 classroom seats. District 24 includes schools in Corona, Elmhurst, Glendale, Ridgewood, Maspeth, and Middle Village.

Isaac Carmignani, president of Community Education Council District 30 – which includes schools in much of western Queens, also stressed that he hopes the new administration will address the packed classrooms, noting that, “where we abut [District] 24 is where we have all these issue.”

“We need buildings in that area,” Carmignani said of the area bordering District 24.

Parents from all corners of Queens also blasted the Bloomberg administration and the DOE for what they said amounted to a blatant disregard for their input.

“There seems to be no accountability, no checks and balances – all the decisions are very driven by the DOE,” said Deborah Dillingham, president of Community Education Council District 28 – which covers schools in Forest Hills, Rego Park, and Jamaica. “In the past few years, parent participation has really decreased.”

Dillingham also noted that access to foreign language programs in Queens schools has decreased under Bloomberg, with some schools slashing the number of years that pupils must take a foreign language from four to one. A number parents noted that music and art programs have gone by the wayside. 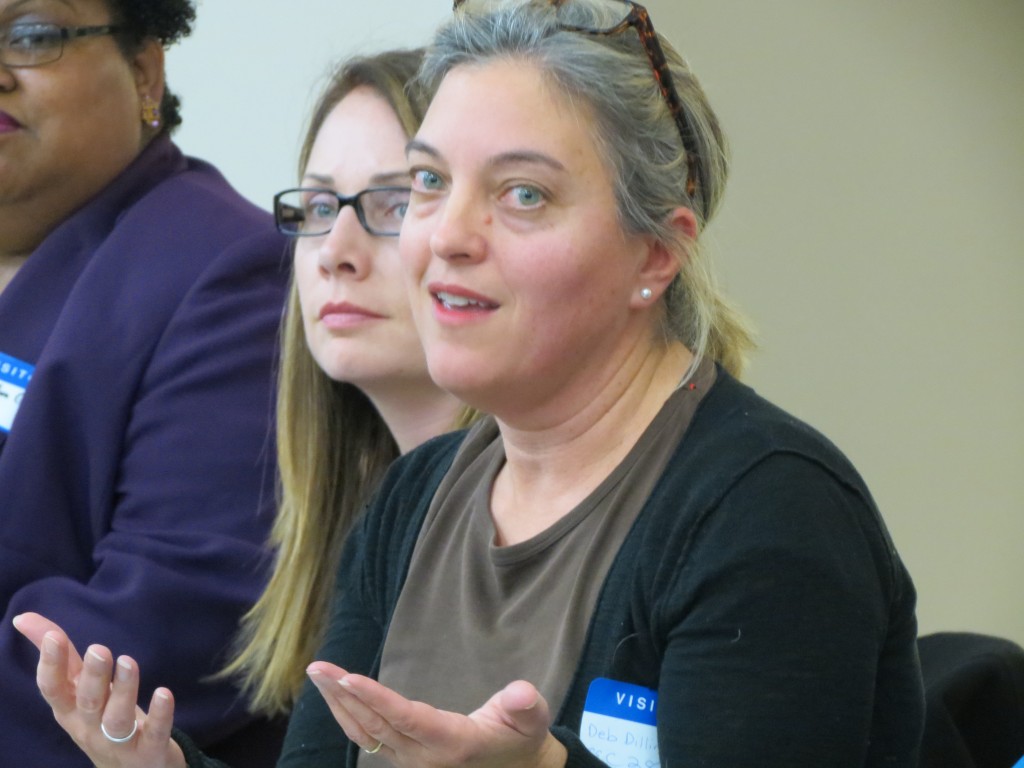 “Music and arts – what happened to those?” said Community Education Council District 29 member Feline Lazarus. “It really deprives children to not have the arts.”

Fedkowskyj noted that the significant drop in art and music programs resulted from the city DOE removing the budget line item for the arts, which allowed schools to decide how much funding to allocate for those programs.

Other parents, including Community Education Council District 24 member Lucy Accardo, said the frustration they have felt in recent years has many feeling helpless and wondering if any of the work they do in various educational organizations, such as the CECs, is ever paid attention to at City Hall – or, more specifically, at Tweed Courthouse, home to the city DOE.

“Parents are demoralized; there’s less parent involvement,” said Accardo, whose statement was followed by another parent yelling, “decentralization, anyone?”

To better enhance parents’ voices, Dillingham, as well as other parents, said the makeup of the city Panel for Educational Policy – a decision-making group that votes on education plans, including school closures and co-locations – needs to change in order to better reflect communities’ wishes. The PEP is often seen as a rubber stamp for Bloomberg, as the panel has never voted against the mayor – who appoints the majority of the board’s members. The PEP, for example, has voted to approve the closures of large community high schools throughout the city, including the more than century-old Jamaica High school, and replace them with smaller schools that those at the meeting criticized for being administration-heavy and too interest-specific.

“There are way, way too many high schools to choose from now,” said Paola de Kock, president of the Citywide Council on High Schools. “If you go to the high school fairs, they’re a mad house. …Community high schools, that’s where you see a variety of programming.”

While many parents lambasted the PEP, they lauded Fedkowskyj – a frequent critic of the Bloomberg administration who parents, civic leaders and legislators alike have praised for consistently working to address educational issues throughout the borough.

A number of parents stressed they hope Katz will keep Fedkowskyj on as the appointee to the PEP. The borough president-elect has not yet announced who she will choose as her appointee.

Assemblywoman Cathy Nolan (D-Ridgewood), who chairs the state’s Education Committee, too heaped praise on Fedkowskyj and said “it has been a joy to have a collaborative relationship” with him and Borough President Marshall.

“I always did my best to represent your values and hope that you will remember me as a fighter for the kids of Queens and New York City,” Fedkowskyj said at the meeting. “And although I was involved with so many issues, both visible and invisible, what I would like people to remember most about me is that I was fair, reasonable and a fighter – and that I was able to get things done, working with the majority of PEP members controlled by the mayor.”