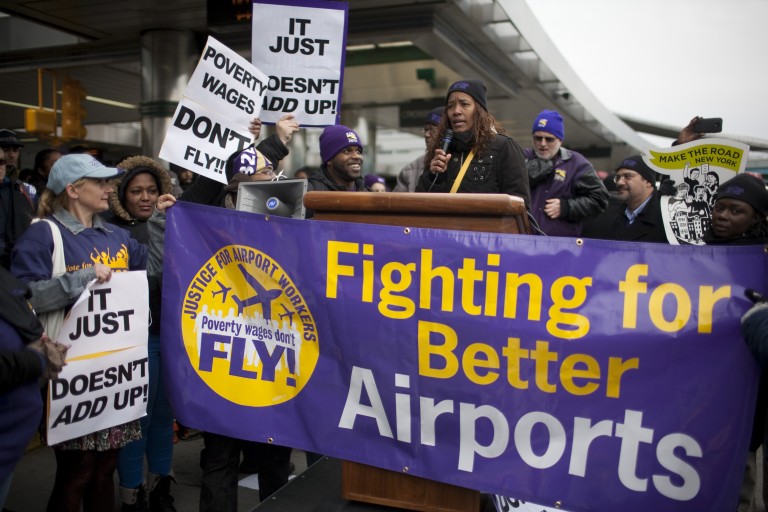 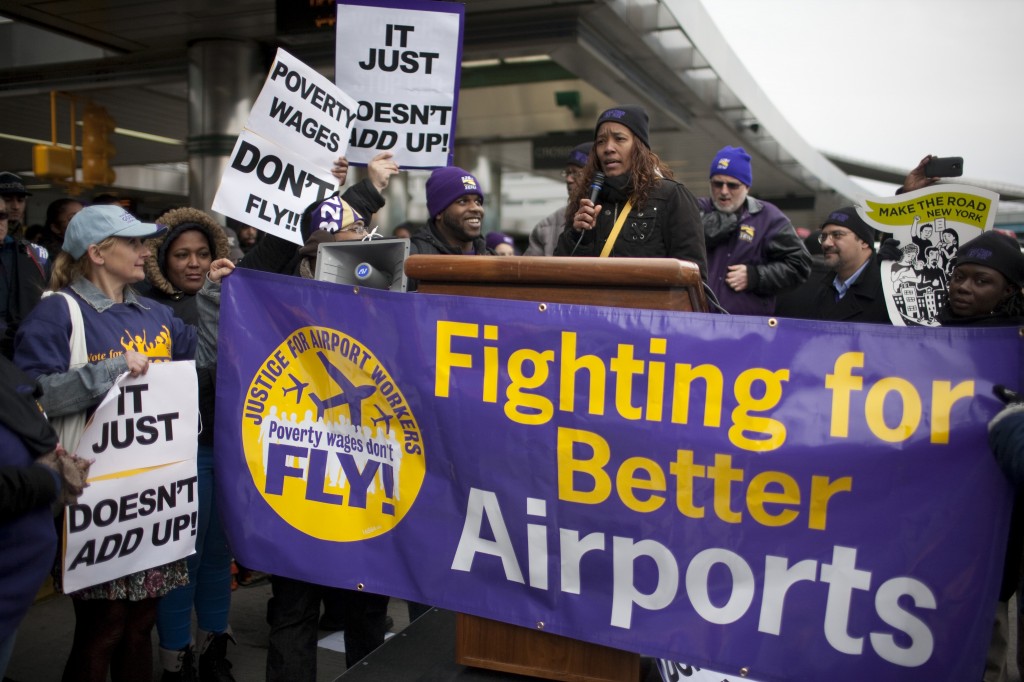 Throughout much of this holiday season, workers at LaGuardia, pictured here, as well as JFK International, have been protesting what they said are egregious working that include poverty level wages. Photo Courtesy Dave Sanders, 32BJ SEIU

Thanksgiving week brought a greater security presence to LaGuardia Airport, but not for obvious reasons.

More than 700 airport workers rallied throughout the day at the Queens transportation hub last Tuesday, demanding better working conditions through a raucous public rally during one of the busiest travel weeks of the entire year. The workers’ voices were heard so clearly that they were barred from protesting in the following days after LaGuardia brought in more security officers to keep the peace.

“The workers came out this week and showed the public that poverty wages don’t fly,” said Jose Santos, organizer with the service workers union 32BJ SEIU. “We’re not here for pennies. It’s time these workers get better standards.”

Santos said the week’s protests led to several workers being escorted away from the airport by police, but that did not stop them from petitioning passengers throughout LaGuardia as the week went on. Their message still remained in bold lettering to drivers passing underneath the 94th Street, where a banner read, “LGA Poverty Wages Don’t Fly.”

Mercedes Ramos said she has commuted from Long Island City five days a week for 12 years to clean airplanes before and after takeoffs for $7.50 an hour and has yet to be given adequate sick and vacation days.

“If I get sick, I have to decide to either work sick or stay at home without pay,” she said.

While using Santos as a translator, the Dominican Republic native Ramos said airport employers with three major companies used “fear factors” to keep more than 1,400 workers from speaking up against unfair working conditions there. But the protests did not start there.

Ramos and her union representatives called out three of LaGuardia’s largest companies they said employ workers for poverty wages without a contract, including Air Serv, Aviation Safeguards and PrimeFlight. The union has been zeroing in on low-level jobs being doled out at the city’s major airports for over a year and pressuring airlines to force contractors to pay higher wages.

“Workers are saying that the boss holds all the marbles,” Santos said. “Workers have been dismissed for petty stuff. We want to sway that balance.”

Similar demonstrations have been held at all three major metropolitan airports, including John F. Kennedy International Airport and Newark Liberty International Airport in New Jersey. Over 100 airport employees held a similar rally outside JFK earlier last month against two of the major companies overseeing the labor there. In all, Santos said the union’s movement encompassed more than 20,000 workers across all the major airports.

Protests got so heated last year that workers at JFK threatened to strike in the days leading up to Christmas – another hectic traveling time nationwide. But when asked if a similar type of action was being considered this year, Santos said the union was not ready to make another bold move.

“We’re not looking into extremes just yet,” he said. “All we are saying is that the money is there. The airlines made over $20 billion last year, yet nothing has been given to the workers.”

Airport officials celebrated a $1.4 billion expansion to JFK Airport’s Terminal 4 earlier this year and LaGuardia was also slated to undergo a $3.6 billion makeover set to usher in infrastructure improvements and a new terminal.