Kristian DiStefano shares a moment with his sister Arieanna DiStefano-Buonpastore. Having celebrated her 21st birthday only 2 days before on December 3, a grateful sister said there could have been no better present than to have her big brother home. Patricia Adams/The Forum Newsgroup

A grand welcome home was staged for United States Army Sgt. KristianPeter DiStefano last Friday, when a host of family and friends, a color guard and a bevy of elected officials welcomed the Howard Beach native back from his fifth tour in active combat.

A career solder who began his time in the army after enlisting 9 years ago, DiStefano, 27, will visit with his family until he returns to base to re-up his training in early January.

“I didn’t want to go to college,” is the quick response, when asked why at 18-years-old, to why he chose to enlist.

He later developed a taste for academics and now holds a Master’s Degree in Civil Engineering, a Bachelor’s Degree in U.S. History and an Associate Degree’s in the History Of War and Art History.

In addition to the academic achievements, there are multiple Army commendation medals, medals for good conduct and skill badges in numerous fields. And then there is the one award that perhaps speaks more of DiStefano’s character and persona than even those he actually wears on his uniform—the purple heart which he declined. “I was not taking a medal for something where my buddies got hurt worse than me.”

His service began in 2005, a month after high school graduation. After completing his training he spent time on bases across the country, acquiring special skills and developing combat readiness, including an extended stint in an Air Borne division.

“I really like jumping out of planes—but you have to be careful.”  A smile is accompanied by pointing to a large scar running along the side of his head. “We were testing parachutes and mine opened a little late,”—DiStefano found himself face first in the side of a mountain.

But the scars of that injury, and others—he has been shot in the chest, stabbed and “blown up” in nearly two dozen episodes involving explosives—are not the deepest scars. Those that remain unseen, camouflaged and hidden in the recesses of the mind, are the ones in desperate need of attention. They are what now fuel his personal mission.

Diagnosed last year with Post Traumatic Stress Disorder (PTSD)—two separate cases of it—it is now one of his life’s goals to see that people realize what the disease is and the dire need to address it.

A condition complicated and fueled by rage and anger issues, experts say there have been nearly 40,000 cases diagnosed among soldiers since 2003. The number is believed to be even higher because many soldiers keep their illness a secret.

His own diagnosis came as a result of three Traumatic Brain Injuries (TBI), caused by incidents involving explosives and from the stress of bearing witness to the horrors of war and the loss of comrades.

“Amazingly people fail to see this as a real disease and how devastating it is to those in search of understanding and help.” 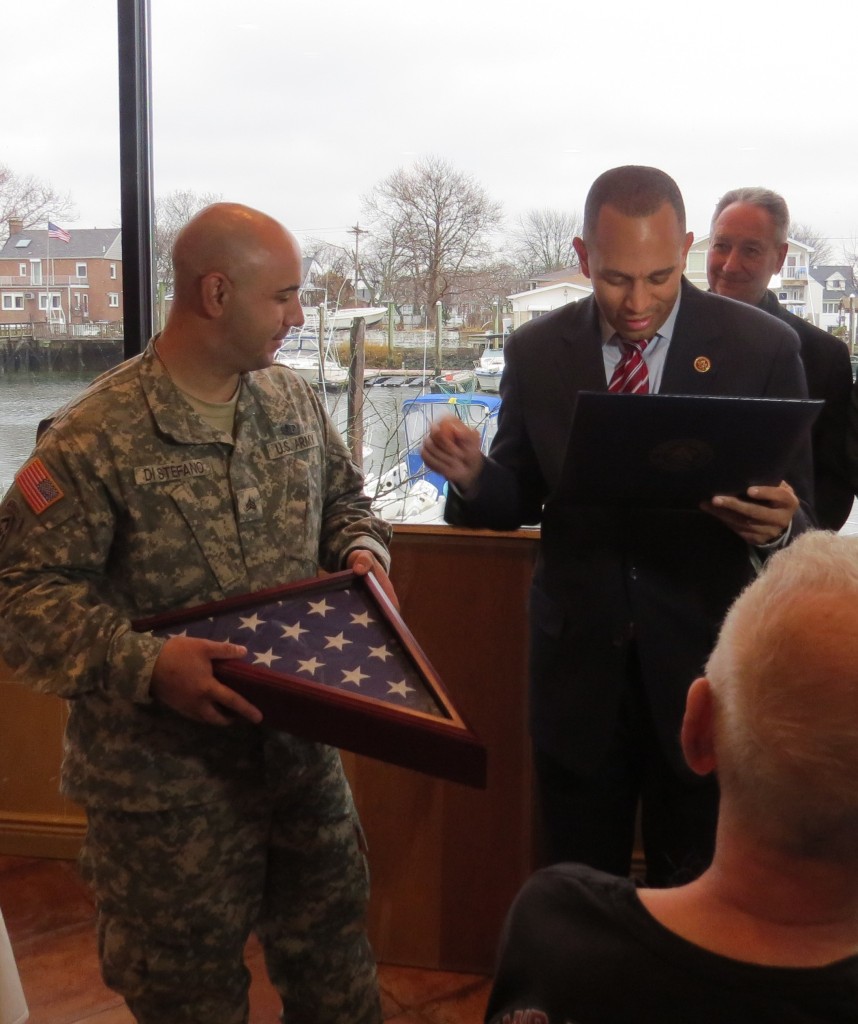 Congressman Hakeem Jefferies presented Sgt. DiStefano with a United States flag flown over the Capitol in Washington D.C. in his honor.

Now on medication and in treatment, he says things are much better and manageable, but is quick to caution. “In order to get help, you have to recognize what’s going on. And you have to have a place to turn.”

He makes note that troops serving after several tours of duty are especially vulnerable and susceptible because of the dramatic increase in repeated stresses. Not only are some serving multiple tours, but tours were extended to 15 months instead of the usual 12, because of escalated combat conditions in both Iraq and Afghanistan.

He will spend much of his time off helping members of his unit adjust to life at home. “When you are used to spending every day with thirty guys–risking your life next to them every day–it can be a little taxing to come home and settle into life with a picket fence. Indeed that is a fact well represented in divorce statistics–a ridiculous 48% overall in his unit.

Nevertheless it in no way deters him from what he knows will be the rest of his career. “This is what I signed on for. To work for my country.” But helping his country may be a little short of describing exactly what DiStefano has done for the last few years as a Route Clearance Specialist.

Although the job title sounds benign enough, the meat and potatoes of what his every day is comprised of is clearing roadways of explosives so that troops can pass through safely.

His unit is the first to step into unchartered territory in search of bombs that can be anything from small homemade bombs to 500 lbs. of prime explosives designed to take out everyone in sight.  In fact, the unit has cleared enough roadway to wrap around the equator twice.

He recalls stepping on a land mine, “It was defective. I remember thinking, this must have been one of the cheap ones,” he shrugs his shoulders, “It just failed to work.”

His uncle, Anthony Buonopastore, was not so lucky. He stepped on a land mine in Vietnam, 1968—it took everything from the waist down and one of his arms. “My uncle is a hero,” DiStefano says.

But the joy of coming home for leave is not without painful complication.

A recent mission took the life of friend and mentor Sgt. FC Ricardo Young, 37, who replaced DiStefano on a mission into the mountains. He was killed in a fire fight and the unit had to retreat quickly, leaving his body behind. “The worst thing was not being able to do anything. You don’t leave a soldier behind. You just don’t do that.”

The conversation pauses while he rolls up his sleeves. Pointing toward his name or initials in tattoos on both arms, he explains, “I have these identifiers on all my extremities, and here, he rolls down his bottom lip to expose the marking inside, “If anything happens, they will be able to identify whatever they find. My mother will get something to know I came home.”

And so for the man who arrived to fanfare and a well deserved hero’s welcome, including the presentation of the U.S. flag flown in his honor over the nation’s capital, at the request of Congressman Hakeem Jefferies, there is an undeniable air of bittersweet.

He talks of the good and he talks of the bad. The best, he says, are those care packages from his mother and everyone she gets to send them. “It’s so great to get mail––especially mail with sausage in it,” he laughs.

Despite the conditions faced in every 16-hour-average day–– he remembers the hottest temperatures he saw,145 degrees in Iraq and 138 in Afghanistan, despite the inability to sleep because of rats crawling over you or the difficulty in climbing mountains with a minimum of 65 pounds of equipment and weapons, or the lack of adequate food, clean water and medicine––despite all of it, Di Stefano unhesitatingly answers the most obvious question––Why would you?

“In no other place in life can you be both a mentor and a student of such consequence in life at the same time.  And in the end if you have protected freedom and saved lives, you did your job. You helped your country. For me that’s enough.”