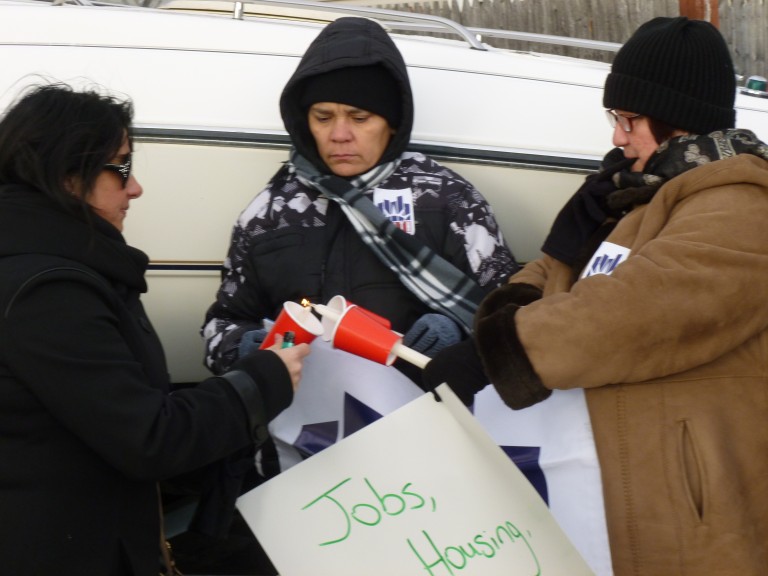 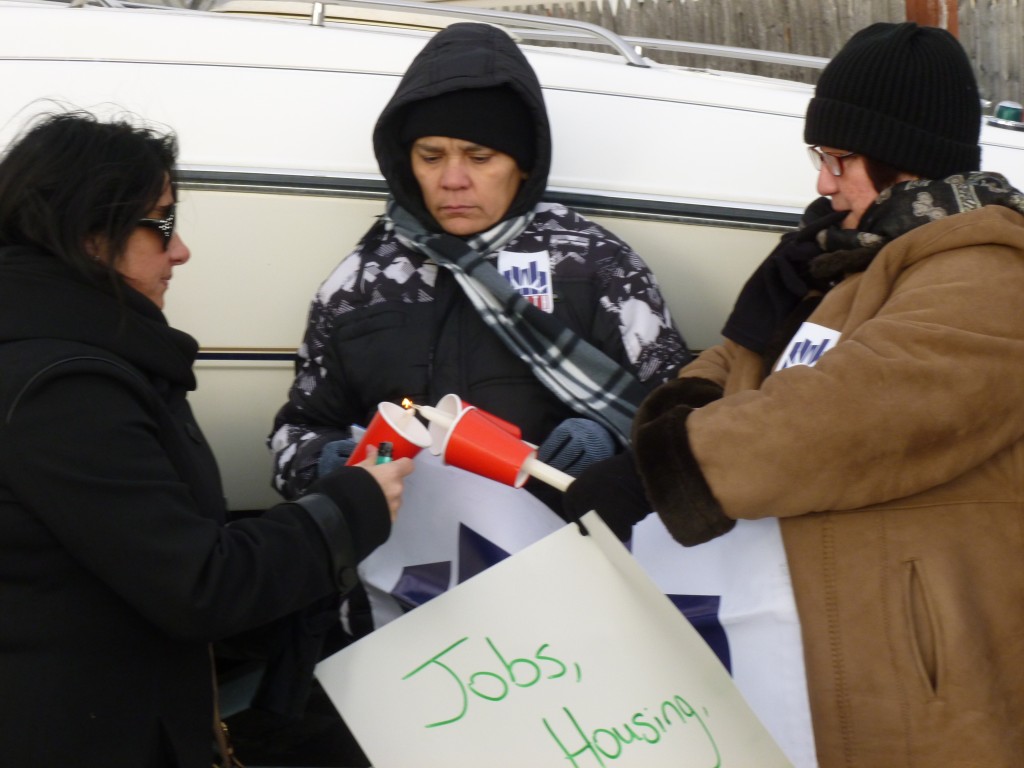 South Queens residents and interfaith leaders held a vigil last week to remind the city that the fight to rebuild after Sandy is far from over. Phil Corso/The Forum Newsgroup

Jean E. Ferrara-Rodriguez’s home in West Hamilton Beach is, like so many others throughout South Queens and Rockaway, still being rebuilt after Superstorm Sandy devastated the area more than one year ago.

The unemployed single mother of a 14-year-old joined more than a dozen friends and neighbors, as well as faith and community leaders, last Wednesday to remind New York City and incoming Mayor-elect Bill de Blasio that the fight against Sandy has not yet been won.

Since the storm, Ferrara-Rodriguez has been living on the second floor of her house with no kitchen, no heat, extreme mold damage, deteriorating repairs and increasing insurance costs. The sign she held during the evening candlelit prayer vigil outside her home translated her frustrations into one sentence: “14 months later.”

“We are struggling day after day just to get along,” she said. “Where are the funds we were promised?”

The money she was asking for stemmed from the city’s $638 million Build it Back program, which she applied for along with 20,000 others but has yet to receive a response. She also said she was keeping an eye on another $1.4 billion in federal funding the incoming de Blasio administration will acquire this spring.

Before the storm in late October of last year, Ferrara-Rodriguez said she left the 164th Road home and sought shelter at a Comfort Inn on Cross Bay Boulevard, where she remained for more than three months. She returned to the damaged home in February of this year and has since been fighting to keep the residence somewhat functional despite setbacks, including failed repairs from the city’s Rapid Repairs program.

The city-based Faith in New York interfaith federation planned the evening prayer vigil outside the West Hamilton Beach home with help from the Alliance for a Just Rebuilding coalition to shed light on just one of many similar families still struggling since the storm. There, strong voices from the city’s faith community called out the incoming mayor with hopes it will sway him and his administration to keep Sandy a relief a top priority.

“While city leaders take a victory lap, families we minister to in neighborhoods like Howard Beach, Hamilton Beach and Far Rockaway are still waiting and suffering unnecessarily,” said Msgr. Al Lo Pinto, Vicar for Human Services in the Diocese of Brooklyn, Catholic Charities and pastor of St. Helen’s Church of Howard Beach. “Mayor-elect de Blasio must make New York City a model for how to leverage billions in disaster recovery funds to create long-term resiliency for Sandy survivors and other vulnerable New Yorkers, emphasizing repairs, good jobs and affordable housing.”

Throughout his campaign for mayor, de Blasio has been vocal about his commitment to ensuring Sandy victims their deserved assistance in bouncing back from the storm. The incoming mayor was also an active critic of his predecessor, Mayor Michael Bloomberg, in how he oversaw the city’s efforts in doling out funding to storm victims.

On his campaign website, de Blasio outlined a series of goals – both short-term and long-term – seeing out ways to both recover as well as make the city more resilient to such storms in the future.

Msgr. Al LoPinto, the pastor of St. Helen’s Church in Howard Beach, issued a message to the city: Residents are still hurting more than one year after Sandy devastated the area.