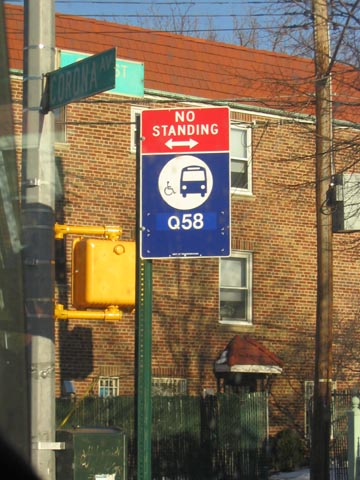 The Q58, which runs between Ridgewood and Flushing, was named the slowest bus route in the borough in a recent report. File Photo

Have any Q58 riders had a hard time getting to work lately? Or wherever they need to go?

Chances are, according to a report released last week, they have.

The bus that runs from Ridgewood to Flushing was named the slowest bus in Queens by the New York Public Interest Research Group Straphangers Campaign and Transportation Alternatives last week.

Still, while the Q58 is no racehorse, it can take heart: It wasn’t the absolute slowest bus in the city – that title is not-so-proudly shared by the M42 and M50 routes in Manhattan.

NYPIRG and Transportation Alternatives doled out its 12th annual “Pokey” awards for the slowest local bus route in the city last week, and officials from the two groups that advocate for better public transportation called the title an “uncoveted” award that is a “golden snail on a pedestal.”

The award is based on the speed of rides taken by Straphangers staff and volunteers on 34 routes across the five boroughs. The 34 lines were chosen because they had high ridership or were historically slow crosstown routes.

NYPIRG and Transportation Alternatives noted that an average wooden row boat can travel at 3.5 miles per hour or more in still water without wind, compared to the average 3.4 miles per hours speed for the two Manhattan buses.

Paul Steely White, executive director of Transportation Alternatives, said that, “help is on the way.”

“Mayor-elect Bill de Blasio has pledged to build a rapid network of buses with the goal of greatly improving transit in the boroughs outside Manhattan’s Central Business District.”