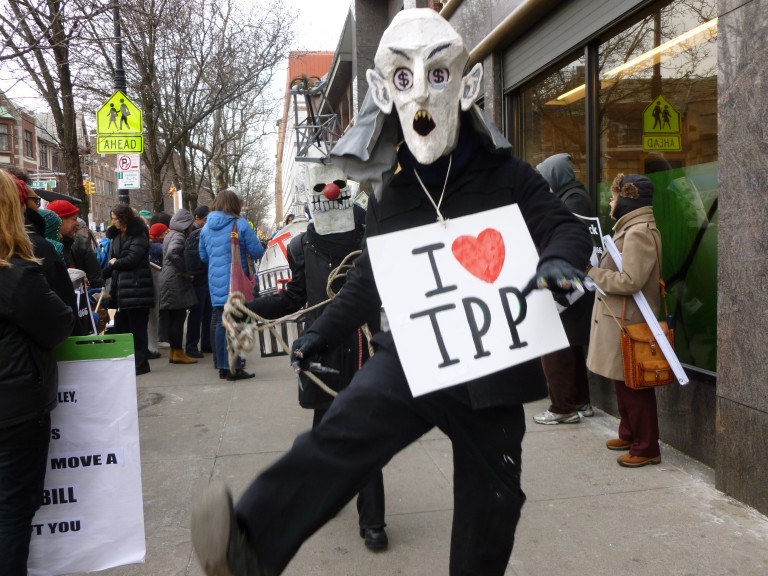 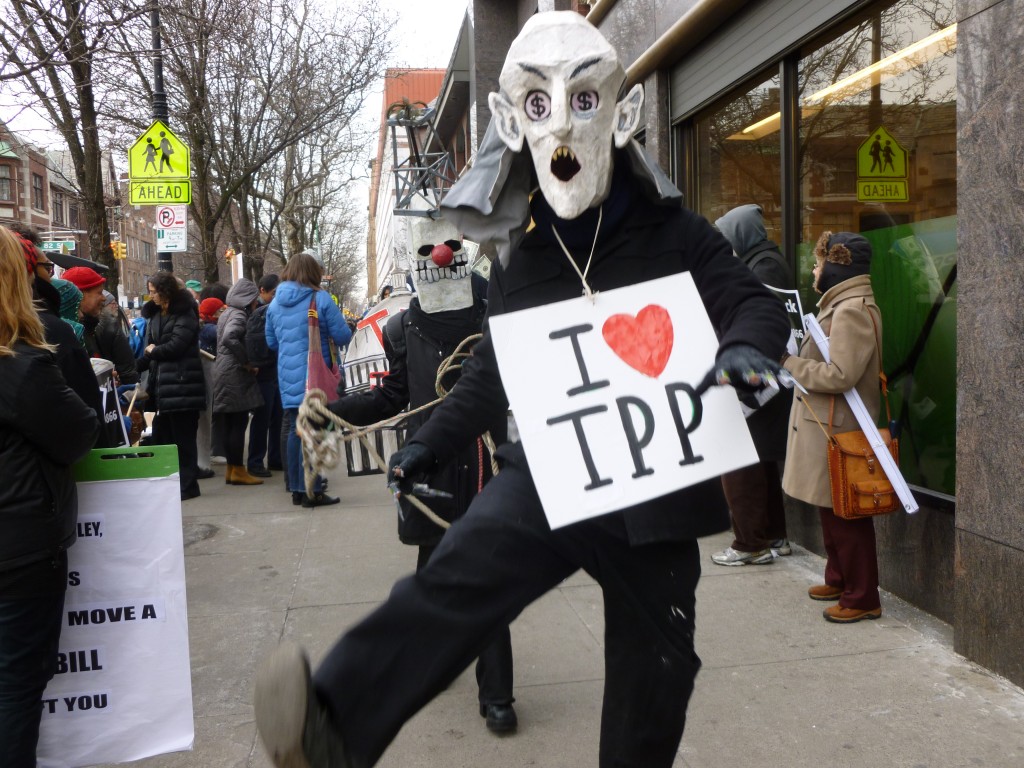 Protesters gathered at U.S. Rep. Joe Crowley’s office in hopes he would vote against a deal, known as the Trans-Pacific Partnership, that would lock the U.S. into what some are calling an undesirable agreement with a number of countries: Australia, Brunei, Chile, Canada, Japan, Malaysia, Mexico, New Zealand, Peru, Singapore, and Vietnam. Photo by Phil Corso

A western Queens rally put one federal lawmaker under the microscope with hopes that he would continue to vote against a controversial trade deal being negotiated in Congress.

“The Trans Pacific Partnership could spell disaster for communities large and small that are seeking to protect themselves from all sorts of public health and environmental dangers – dangers like fracking, for example,” Corinne Rosen, a senior organizer with Food and Water Watch, a consumer protection group, said in reference to the trade deal that is supported by President Obama. “These monstrous trade deals, negotiated secretly in the halls of Washington, are boons for multinational corporations that seek to profit at the expense of American jobs and American health and safety standards.”

The Trans Pacific Partnership is a trade deal between several countries, including the United States and Australia, Brunei Darussalam, Chile, Canada, Japan, Malaysia, Mexico, New Zealand, Peru, Singapore, and Vietnam. Once achieved, it could bring in an estimated $223 billion in global income benefits per year by 2025 with real income benefits to the United States estimated at $77 billion per year, the Office of the United States Trade Representative said. The deal could also generate an estimated $305 billion in additional world exports per year, by 2025, including an additional $123.5 billion in U.S. exports, the USTR said.

Crowley’s spokesman said the congressman kept constituent concerns at the forefront of his political agenda and based his votes on trade agreements on their individual merits and impact on jobs, national security, families and communities.

“He has opposed a number of trade deals like Most Favored Nations status for China, the Central American Free Trade Agreement (CAFTA) and the North American Free Trade Agreement (NAFTA),” a Crowley spokesman said in a statement. “With respect to the Trade Promotion Authority legislation that President Obama requested in the State of the Union address, this has not yet come before the House for a vote but Congressman Crowley did vote against the measure the last time it came before Congress.”

Similar rallies have been held worldwide over recent years, but Brooklyn native Billy Engel of IBEW Local Union No. 3 said he had Crowley in his cross-hairs with hopes of swaying his opinion of the deal. 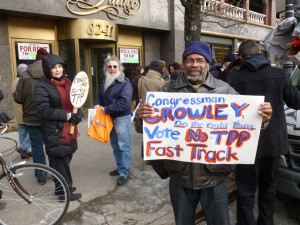 “This is a very serious situation that could ultimately undermine labor,” he said. “The TPP is a job killer and will hurt this country.”

Critics of the deal have said American jobs would be lost because the TPP would result in reduced tariffs that protect domestic factories.

Flenoy Withers III made the trek from the south Bronx and said it was important to have the people’s presence felt in the political tug-of-war.

“It’s important because it has us all being a global family,” he said. “We have to fight for what we believe in because they are definitely going to be fighting for what they believe in.”