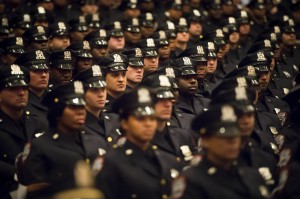 A new court-appointed monitor will watch over the NYPD, Mayor de Blasio said while announcing that he was dropping a stop-and-frisk appeal filed by his predecessor. Photo courtesy Rob Bennett/NYC Mayor’s Office

The mayor made good on one of the key issues that helped get him elected when he announced an agreement in the Floyd vs. City of New York case, dropping an appeal filed by predecessor Mayor Michael Bloomberg and making way for a new court-appointed monitor to watch over the NYPD. De Blasio announced the landmark decision alongside some of the city’s biggest players, who all opposed the policy that critics have charged has unfairly targeted minorities in the city.

“This is a defining moment in our history. It’s a defining moment for millions of our families, especially those with young men of color,” de Blasio said. “And it will lay the foundation for not only keeping us the safest big city in America, but making us safer still. This will be one city, where everyone’s rights are respected, and where police and community stand together to confront violence.”

Bloomberg was a staunch advocate of the stop-and-frisk program, as was Ray Kelly, the former police commissioner. The two oversaw a period that recorded historically high stops, which sparked a heated public debate in the final months of the mayor’s time in office.

Thanks to de Blasio’s agreement with the Center for Constitutional Rights, a court-appointed monitor will serve for three years, overseeing the Police Department’s reform of the policy and report to a federal court on the city’s progress. The decision received support from several of the city’s newest elected officials, including Queens Borough President Melinda Katz.

“I am proud to stand with the mayor today for this announcement,” Katz said. “I believe it’s the right path for the city to take at this time. It is critical that we restore trust and faith in every community in this city and begin to repair relationships. With effective community policing, New York can remain the safest big city in this country, while serving all of its residents with respect.”

A big chunk of Police Commissioner Bill Bratton’s appointment to succeed Kelly in the spot rested in his opposition of the controversial stop-and-frisk policy. Bratton celebrated the major policy shift under the new mayor while still contesting the city would be kept safe under his watch.

“We will not break the law to enforce the law. That’s my solemn promise to every New Yorker, regardless of where they were born, where they live, or what they look like,” Bratton said. “Those values aren’t at odds with keeping New Yorkers safe — they are essential to long-term public safety. We are committed to fulfilling our obligations under this agreement as we protect and serve this great city.”

Patrolmen’s Benevolent Association President Patrick Lynch said the city’s top police unions would still have a chance to respond to the city’s motion to drop the appeal by Feb. 7.

“We continue to have serious concerns about how these remedies will impact our members and the ability to do their jobs,” he said in a statement. “Our goal is to continue to be involved in the process in order to give voice to our members and to make every effort to ensure that their rights are protected.”