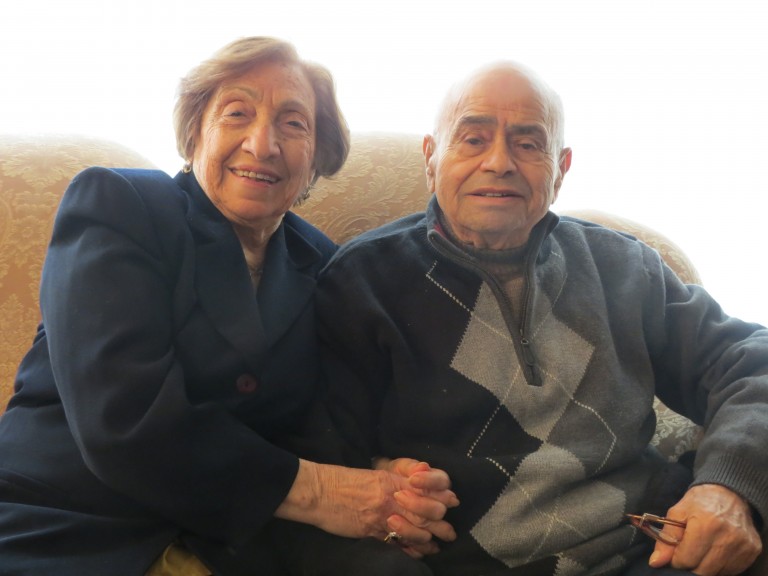 Antonio and Filomena Fossari met when they were growing up in Calabria, Italy. On March 10, the Howard Beach couple will celebrate their 60th wedding anniversary. Photo by Anna Gustafson

Situated in their Howard Beach living room this week, Antonio and Filomena Fossari smiled at one another when asked if they remember when they met each other.

Yes, of course, they said – it was decades ago in Calabria, Italy – but the memory is still vivid, with Filomena, 86, explaining that she first saw Antonio, 88, because he was best friends with her brother growing up.

“He was very handsome,” she said as one of her three daughters, Rosemary, produces a black and white photo of her father, his dark eyes fixated on a landscape outside the photo.

After knowing one another, as well as each other’s families, growing up, Antonio and Filomena realized they wanted to spend their lives together and got married on March 10, 1954 in the ancient Italian town of Pompeii – but the two only got to spend a couple days together as newlyweds before Antonio left on a boat, named The Constitution, bound for the United States.

Arriving in New York on March 26, 1954, Antonio temporarily stayed in West Virginia before moving to Ozone Park, where he launched a career in construction.

“I was a construction man all my life,” Antonio said. “I worked on the World Trade Center, the Verrazano Bridge, the 59th Street Bridge – I worked all over.”

It was difficult, Antonio noted, living and working in a new country without his wife – but Filomena crossed the ocean to join her husband two years after he left Italy, and the two raised three daughters together – their twins, Rosemary and Angela, and Annemarie – and built a life in Ozone Park and Howard Beach filled with much laughter, much food, and much happiness.

Rosemary too said she remembers a childhood filled with love.

“It was very happy, very joyful,” she said of growing up. “The house was always filled with people.”

Describing their parents as exceptionally hard working, their daughters said they will forever be grateful to their mother and father, who dedicated their lives to giving their children a better way of life.

“They taught us to be very hard workers – they came here and left everyone and they were all about loving us and making sure we went to college,” Annemarie said.

As they celebrate their 60th wedding anniversary, which they will spend with their daughters and grandchildren – Robert, 21; Sofia, 13; and Anthony, 7 – the two reflected upon their life together and stressed that respect was one of the most important elements of making a marriage work for so many decades.

“She was always his equal,” Rosemary said of her mother. “They have a respect for each other, even though they’re total opposites.”

“You have to have a lot of patience,” Filomena said. “You try your best.”