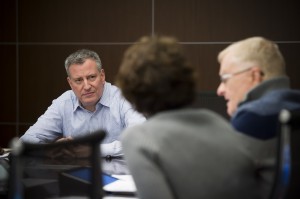 Three months after taking office, Mayor Bill de Blasio has not received a stellar report card from his Queens constituents, the majority of whom are not overwhelmingly pleased with the job he has been doing, according to a poll released last week.

The Wall Street Journal/NBC 4 New York/Marist poll, released March 7, reported that just 36 percent of voters in Queens say the mayor has so far done an excellent or good job – and only 39 percent say the same citywide. In Queens, 40 percent of voters described his performance as fair, and 22 percent say it is poor.

Manhattan residents seem to have the dimmest view of the mayor, with three in 10 voters reporting they approve of how he’s faring. Thirty-six percent in Manhattan say he’s doing a fair job, and 26 percent think his performance falls short.

De Blasio is performing the best in the Bronx, where 44 percent of voters say the mayor has done an excellent or good job, and in Brooklyn the mayor landed a 43 percent approval rating.

Compared to Bloomberg, de Blasio is not faring as well as his predecessor, whose approval ratings hovered around 50 percent at this time in his mayoral tenure.

Despite these numbers, voters seem to have a more favorable opinion of de Blasio as a person, with nearly six in 10 voters saying so. About one in three has an unfavorable one, and 8 percent said they’ve either never heard of him or are unsure how to rate him.

“Many voters like the qualities that de Blasio has as mayor, and they are comfortable with him,” said Dr. Lee Miringoff, director of the Marist College Institute for Public Opinion. “But, race matters, and he still has some convincing to do when it comes to carrying out his responsibilities at City Hall.”