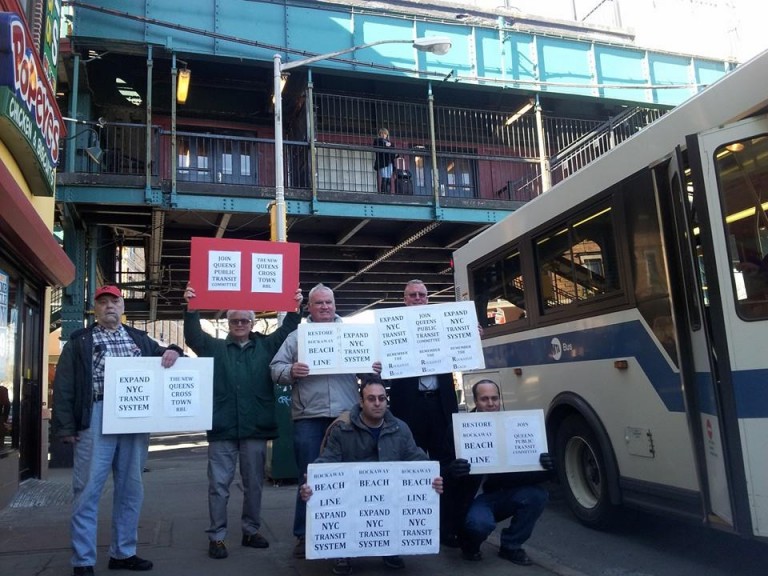 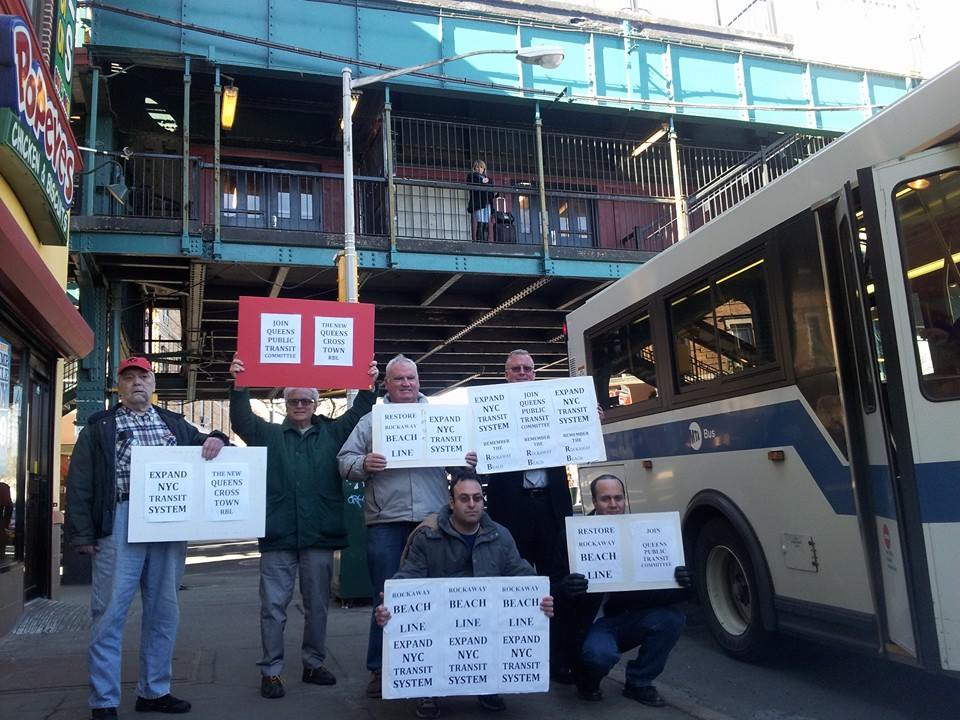 Queens residents drained by long commutes and crowded buses took to the streets Sunday and rallied in support of reactivating the old railroad line that once ran from Rockaway to Rego Park, saying it would give a much-needed economic boost to a peninsula still struggling after Sandy – as well as an entire borough that could be better traversed by its denizens.

“Our goal is to get the message out everywhere,” said Phil McManus, a Rockaway Park resident who founded the Queens Public Transit Committee and helped to organize Sunday’s rallies at four intersections throughout the borough. “We’re trying to let people know that the new Rockaway Beach Rail Line – the new Queens Cross Town – is here. We have overcrowded buses and trains, our roadways are clogged – there are so many things going on. We’re going to have a bigger population. We need the rail line.”

The Long Island Rail Road once operated the Rockaway Beach Rail Line – also known as the White Pot Junction Line – but it stopped running in the 1960s. The LIRR sold the line to the city in 1962, but nothing has been done with it, and litter, chipped paint and general disrepair have replaced the space where trains once ran.

Over the past year, a number of ideas have surfaced as to the area’s future, including reactivating the line and creating a High Line-like park, called the QueensWay. Other residents, including a number from parts of Woodhaven whose homes border the old rail line, have stressed they do not wish to see either plan emerge in their backyards.

“They were drive-by rallies,” McManus laughed. “They were about getting visibility.”

With last weekend’s gatherings being deemed a success, McManus and other rail line advocates said they plan to urge support from Mayor de Blasio and other city leaders. Some elected officials have already backed reactivating the line, including Assemblyman Phil Goldfeder (D-Rockaway Park) and U.S. Rep. Hakeem Jeffries (D-Queens, Brooklyn) – both of whom have lamented the limited mass transportation options Rockaway and South Queens residents have available to them.

Rockaway residents, McManus noted, often have a two-hour community one way into Manhattan and back and frequently run into buses too crowded to let them board. A rail like could potentially cut that commute by more than half.

In addition to allowing Rockaway residents to more easily access Manhattan, it could more easily bring those living outside the peninsula to the area that has faced choppy economic waters following Superstorm Sandy’s devastation.

Still, those who support the QueensWay have said such a park would also bring numerous tourists to the area, providing what they said could be an economic boon. Additionally, those backing the QueensWay have said that the transformation of 3.5 miles of the rail line would provide an easily accessible bikeway on which individuals could commute to work.

While McManus is leading the charge for the rail line, he did say he would support an option that would allow both a park and a train.

“I love parks, and if there’s a way we can share the train and the park, I’m OK with that,” he said. “We want to unite our communities, and we have to seriously consider expanding the system in Queens. If we don’t, we’ll rue the day.”

A representative from QueensWay, Travis Terry, said while he understands why the idea of having both the QueensWay and the rail line “seems like a simple compromise,” it is an “unfeasible” proposal.

“QueensWay’s not wide enough to accommodate both,” he said. “The QueensWay is supposed to be a kids friendly, family friendly project, and you can’t have kids playing on train tracks, so I don’t see how that works,” he continued.

Additionally, Terry cited concerns that reactivating the rail line would be too cost prohibitive to become reality.