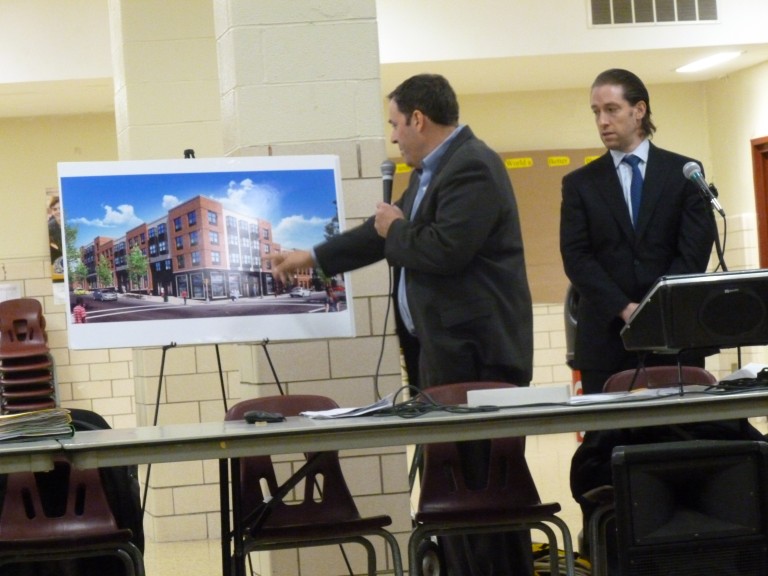 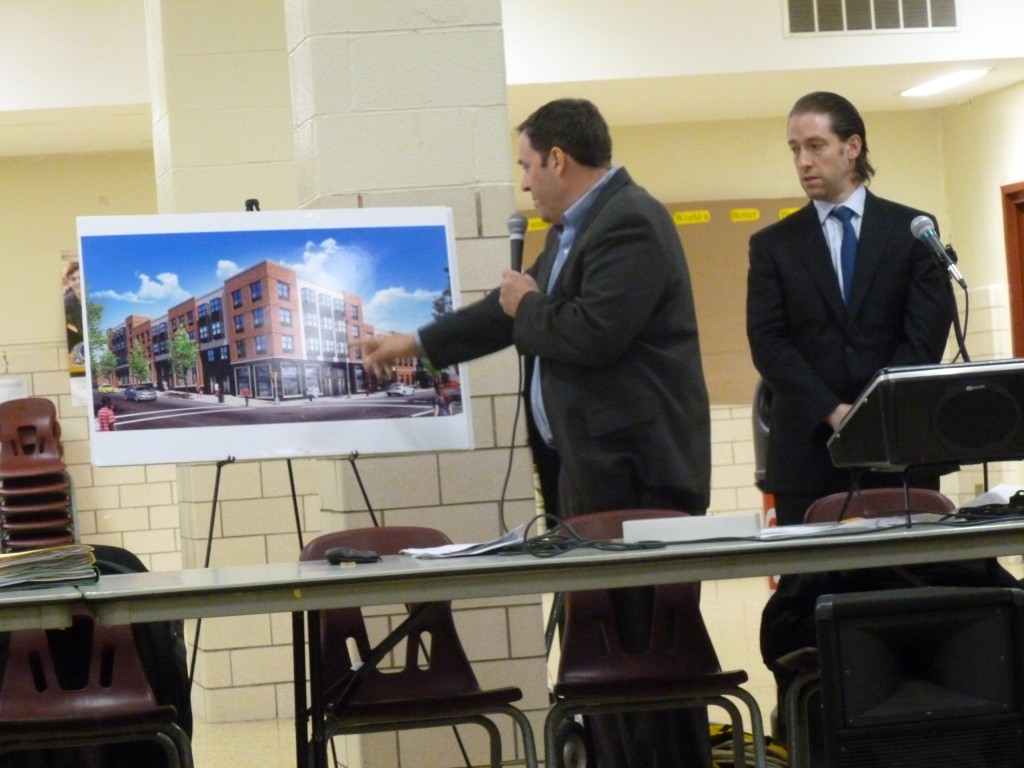 Tom Loftus, of Aufgang Architects, speaks about his group’s proposal to create an upscale apartment building in Ridgewood. Photo by Phil Corso

Plans to create an upscale apartment building in the heart of Ridgewood put some residents at odds with one another at a rowdy rezoning public hearing.

There was a clear divide among those who spoke at last week’s Community Board 5 meeting. While some Ridgewood residents said the 176 Woodward Ave. apartment proposal would help uplift a community eyesore, others sounded off against a complex they felt would only cater to the more financially comfortable.

Aufgang Architects designed the proposal for the $18 million facility that includes a 90,000-square-foot structure to house 88 residential units, commercial retail space, and 118 underground parking spots. Developers said rental prices there were estimated to range anywhere from $1,100 to $1,200 for a studio; $1,400 to $1,600 for a one-bedroom apartment; and $1,700-$1,800 for a two-bedroom apartment.

Tom Loftus of Aufgang Architects said one of the group’s main goals was to focus on the existing urban fabric of the neighborhood and minimize energy consumption. Part of the project included a proposed green roof and dog walk so residents could interact with the upper space of the building.

The group requested a zoning change from manufacturing to residential in order to move forward, and the community board agreed to consider testimony before returning with a final nine-member Land Use Committee report in early April.

Ridgewood resident Daniel Russo was one of the first to speak in favor of the plan at last Wednesday’s public hearing. His brief testimony received a limited run of applause.

“I think it would be great on that corner,” he said. “If this was a lit-up area, that would help the neighborhood very much.”

Joe Pergolese also spoke in favor of the plan on the grounds of beautifying the existing property being used as a contractor’s lot, which he described as unpleasant. He said Ridgewood area has changed over the years and was in desperate need of accommodations for new people looking to move into the neighborhood.

“I’ve been waiting for 19 years for this development to happen,” he said. “I welcome it and I support the zoning law. It’s going to give a good impact in the community.”

But lifelong Ridgewood resident Manuel Jalonschi said he was deeply concerned with how an expensive living option in the middle of his hometown would impact the residents there. He said an upscale building in the middle of Ridgewood might make the less wealthy in the neighborhood feel unwelcome in their own homes.

Sarah Feldman argued the proposal’s architecture was not in tune with the rest of the neighborhood. She testified alongside her boyfriend, Neil Myers, who said that constructing an upscale apartment building in an area saturated with manufacturing would only upset the surrounding community. And 188 parking spaces, Myers said, might also be overdoing it.

“I would agree that the current zoning is not perfect the way it is. It is an eyesore,” Myers said. “But I think certain residential rezoning would not be beneficial to the neighborhood as a whole. I think potentially a mixed-use building might be more appropriate.”