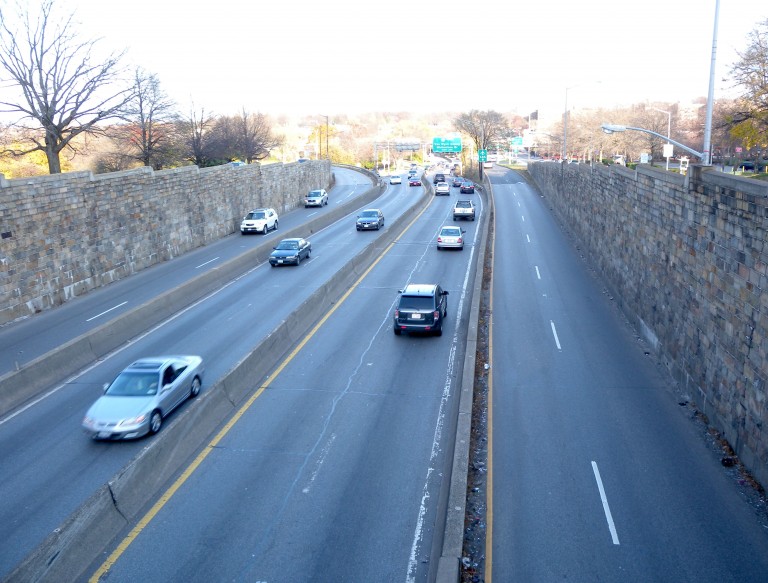 The Jackie Robinson Parkway was recently named one of Queens’ worst highways when it came to low surface ratings. Photo courtesy Wikimedia/Jim Henderson

Following Superstorm Sandy, city officials made improving New York’s infrastructure one of their top priorities for the first time in years – and there is much work to be done, including in Queens, where about 31 percent of the roads were reported to be in sub-standard condition, according to a new report issued by the Center for an Urban Future.

The report, titled “Caution Ahead: Overdue Investments for New York’s Aging Infrastructure,” detailed a litany of problems throughout the five boroughs, including documentation that the Jackie Robinson Parkway, the Shore Front Parkway, and Queens Boulevard were some of the most poorly maintained roads in the borough – and city.

“‘Arguably city streets are in the worst shape of any of our transportation infrastructure – and that says a lot,’” Elliot Sander, former executive director of the Metropolitan Transportation Authority, said in the report.

While each of the boroughs needs widespread work, the report does said it is a positive that city officials are seriously looking to fund major construction and repairs. Such a commitment comes after the scale and severity of Sandy prompted numerous studies to assess the damage and led policymakers to take steps to shore up the city’s coastal infrastructure weaknesses.

“New York’s core infrastructure is in dramatically better shape than it was in the 1980s, when the city closed the Williamsburg Bridge for fear of collapse, track fire were a regular occurrence in the subway system, and the Brooklyn Bridge, FDK Drive and West Side Highway all experienced structural failures,” the report stated. “Yet, as we detail in this report, much of the city’s roads, bridges, subways, water mains, sewer systems, school buildings, and other public buildings are more than 50 years old, and many critical components are past their useful life and highly susceptible to breaks and malfunctions.”

With more than 1,000 miles of city water mains being more than 100 years old and more than 160 bridges having been built over a century ago, it won’t be cheap to remedy the long list of issues – according to Center for an Urban Future, the city will have to invest approximately $47.3 billion to maintain the infrastructure.

“‘In some cases, the infrastructure in New York is so old we don’t even know where it is under the street,’” city planner and historian Alexander Garvin said in the report. “There can be a water main break in lower Manhattan, and our engineers won’t be able to find it.”