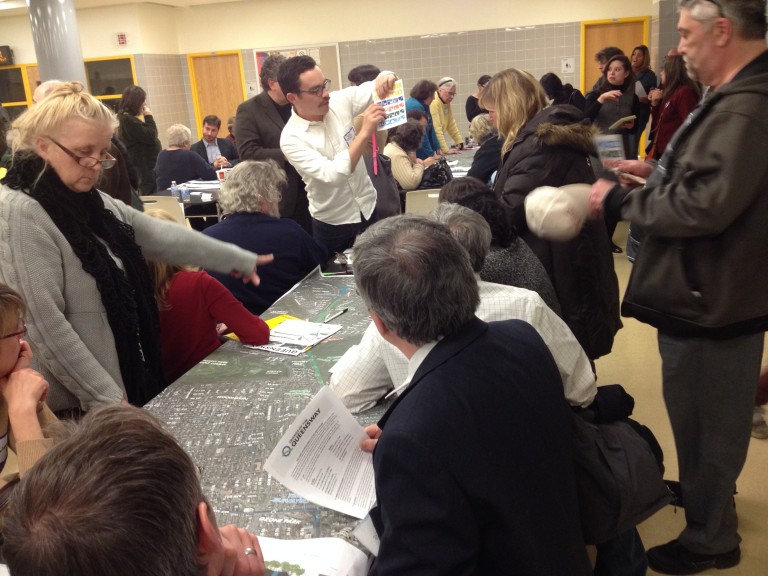 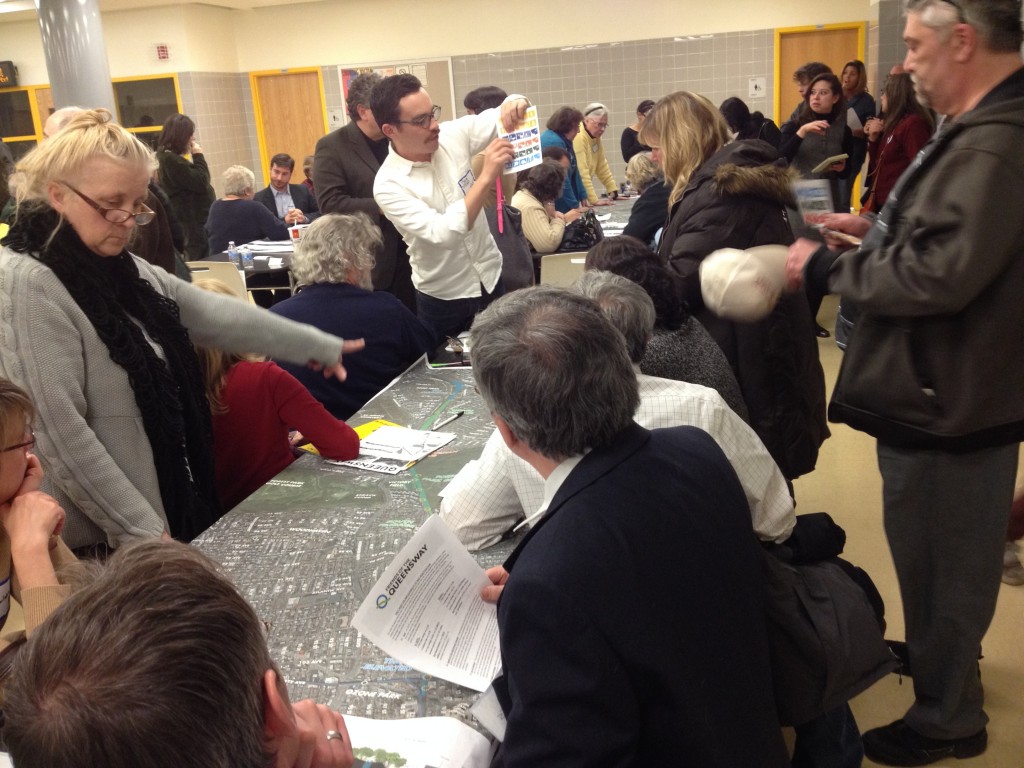 Residents from throughout Queens gathered for a meeting in Forest Hills Monday about the proposed QueensWay. Photo by Phil Corso

It took two rooms to accommodate everyone hoping to land a closer look at the latest design concepts for a potential public park running along an abandoned rail line as the Friends of QueensWay and the Trust for Public Land kicked off their second series of public workshops this week.

Residents from throughout the borough attended Monday evening’s meeting, at which the groups unveiled the preliminary designs in Forest Hills on Monday evening for what could become of the abandoned 3.5-mile stretch of railway that runs through Forest Hills, Rego Park, Glendale, Woodhaven, Richmond Hill, and Ozone Park. It was the first of two workshops, with the second slated for two days later in Richmond Hill.

“All these drawings are options for exploration that we need feedback on,” said Adam Lubinsky from WXY architecture and urban design – one group conducting a study on the space. “There is nothing that is set in stone as an idea here so it is really important we get some feedback.”

Lubinsky delivered a brief presentation before opening the floor up to two rooms worth of residents looking to see exactly what kinds of things were being considered for the project and whether or not they were consistent with public opinion. He said the input gathered at each of the two workshops would be taken into consideration before a final report is delivered in June.

The Friends of the QueensWay and the Trust for Public Land have been working to convert the space into a 47-acre linear park and cultural greenway, but specifics about that plan are still in their earliest phases. The workshops sought out to address some of the earliest community concerns, such as security and public safety.

One of the topics discussed included whether or not bikers and pedestrians should share a common path along the QueensWay, or if separate tracks could be built without disturbing the neighboring homeowners.

Adrian Benepe, who served as Parks commissioner for nearly a decade before signing on as senior vice president and director of city park development at the Trust for Public Land, said the linear park proposal was in tune with Mayor Bill de Blasio’s recent traffic and pedestrian safety plans. He described the latest proposals as a populist project that could address the area’s shortage of open, public space.

“This is the kind of project the new mayor might get behind,” Benepe said. “I would have embraced this project as Parks commissioner.”

Darius Niks, a Forest Hills native who lives closer to the bustling Queens Boulevard, listened in on the presentations and said he could not be more thrilled with the group’s intentions.

“I want somewhere to run,” Niks said. “I am tired of always trying to dodge cars whenever I go outside. It’s a nightmare.”

David Quintana of South Ozone Park said he was skeptical of the public park proposals and would rather see the railway reactivated to improve the borough’s public transportation options.

Unlike in years past, Quintana argued the city budget was not robust enough to support and maintain new parkland.

“When I was a kid, Parks manned every site. Equipment was more readily available,” Quintana said. “Where is the equipment going to come from now? We will just be building a new eyesore as opposed to this existing eyesore.”

The Rockaway Beach Rail Line – which makes up a portion of the QueensWay – stopped running in the 1960s and the Long Island Rail Road sold that space to the city in 1962. It has sat idle ever since, and litter, chipped paint, and general disrepair have replaced the space where the trains once ran.

A number of ideas have been floated for the abandoned line, and other civic leaders and elected officials, including Assemblyman Phil Goldfeder (D-Rockaway Park), hope to see the railway reactivated.

Other residents, including a number from parts of Woodhaven whose homes border the old rail line, have stressed they do not wish to see either plan emerge in their backyards.

Mark Matsil, New York state director for the Trust for Public Land, said his group had a successful track record of turning similar spaces into beautiful public parkland in other parts of the country. This time, he said, the Trust was starting with a clean palate that relied on community input to move forward.

“The train was abandoned 50 years ago, and there is a severe lack of open space in the community,” Matsil said. “There has been a lot of community support for this and it is encouraging to work with all the unique community groups, each with their own unique desires.”