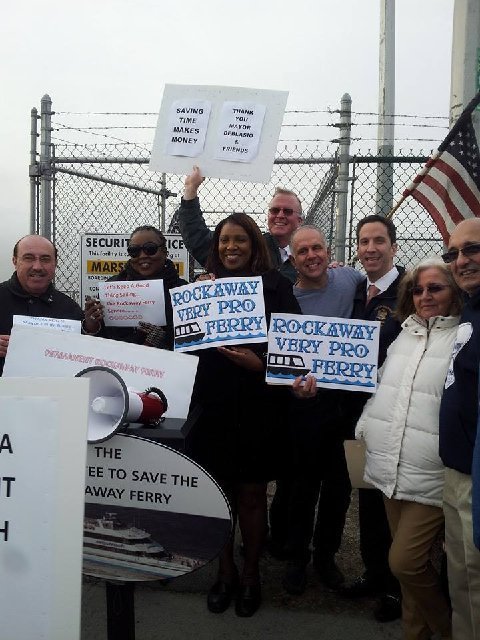 Civic leaders and elected officials gathered in Rockaway last week to voice their appreciation to Mayor Bill de Blasio for extending the ferry – but stressed that the boat service should become a permanent one to allow the peninsula’s residents better access to the rest of the city and tourists an easier way of getting to an area in need of an economic boost.

“We need this ferry,” Danny Ruscillo, a member of the Committee to Save the Rockaway Ferry, said at a press conference held at Beach 108th Street and Beach Channel Drive last Thursday. “Transportation in Rockaway has been very poor. We all know that… I’m hoping, Mr. Mayor, this stays here for good.”

In February, the mayor announced that the Rockaway ferry service would be extended for at least another three months, noting the role of the transportation mode in helping the peninsula recover following Hurricane Sandy.

“We are committed to the Rockaways’ recovery,” de Blasio said at the time. “…We are going to keep our focus on communities hit hard by Sandy to ensure no one is left behind.”

The ferry service, which had been re-launched following Hurricane Sandy and which runs between Rockaway and lower Manhattan, is expected to operate until at least May – but civic leaders and Queens legislators are urging the mayor to make the ferry something on which residents can always rely.

“We want to make sure when folks come to the city, they know they can come out here – shop, spend their money,” Borough President Melinda Katz said at last week’s press conference. “… It’s not going to happen easily without the ferry. In order to have businesses know they can come out here and create jobs, in order to make sure folks can get in and out to spend money, you need ferry – and you need the ferry to be permanent.”

“Today is not the end – today’s the day we’re going to say thank you, and we’re going to hold you to it,” Goldfeder said in reference to making the ferry permanent.

Ulrich stressed that while “we’re here in a way to thank the elected officials” for extending the ferry service, “I think the real debt of gratitude should go to the riders.

“If it wasn’t for the people who take the ferry every day, the ridership that keep the numbers high…we would not be able to be here today,” he said.

When Sandy devastated the Rockaways, leaving it without the A subway, ferry service became a vital piece of the recovery process, Addabbo said.

“Hundreds of thousands of passengers have crossed these waters on the Rockaway ferry since its inception in 2012,” Addabbo said. “That in itself should be reason enough to make this service permanent – the community has very clearly shown it’s a valuable and needed resource.”