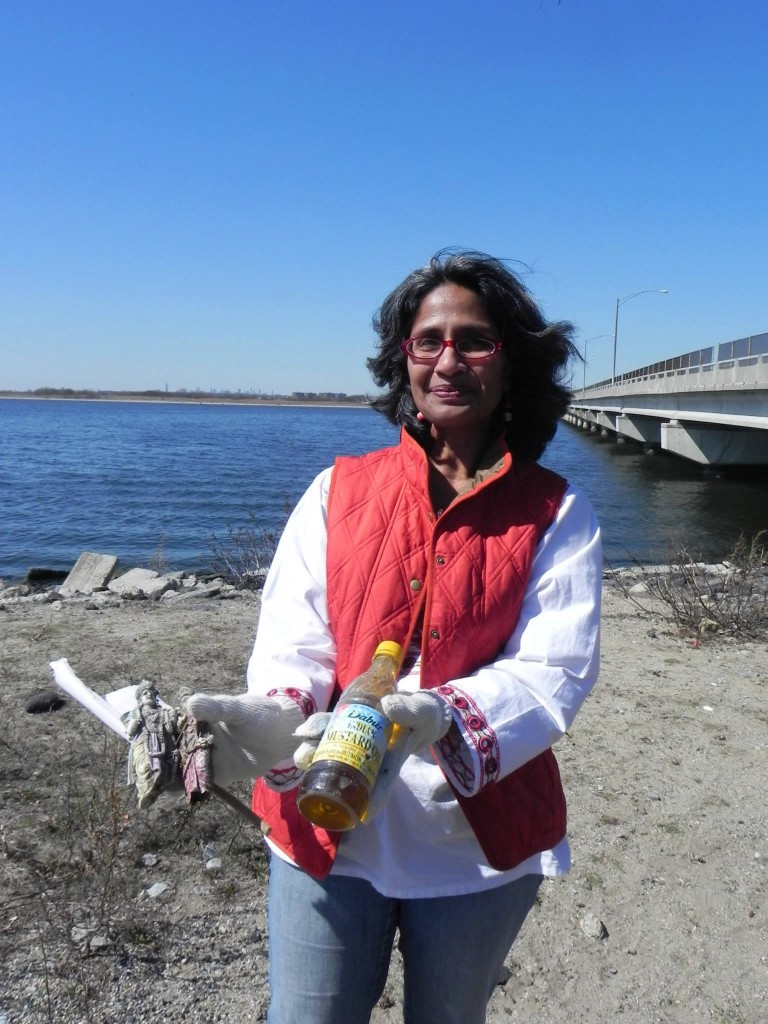 Sunita Viswanath, co-founder of Sadhana, shows some of the items cleaned from the Jamaica Bay coastline Sunday afternoon. During the cleanup, which Sadhana and the Gateway National Recreation Area are sponsoring monthly through November, 10 large bags of items were collected. Photo by Hemma Kilawan

Bundled up in coats protecting them from the still-cold spring, the volunteers – young and old, from Queens and throughout the city – spread out across the beach at Jamaica Bay Sunday afternoon, picking up items scattered across the sand that, to those who left them there as religious offerings, represented beauty and prosperity and renewal. Once lovingly handled by worshipers on the South Queens coastline, colorful statues of such Hindu gods and goddesses as Vishnu, Lakshmi, and Ganesha line the sand in a less perfect form than they once were – their plastic shoulders chipped, their painted facades water-worn.

Spending a couple hours on the shore where many Hindus – especially those from nearby Richmond Hill, Ozone Park, and South Park – go to 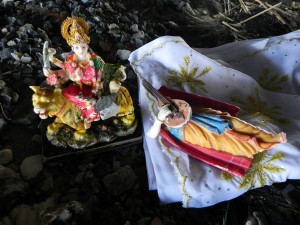 Such items as these statues are often left in Jamaica Bay’s waters – a practice members of Sadhana are trying to change. Members of the group are asking worshipers to be more mindful of the environment and not leave goods that are non-biodegradable in the area. Photo by Hemma Kilawan

pray, the volunteers comb the beach for items that worshipers take to Jamaica Bay because it has become an adoptive Ganges River – India’s waterway that is perceived as sacred and where people will take religious items to be blessed. But, because Jamaica Bay has become such a draw, the coastline has also become increasingly littered with religious items that were put in the water but wash back onto the shore, alarming area park workers and environmentalists who worry what the non-biodegradable goods are doing to an ecosystem home to many species of wildlife.

“We like to put offerings in the water, but, when this practice began in the olden days, those offerings were biodegradable – flowers and fruits; it wasn’t the styrofoam and bottles of today,” said Sunita Viswanath, a co-founder of the all-volunteer group called Sadhana: Coalition of Progressive Hindus.

That is why Viswanath and the group’s two other co-founders, Aminta Kilawan and Rohan Narine, launched, along with the U.S. National Park Service, a monthly cleanup program, which began Sunday, at Jamaica Bay. Known as “Project Prithvi,” the initiative continues the work that others in the Hindu community have done to pick up the religious items from the shoreline. Additionally, as part of Sadhana’s work, the co-founders said they are going to different Hindu temples to speak to religious leaders and worshipers about the importance of respecting the environment – a message they said has been well received because it is so core to the beliefs of Hinduism.

“When we show community members the damaged, broken idols that we have collected at the beach, that really gets a reaction,” Viswanath said. “They stop in their tracks and say, ‘Wow, we shouldn’t be doing that.’” 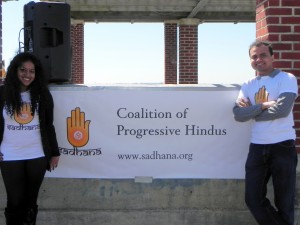 Kilawan, whose parents migrated to Queens from Guyana in the 1980s and who grew up in South Ozone Park and Ozone Park, noted that while it can be daunting to institute such major change in the way people worship – it is possible, especially when those who are worshipping do not feel as though they are being attacked for their religious beliefs.

“It’s definitely difficult,” Kilawan said. “It’s something that’s close to people’s hearts. Change is hard in any way. Throwing a sari in the garbage, or throwing something that a person believes is sacred, into the garbage, they may perceive that as sacrilegious.”

Still, the Sadhana co-founders said, people are receptive to the call for respecting the environment – and Kilawan said they are speaking to people about changing the way they leave the items. So, for example, instead of leaving a sari in the water, Kilawan said people could collect the saris and give them to an organization that will distribute them among the less fortunate.

“The hardest part is trying to maintain tradition while still realizing that putting offerings into the water that aren’t biodegradable is antithetical to what it means to be Hindu,” Kilawan said.

The cleanups will be held the first Saturday of every month from 1 p.m. to 4 p.m. by the Joseph P. Addabbo Memorial Bridge in Jamaica Bay. 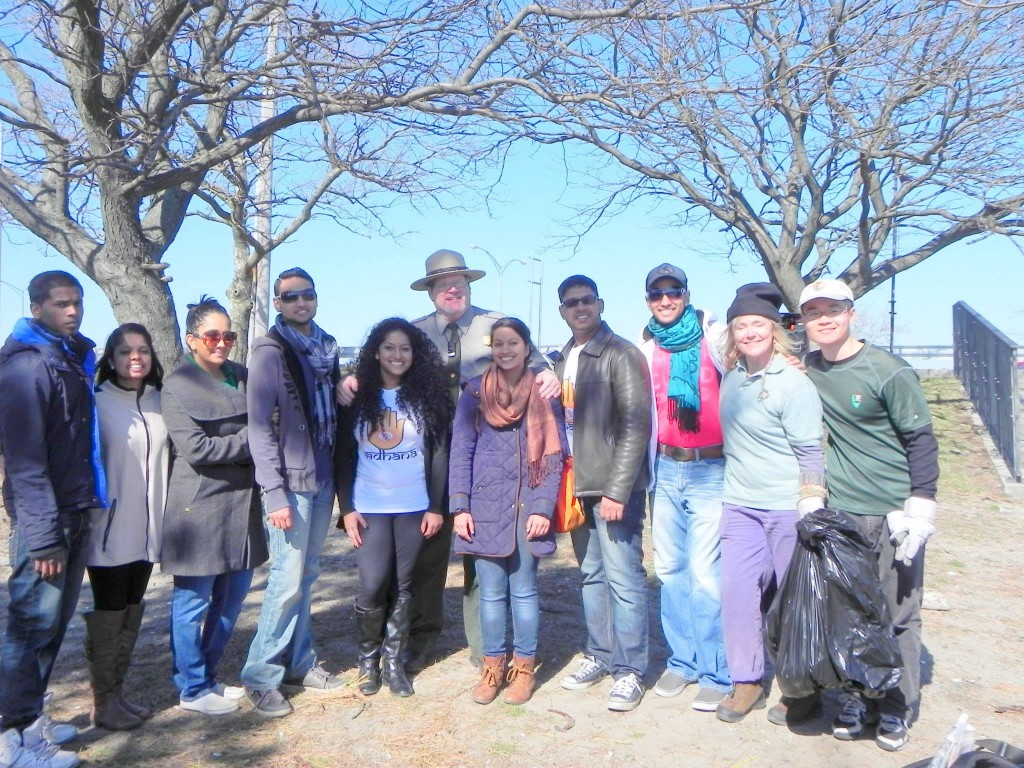 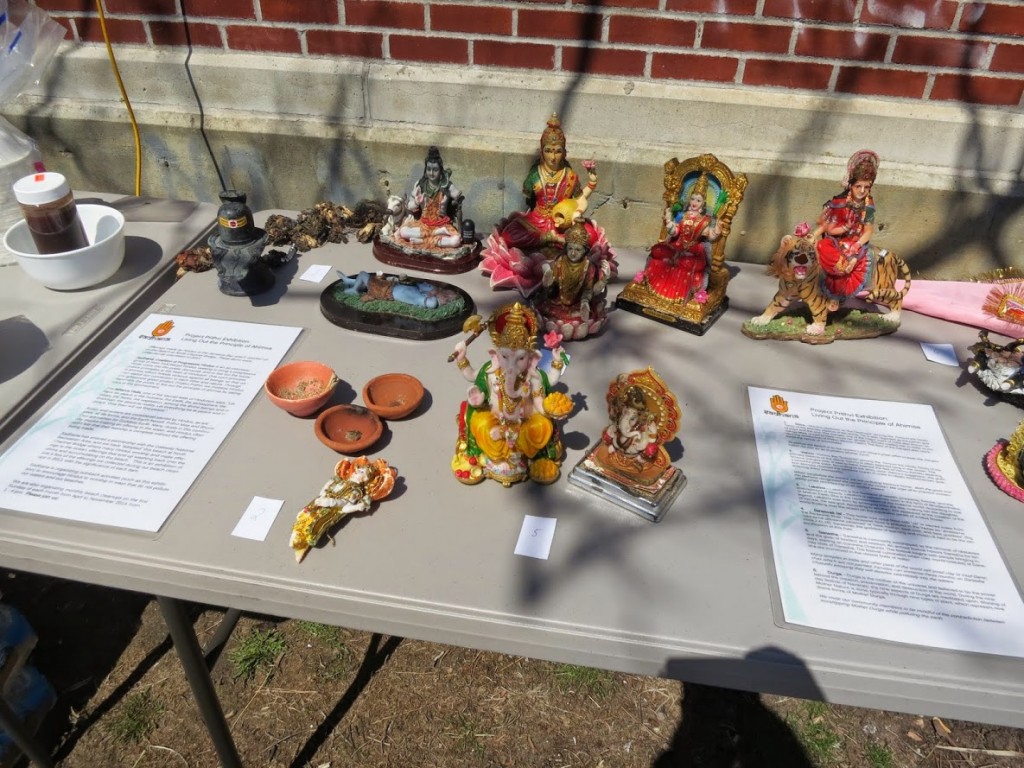 Members of Sadhana, an all-volunteer group of New York-based Hindus seeking to bring a progressive Hindu voice into the public discourse, displayed items that were found on the Jamaica Bay coastline during Sunday’s cleanup. Photo by Sunita Viswanath 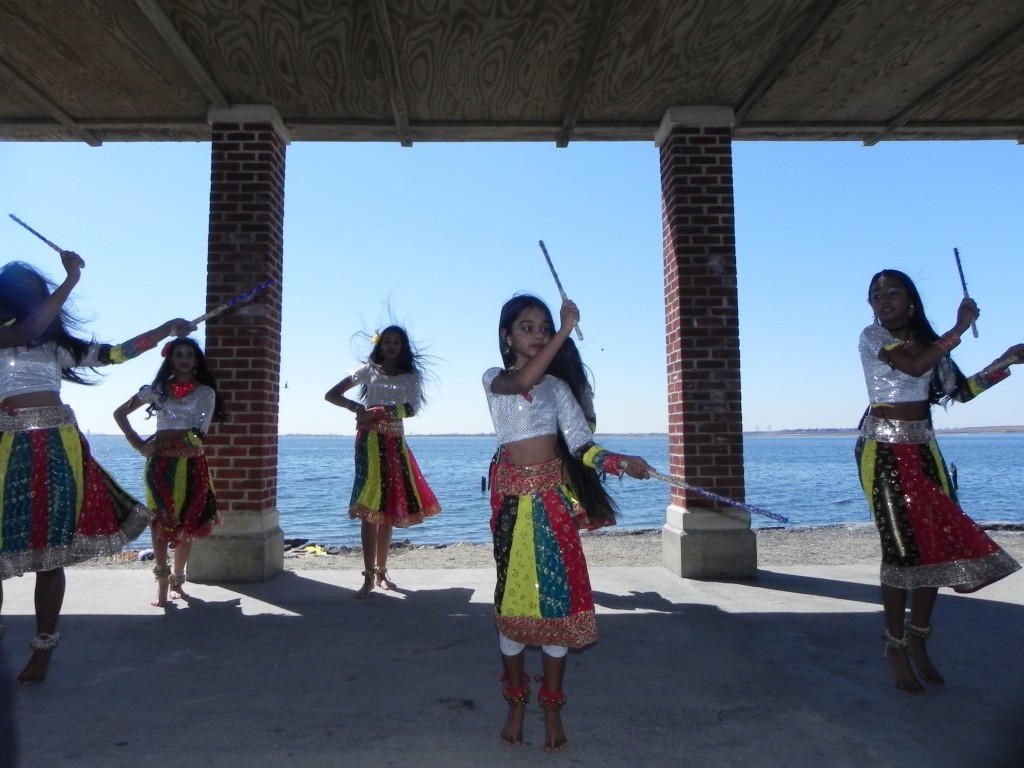 Divya Nach Dancers of the Sanasani Dance Academy performed during the event. Photo by Hemma Kilawan 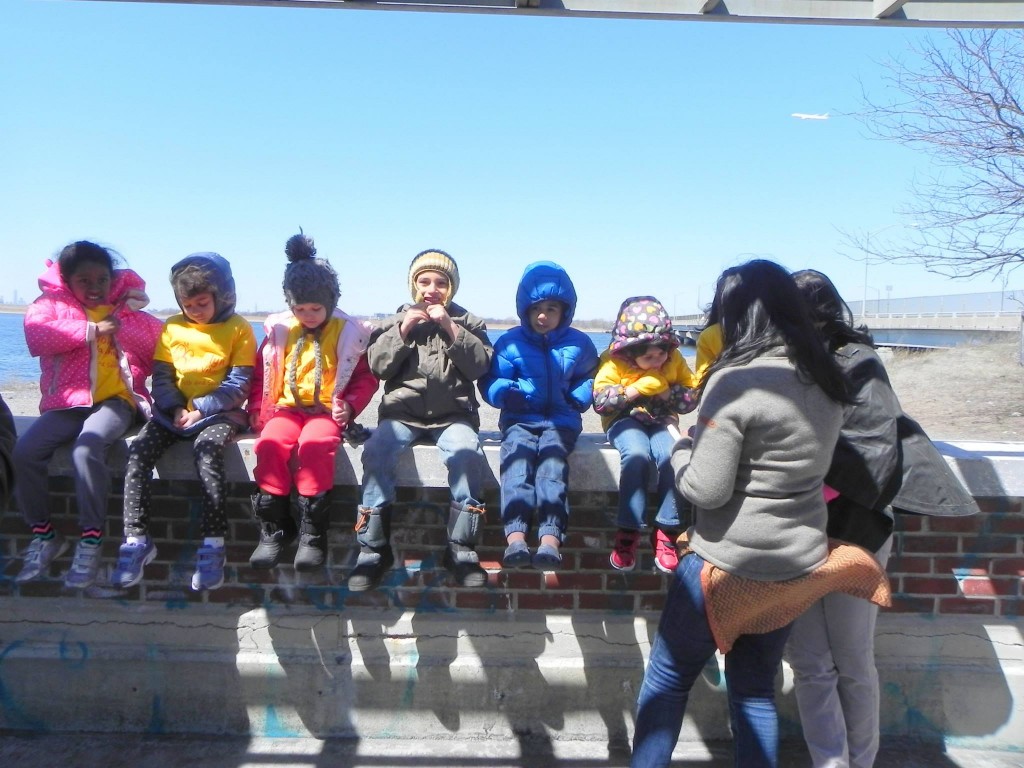 Volunteers of all ages participated in the cleanup. Photo by Hemma Kilawan 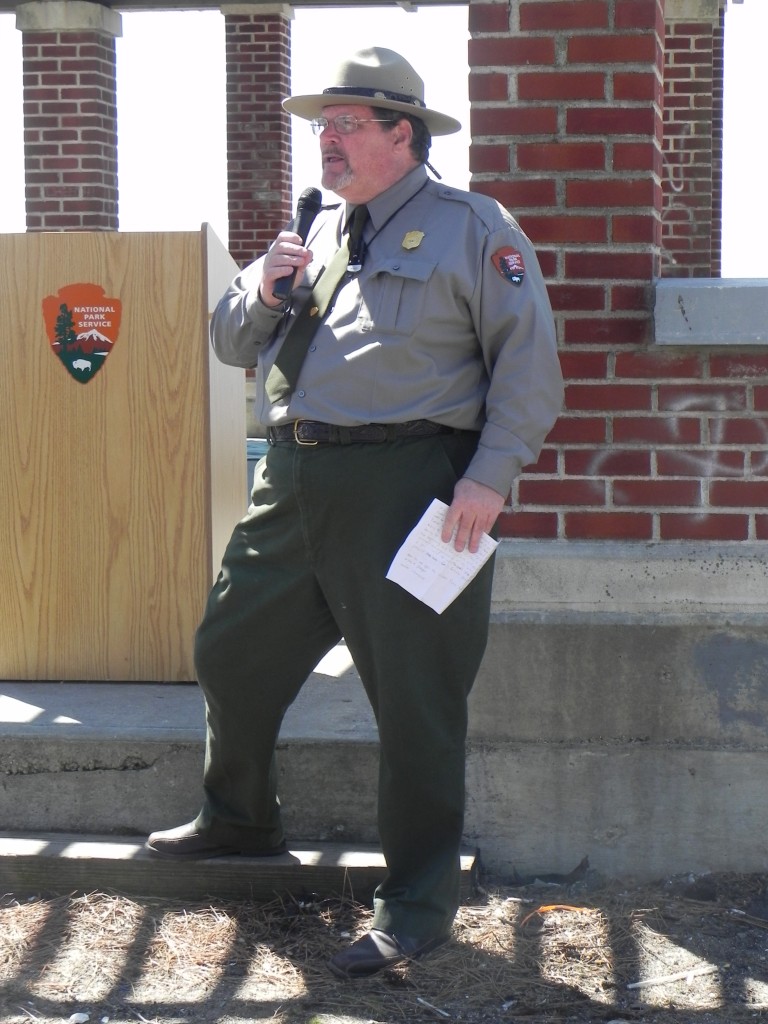 Keith White, of the Gateway National Recreation Area, addresses the crowd about the importance of taking care of Jamaica Bay. Photo by Hemma Kilawan 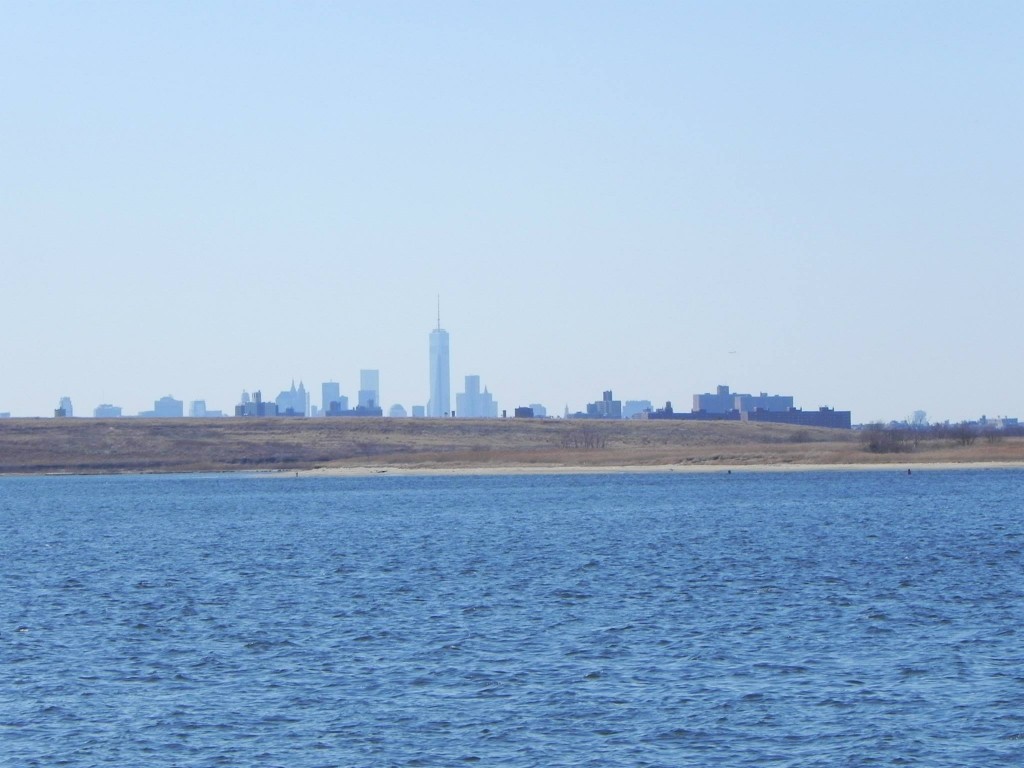 Many Hindus from Richmond Hill, Ozone Park, and South Ozone Park will worship at Jamaica Bay. Photo by Hemma Kilawan