While most people were wrapping up their Easter Sunday feast, 112th Precinct Capt. Thomas Conforti was tweeting up a storm.

“One last egg….the first person to walk into the #112Pct station house and ask the officer ‘Where is the Captain?’ wins,” Conforti, the precinct’s commanding officer, posted to Twitter Sunday afternoon.

Conforti’s central Queens precinct was picked as one of five throughout the entire city to spearhead the NYPD’s Twitter pilot program. Each tweet comes from the captain himself with the ultimate goal of bridging the gap between cops and their community, which includes more than 100,000 residents throughout Forest Hills and Rego Park.

The precinct already collected more than 445 followers since Conforti first started chirping updates from the precinct. His tweets provided an insider perspective on the goings on of the department, firing off photos of a blood drive, community Easter egg hunt and even the captain’s first selfie. 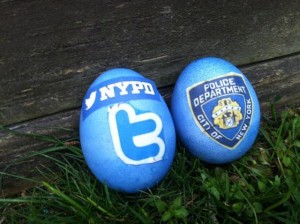 “People are really embracing it,” Conforti said, less than one week after the @NYPD112Pct Twitter was launched. “The goal is to use the technology available to us and reach more people.”

Conforti said his follower numbers have gone up each day since he started tweeting, and some of them came from far beyond the precinct’s boundaries in places like France. His first phase of the Twitter roll-out included plans to publicize some of the precinct’s more under-the-radar projects.

“We want to educate people that we do a lot more than just arrest people and write tickets,” Conforti said. “We do much more than that. We have great programs like graffiti cleanups, auxiliary officers, block watchers and the explorer program.”

Heidi Chain, president of the 112th Precinct Community Council, said the captain’s digital work spurred her into joining the Twitter world herself. One of her group’s ongoing efforts has always been to connect the community with the 112th and she said this latest endeavor makes her job a lot easier.

“This is all positive for everyone involved. The more interaction between the community and the Police Department, the better off we all are,” she said. “Any medium we can use to spread information is good.”

With Chain’s help, Conforti and the 112th Precinct rolled out another outreach program in December when they streamed the first ever online community council meeting. Chain said the precinct has been a consistent pioneer in using new technology to keep the community safe.

106th Precinct Deputy Inspector Jeffrey Schiff was also named one of the five precincts to start tweeting along with precincts in East Harlem and Brooklyn. Police Commissioner Bill Bratton has been an active Twitter user since Mayor Bill de Blasio appointed him to the post earlier this year.

If successful, Bratton said the Twitter project would be implemented throughout the entire department. Conforti, however, said he was not going anywhere.

“It’s here and it’s not going to go away,” Conforti said of the program. “I would imagine we would enhance other sides to social media outreach to make sure people get involved. If they appreciate it, they should spread the word and tell their neighbors.”