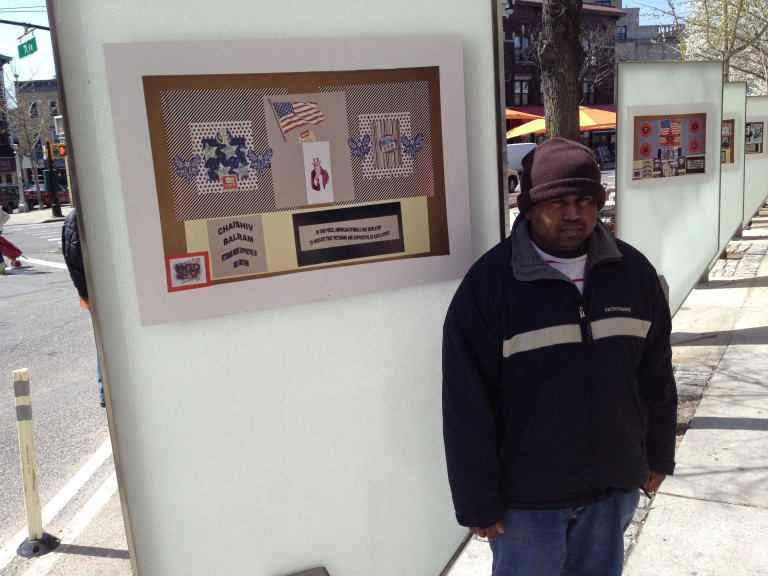 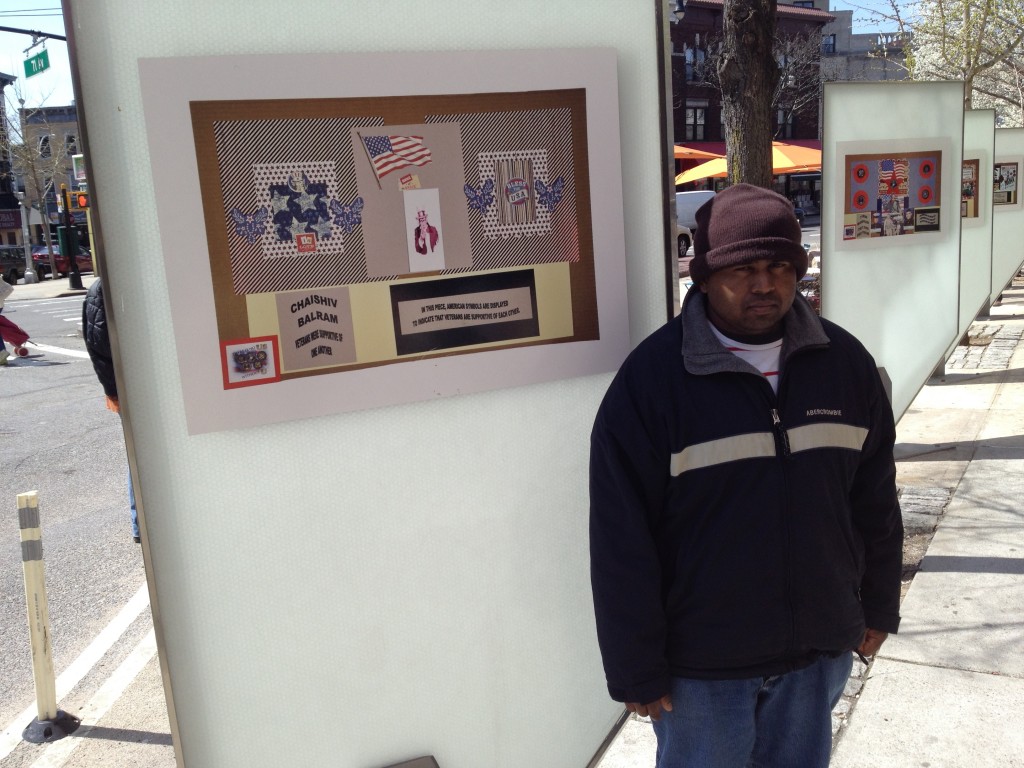 Chaishiv Balram, a veteran who served in Iraq, stands next to his artwork that was recently shown in Ridgewood. Photo by Phil Corso

Any war veteran could tell stories about how soldiers always stick together, but Chaishiv Balram of Queens Village found a way to show it.

Balram, 28, spent six years in the U.S. National Guard and completed one tour in Iraq before returning home. He highlighted a piece of his artwork, which was recently shown in Ridgewood, with the explanation that each American symbol represents how veterans consistently heap support on their brothers, and sisters, in arms.

“I made this piece to represent America and our veterans who fought for this country,” Balram said of his work, which was centered by a picture of Uncle Sam himself. “I wanted to find a way to represent what America is, so I used symbols of America.”

He and other war veterans showcased their own expressive pieces of art along the streets of Ridgewood and were commemorated last Thursday as their installation, “There is No Us without U,” was decommissioned. The program was the brainchild of the city Transportation Department’s art program, along with the Myrtle Avenue Business Improvement District and the VA New York Harbor Healthcare System.

The temporary exhibit had already been featured in a Brooklyn plaza before making its way to Queens over the past 11 months. In total, nine seven-foot-tall outdoor art display cases became home to a color display of veterans’ artwork providing a glimpse into what life is like for those heroes returning home.

Ted Renz, executive director of the Myrtle Avenue BID, said the exhibit was a welcome attraction to the space, which will be declared a permanent plaza by the end of this year. It will be the third plaza underneath the BID’s jurisdiction, he said, and will serve as an anchor for the eastern end of Myrtle Avenue’s business district.

“We believe very strongly in the plaza program and the art program because it does bring economic vitality to a community,” Renz said. “It brings people to the plaza and translates into economic activity. It’s a real partnership we have here.”

The BID buddied with the DOT and the Brooklyn-based Veteran Support Center,  which uses art therapy as a means to aid veterans through self-expression, to help visualize their experiences upon returning home. The various collages on display were a byproduct of several art therapy sessions before landing on the streets of Ridgewood.

DOT Borough Commissioner Dalila Hall said the agency was thrilled to have facilitated a venue for veterans to express themselves on the streets of Queens.

“We’re very pleased to be able to partner with the VA to have the public space in order to highlight the work of the veterans,” Hall said. “The agency is just very gratified that we have had such a wonderful turnout.”

Berly Brenner, creative arts therapist with the VA New York Harbor Healthcare System, said the artwork set out to highlight the relationship America has with its veterans. This was their first exhibition of its kind and Brenner said it has been a huge success, garnering tons of fan mail and heartfelt phone calls from vets who went through the program.

“The veterans worked hard on this project because it gave them an opportunity for visibility and self-expression,” she said. “This wasn’t an easy thing to put together. It was truly a labor of love.”

Balram said he could not agree more.

“This is a great thing because it helps the veterans as well as the businesses,” he said. “It feels good to know we have a voice in this community.”

Veterans, city officials, and civic leaders gathered in Ridgewood last week to decommission an arts installation showcasing the work of veterans. The exhibit was the brainchild of the city Department of Transportation’s art program, the Myrtle Avenue Business Improvement District, and the VA New York Harbor Healthcare System. Photo by Phil Corso