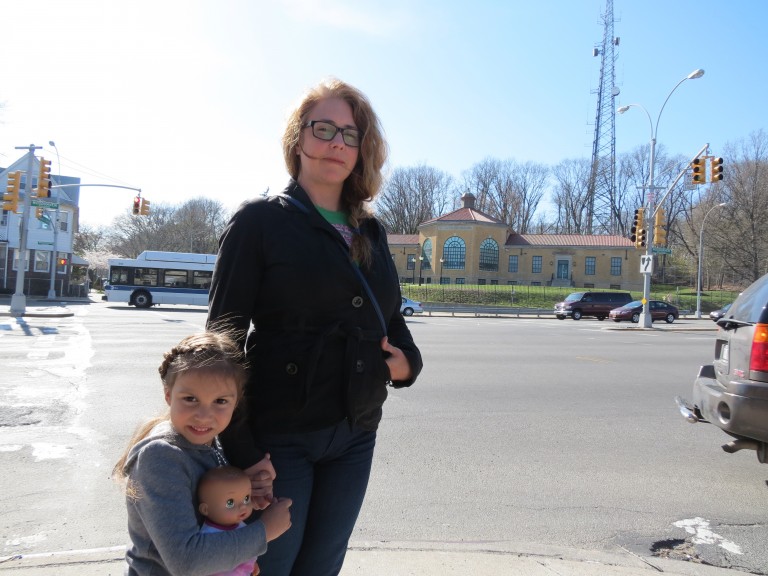 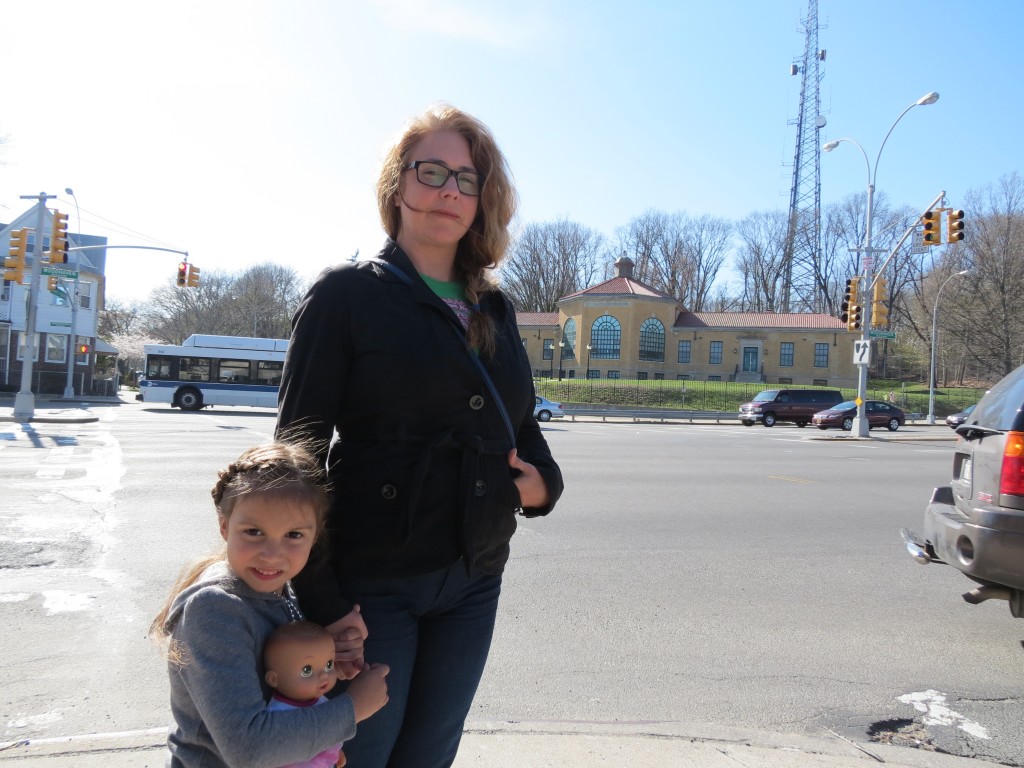 Lisa Meridew, who walks her daughter, Alice, to school almost every day, is urging the city to bring immediate relief to the intersection of Park Lane South and Woodhaven Boulevard, which she said is a disaster waiting to happen. Photo by Anna Gustafson

Calling the intersection of Park Lane South and Woodhaven Boulevard “downright treacherous” for pedestrians – especially the many young students who cross there on their way to and from school – and drivers alike, parents and community leaders are calling on the city to bring immediate change to an area they said is a disaster waiting to happen.

“We cross here every day, and drivers come so, so close to us,” said Lisa Meridew, who walks her 5-year-old daughter, Alice, to  PS 254 almost every morning. “It’s terrifying. People have road rage, and they can go crazy.”

Meridew is not alone when it comes to a fear of the intersection, and a growing chorus of voices are advocating for help from the city – including Assemblyman Mike Miller (D-Woodhaven).

Miller recently sat down with city Department of Transportation Commissioner Polly Trottenberg to discuss needed changes along Woodhaven Boulevard, one of the busiest and most dangerous major roadways in Queens – and the lawmaker urged the commissioner to implement dedicated crossing times specifically for pedestrians at a number of the major sections along Woodhaven Boulevard, including at Park Lane South.

“That’s the only way I felt you could protect the pedestrians,” Miller said. “As you’re crossing, you’re always dodging the cars trying to turn.

Both Miller and Meridew agreed that at least one school crossing guard could also be a life-saver, considering students walking to a handful of different schools, including PS 254 and PS 66, will cross at the Park Lane South intersection.

“A crossing guard might be the fastest solution,” Meridew said. “A turning light could help for the cars, and they definitely need to repaint the crosswalk lines.”

Of the numerous constituents who have contacted Miller about this intersection, the legislator said many have said they feel as though they do not have enough time to cross.

“This is something we’ve been writing to the commissioner about for the past four and a half years,” Miller said of the problem with the crossing time.

The assemblyman noted that the DOT is looking into widening the median along Woodhaven Boulevard, which could provide respite for pedestrians who aren’t able to cross in time. Currently, residents say the median is far too narrow, and residents said they feel wholly unsafe standing on a small strip of concrete as cars zip by them on the boulevard.

“This is on the top of our list when it comes to the safety of our residents,” Woodhaven Residents’ Block Association President Martin Colberg said of the slew of concerns with the Park Lane South intersection. “I hope they expand the islands with more cement; I really don’t think just adding stripes will do anything. I’d like to see wider island, more signage, and some flashing yellow lights to let people know to slow down – anything that will help.”

Colberg also said residents have discussed the possibility of the city installing a speed sign to let drivers know how fast they are traveling.

The entirety of Woodhaven Boulevard – as well as the roadway it feeds into, Cross Bay Boulevard – has long been a nightmare, residents and civic leaders said. To address the long list of concerns residents have about the roadways, the city Department of Transportation held a meeting Wednesday night, following The Forum’s deadline, about improving the boulevards.

Jess Nizar, a senior organizer at the Riders Alliance, a grassroots organization dedicated to improving transportation throughout the city, has been seeking input from Queens residents about the boulevards. She stressed that pedestrians’ lives could be much improved if better bus service came to the roadways, in part because it could take cars off the road that can make life difficult for pedestrians.

“We’ve surveyed over 500 people, and people think the buses are really slow,” Nizar said. “You’ll talk to people who have two-hour commutes just to get to other parts of Queens. People in the neighborhood and the DOT are very aware something needs to happen on Cross Bay Boulevard and Woodhaven Boulevard.”

The Riders Alliance is advocating for various changes along the roadways, including  a program called “Bus Rapid Transit,” which uses such features as dedicated bus lanes and off-board fare collection to offer faster and more reliable service on high-ridership bus routes.

With better public transportation, Nizar said people trying to get to places on foot – including many of those exiting the buses – will find themselves in safer situations.

“Woodhaven is such a wide street, and the median is as big as my foot,” Nizar said. “If there’s more than one person standing on it, it’s so easy to get hit.”