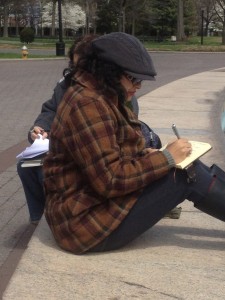 There is no amount of syntax that can take away from the inherent loneliness that comes with writing, but a borough literary weekend has set out to weaken it.

Tim Fredrick, editor for Newtown Literary, described the coming Queens Writes Weekend as the biggest of its kind – a way to bring writers together to collaborate, network, and socialize. An opening kick-off reading is scheduled for Friday, April 25 at 7 p.m. inside the Astoria Bookshop and a wrap-up open mic event is set for Sunday, April 27 at 6 p.m. inside Terraza 7 in Elmhurst.

“Hopefully, people can get some writing done,” he said. “Writing is very lonely by definition, so it’s good for writers to be able to connect with one another and learn about the different kinds of opportunities available to them.”

Queens Writes Weekend, now in its second year, is scheduled for April 26 and 27 with events throughout the borough to raise money for the nonprofit Newtown Literary Alliance. Each flag location will play host to hours of writing to showcase what Fredrick said was a thriving literary scene in the borough.

Despite popular belief, Fredrick said Queens has long been the home to some of the most talented writers to grace the entire city. But people have only recently seemed to catch on, in part because of networking events like the coming literary weekend, he said.

“The Queens literary community has really solidified over the past few years, and that’s because the writers are meeting and getting to know each other,” he said. “You meet people who work here and it only helps your craft. We’re all friendly with each other because we know these connections are very powerful.”

The money raised will help pay for various Newtown programs, including its semi-annual literary journal including the next issue due out in June, student writing contest and low-cost writing workshops.  The literary magazines feature works of writers and poets throughout the borough with authors of all ages and backgrounds.

“The goal is to continue publishing the journal. That’s our main task as long as we have the money,” Fredrick said. “For writers to have a print publication is much more prestigious than publishing solely online. There’s a bit of a bias towards print and it gives Queens writers something to add to their résumés.”

Fredrick said 2014 was the first year Newtown arranged for various writing events throughout the borough at different times because the group wanted to encourage writing Queens-wide without favoring any given community.  The group partnered with the First Tuesdays Reading Series, People for the Pavilion and Sukhi to bring in a more diverse bunch of potential writers who might realize the literary weekend is not exclusive to only poets, Fredrick said.

This year’s event was bigger than ever before – nearly doubled in size when compared to 2013, the editor said.

“Last year, we had only seven sites. This year, we got up to 11,” he said. “In the end, we are hoping the lit community will become even more connected.”

More information about Queens Writes Weekend 2014 can be found at Newtownliterary.org.