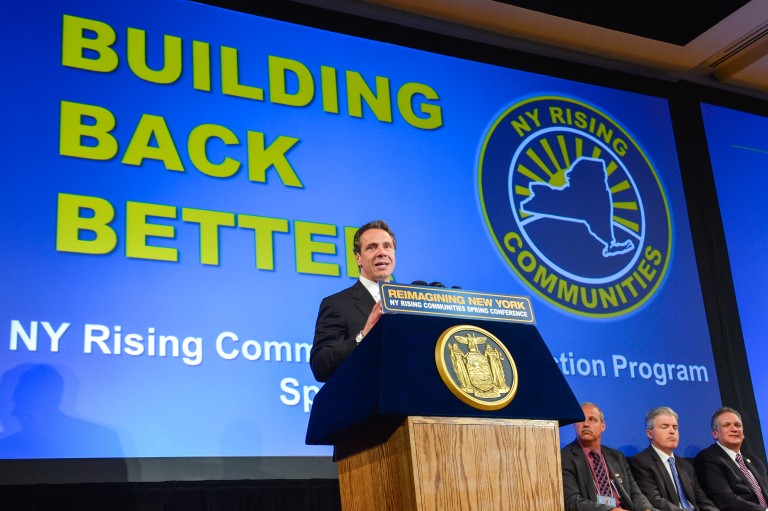 After close to a year of planning how best to prepare Howard Beach for the next Hurricane Sandy, South Queens leaders saw their ideas move closer to becoming reality at Gov. Cuomo’s New York Rising Community Reconstruction conference in Albany last week.

Each of the New York Rising groups throughout the state, including in Howard Beach and Broad Channel, have submitted to the state their recovery plans, which range from a coastal protection study to flood mitigation efforts in Charles Park, Shellbank Basin, and Hawtree Creek. Howard Beach is expected to land about $18.3 million from the state as part of the New York Rising initiative, which is giving communities across the state funding to create and at least partially implement a plan that aims to protect communities from events like Sandy.

Following last Thursday’s conference in Albany, state officials are now tasked with sorting through the project proposals and determining how much funding will go to each community for various projects.

“There’s a lot of money and hopefully it’ll get into the community fast,” said John Calcagnile, a Howard Beach-based architect and member of the area’s New York Rising committee.

Cuomo launched the New York Rising Community Reconstruction Program in order to aid communities that suffered extensive damage in Sandy, Hurricane Irene, and Tropical Storm Lee. Established in April 2013 by the governor, it is funded almost entirely by more than $600 million in federal funds through the Community Development Block Grant – Disaster Recovery program.

“Rebuilding our communities is something that we cannot do from Albany or Washington, rather, we have to do it community by community across the state,” Cuomo said at the conference that featured thematic presentations on coastal protection, economic development, and storm water management, among other topics.. “There are certain things that the government should do on a top-down, macro level – and we have been doing exhaustive systems redevelopment and are actively preparing citizens across the state by holding emergency preparedness training events and opening the College of Emergency Preparedness and Homeland Security. But the way to really build New York back was to go to affected communities and ask them to come together and figure out a plan for what their specific community needed, so that we could fund their vision.”

Howard Beach’s New York Rising group, which was made up of area civic leaders and residents, has been crafting plans since last summer and has held a series of public meeting to garner input from the general public. The members have authored a number of proposals, including the construction of tidal gates, restoring Lindenwood’s Upper Spring Creek, creating a relief center at the Peter J. Striano Senior Housing at 155-55 Cross Bay Blvd., mitigating flooding around Coleman Square, and implementing upgrades to the West Hamilton Beach Volunteer Fire Department, among a series of other plans.

“The most important projects are the ones that take care of our shoreline,” said Community Board 10 Chairwoman Betty Braton, also a member of Howard Beach’s New York Rising group.

Leaders involved in the New York Rising process praised it, saying it brings much-needed resources to areas still reeling from the impact of Sandy.

“It has, in the case of Broad Channel, produced a number of practical and applicable projects that will definitely ensure that this town and our critical components are more resilient in the event of another major storm,” said Dan Mundy Jr., the chairman of the Broad Chanel’s New York Rising committee. “…The ultimate success of the program now depends on the ability to see these great concepts funded and constructed as soon as possible. As an island town in the middle of Jamaica Bay, we understand how vulnerable we are in the event of another Sandy type of storm and urge the implementation of these projects as soon as possible.”

As others said, Assemblyman Phil Goldfeder (D-Rockaway Park) emphasized the need for action from the state now that the proposals have been submitted.

“Arguably the hardest part of the process is coming up with a plan,” Goldfeder said. “Now that we have one, the pressure is on the state to actually implement it. The community has done their part by investing months and months coming up with a good plan for the state, and now I hope the governor will implement all the recommendations as quickly as possible.”