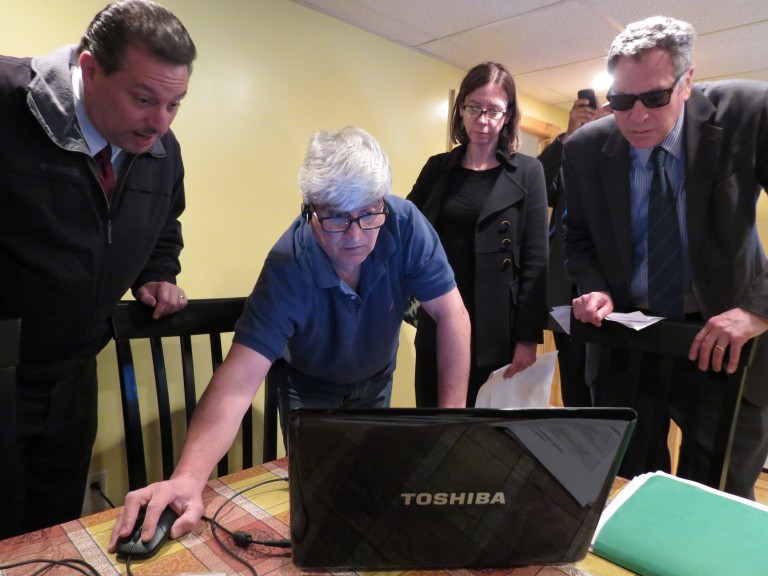 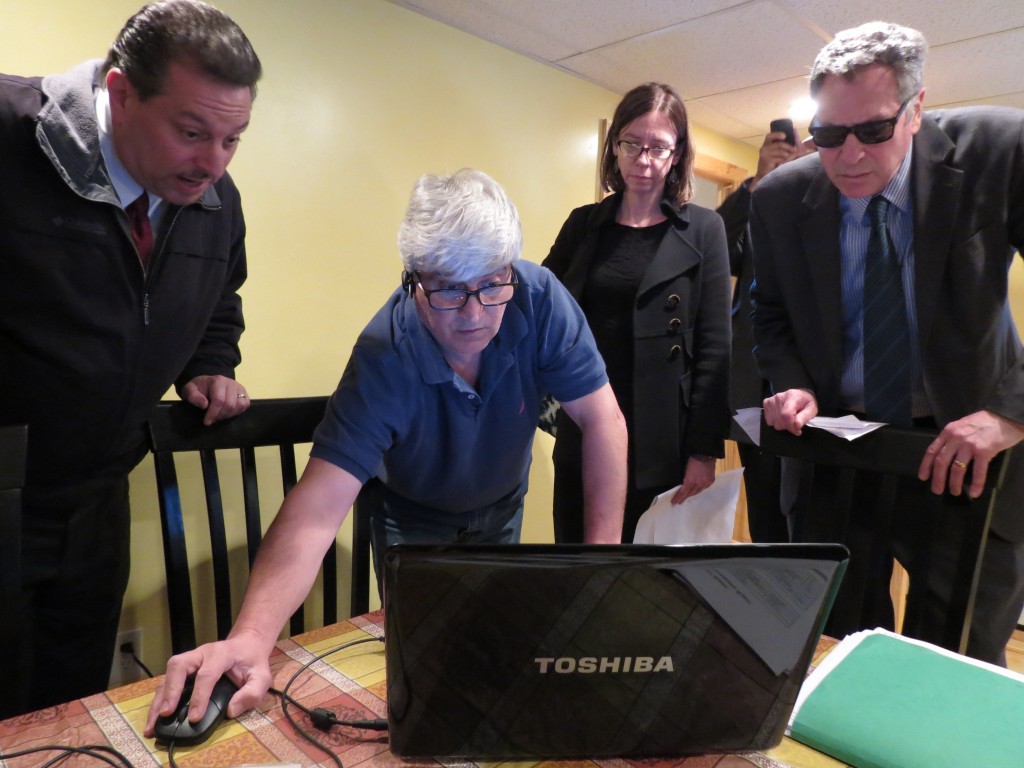 State Sen. Joe Addabbo Jr., left, Pellegrino Bongiovi, Amy Peterson of Build It Back, and Bill Goldstein of Build It Back, spend time last Thursday in Bongiovi’s basement that was ruined during Hurricane Sandy.  Photo by Anna Gustafson

As the new head of the city’s Build It Back program, Amy Peterson, toured Howard Beach last week, looking at photos of water-filled homes left nearly unrecognizable to those who had lived there for decades and standing in houses so badly damaged during Hurricane Sandy that people had to take out thousands of dollars in loans, she made a promise: Help, she told those who said they have nearly given up believing the city will ever come to their aid, is on the way.

“We’re going to fix this,” Peterson said of the much-beleaguered Build It Back program – which was set up by former Mayor Bloomberg following Hurricane Sandy with the goal of helping people devastated during the storm that swept much of the eastern seaboard at the end of October 2012.

Despite its intent, the program, according to everyone from residents impacted by the hurricane to elected officials and civic leaders, has failed miserably, and, of the more than 20,000 people who have applied for help, just a handful have gotten it 18 months after Sandy hit. As of The Forum’s press time, the city has begun construction on five homes in Queens – including one in Howard Beach – and 20 reimbursement checks have gone out to residents in the borough. Citywide, there are 17 homes being constructed and 79 reimbursement checks have been issued. While these numbers are low, city officials stress that they were at zero when Mayor Bill de Blasio took over in January.

Though the city is finally kicking its rebuilding program into gear, the fact that it is happening a year and a half after the storm, residents said, has meant that many people are still living out of their homes – on which they are paying mortgage – and are financially hemorrhaging after having to empty retirement funds and college savings to be able to move back into their houses.

“As Amy understands the task ahead of her – to try and right the ship and correct the problems and alleviate the frustrations people are having – for her to spend a moment of her day in the district was important,” said state Sen. Joe Addabbo Jr. (D-Howard Beach), who brought Peterson; Bill Goldstein, Build It Back’s senior advisor for recovery, resiliency, and infrastructure; and other members of de Blasio’s Sandy recovery team around Howard Beach last Thursday.

Addabbo, as well as other elected officials throughout the areas hardest hit by Sandy – Rockaway, South Queens, South Brooklyn, and Staten Island – have said they hope the response by the new Sandy team, many of whom, including Peterson, were just appointed to their positions by the mayor about one month ago, is indicative of a positive change for residents who have been struggling for a year and a half to get their lives back on track.

“As if being devastated by Sandy wasn’t enough, it’s no secret my constituents have continued to hurt through the recovery process,” Addabbo said. “Some have spent their life savings on rebuilding, others have gone into debt, and some are still not back in their homes. I hope having Bill and Amy hear of the damages straight from the people who experienced the devastation will at long last get effective results.”

Among those with whom Peterson met were Andrea Mercatante and Pellegrino Bongiovi, both of whose houses were devastated during Sandy and who have been fighting with the city since Build It Back’s inception for help.

Armed with a thick manila folder filled with papers documenting her numerous exchanges with Build It Back, Mercatante, who lives in Howard Beach with her husband and two sons, told Peterson said that since applying to the program in August she has been paralyzed by red tape and, like everyone with whom The Forum has spoken, has had her paperwork lost by the city.

To add insult to injury, Mercatante was told that she and her family were “priority two,” meaning she wouldn’t immediately be reimbursed for the work on her home that the family had already paid for – leaving her questioning what they were going to do financially.

“I have twins going to college in the fall; I have a 19-year-old in college,” Mercatante said. “We used up our 401K, I took out a loan, I used up every single resource possible.”

De Blasio recently announced an overhaul of the Build It Back program, and with it came a promise that individuals, like Mercatante, would not have to wait longer than others to be reimbursed because of their income.

And the Howard Beach resident told Peterson that help cannot come soon enough, especially after having to take on what has felt like a second job just to receive a portion of the funding originally allocated by the federal government for the city.

“Every step of the way has been a fight,” Mercatante said.

As Bongiovi showed Peterson and the others photos of the devastation following the storm – which left his basement in shambles, forcing him and his wife to throw out items representing decades of memories, he said he too had shelled out a six-figure total to restore his home.

“The force of the water broke our door open,” Bongiovi said. “…Everything had to get gutted to the bare bones.”