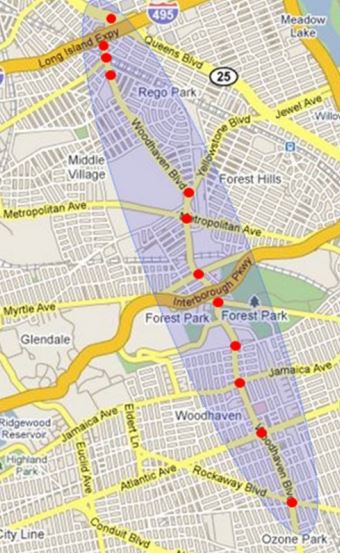 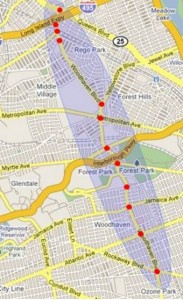 Implementing express bus service along Woodhaven Boulevard, from Ozone Park to Elmhurst, would alleviate the traffic congestion that has long plagued one of the busiest, and most dangerous, corridors in the borough, area leaders said of the plan pushed by city Department of Transportation officials during a meeting at JHS 210 in Ozone Park last week.

“Queens is the only borough without select bus service,” Councilman Eric Ulrich (R-Ozone Park) said at the Woodhaven Residents’ Block Association meeting last Thursday of the city’s bus program that was launched in 2008 in an attempt to decrease congestion and travel time by allowing riders to pay off-board and creating bus-only lanes. “It’s going to help a lot of the bottle-necking situations you see at Jamaica Avenue and Woodhaven, for example. It’s going to improve safety.”

Calling implementing select bus service – or SBS – on Woodhaven Boulevard, as well as Cross Bay Boulevard, a “big priority,” DOT Commissioner Polly Trottenberg has said such a plan could make life much safer – and easier – for residents who use the corridor that is time and again named one of the most dangerous spots for pedestrians in Queens. City officials kicked off their public meetings on the proposal at JHS 210 last Wednesday, during which they said they have a short-term plan to implement targeted bus lanes and a long-term proposal of installing SBS.

According to a plan presented at the meeting, the city aims to dedicate one lane for buses and right turns from Metropolitan Avenue to Eliot Avenue along Woodhaven Boulevard from 7 a.m. to 7 p.m. Monday through Friday. Additionally, officials said they would like to install a curbside bus lane northbound approaching Liberty Avenue and southbound approaching Rockaway Boulevard, which would also be in effect 7 a.m. to 7 p.m. Parking would still be allowed in the curbside lanes when they are not in effect.

“One stipulation we’ve given the city is we absolutely do not want them to take away parking,” Ulrich said. 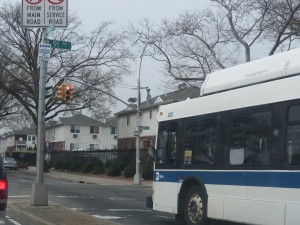 Should “select bus service” be implemented along Woodhaven Boulevard, city officials said it would help to reduce traffic through creating a bus-only lane and allowing riders to pay for their trip off the bus. Photo by Anna Gustafson

The councilman stressed that, despite reservations residents may have, he expects the city’s plan to likely make Woodhaven Boulevard a safer, and more pleasant, place to travel.

“In the four other boroughs where SBS has been implemented, they’ve cut travel time by 15 to 20 minutes,” Ulrich said at the same WRBA meeting. “…Keep an open mind. What we’ve been doing the last 10, 15 years hasn’t been working – we have to alleviate what is a traffic nightmare.”

City officials said they are going to continue seeking public input on the select bus service and are expected to hold more meetings in the impacted area at future dates.

For more information about the city’s plans, visit http://www.nyc.gov/html/brt/html/routes/woodhaven.shtml