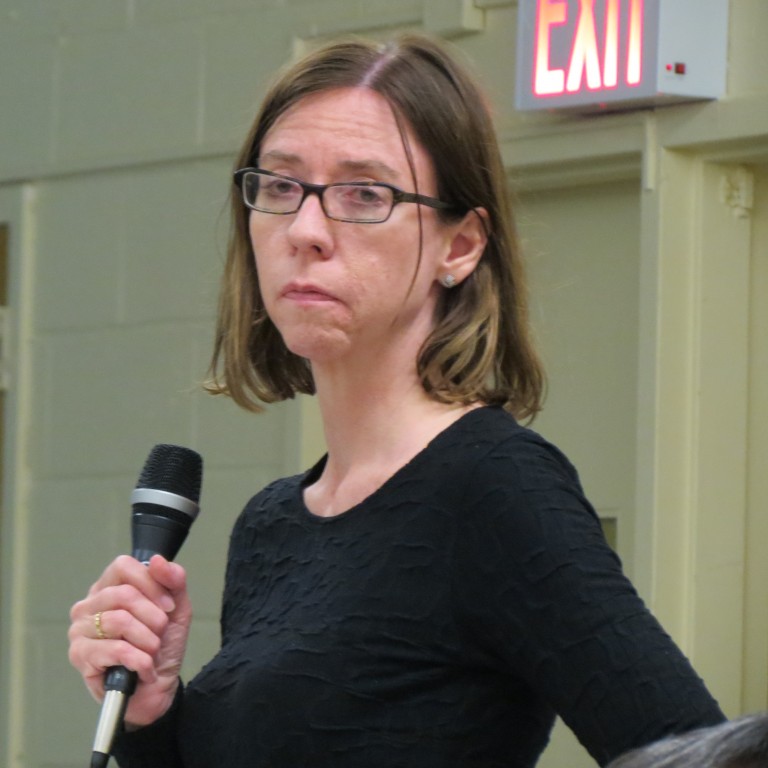 Amy Peterson, the new head of Build It Back, said she is “cautiously optimistic” that the city will be able to hold onto $1 billion in Sandy aid from Washington D.C. Photo by Anna Gustafson

Thousands of city homeowners who applied for help from the Build It Back program may not receive assistance because the federal government could divert $1 billion – or more – originally allocated for Sandy aid to other parts of the country, according to area leaders who this week slammed the possible move by the Department of Housing and Urban Development.

HUD recently proposed doling out at least $1 billion of the $3.6 billion that had originally been slated to help Hurricane Sandy victims in the city to storm resiliency efforts elsewhere, which the advocacy group Alliance for a Just Rebuilding said in a report released this week could impact individuals and families living in some 9,000 homes and 235 apartment buildings. Those in the more than 9,000 units have applied for financial help from the city under the Build It Back program, but would likely see no aid should the $1 billion be disbursed elsewhere, according to Alliance for a Just Rebuilding.

“Sandy-impacted neighborhoods are still struggling to rebuild their communities and their lives,” Susannah Dyen, of the Alliance for a Just Rebuilding, wrote. “If HUD diverts $1 billion away from New York, the most vulnerable will be left out of much-needed aid and further see their situations deteriorate.”

Despite the news, Amy Peterson, the newly appointed head of Build It Back, said at a meeting of the Howard Beach-Lindenwood Civic Tuesday evening that city officials are “cautiously optimistic” that the $1 billion will be headed their way.

“The more everyone’s pushing Washington, the better off we’ll all be,” Peterson told an anxious crowd in Howard Beach.

Queens’ representatives in Washington lambasted HUD this week, with U.S. Sen. Chuck Schumer (D-NY) joining forces with U.S. Sen. Robert Menendez (D-NJ) to urge HUD to rethink the proposal and U.S. Reps. Hakeem Jeffries (D-Queens, Brooklyn) and Gregory Meeks (D-Queens) holding a press conference at City Hall to also call on the federal government to bring the city the funding they said is desperately needed by families still trying to piece together their lives after Hurricane Sandy.

“It’s outrageous that we are even discussing a potential plan to redirect Sandy relief dollars to states across the country, while homeowners in New York and New Jersey are still waiting on much-needed aid,” Schumer said.

Schumer and Menendez championed, and helped to pass, the $60 billion Sandy Relief Bill in Congress in January 2013. Of that pot of funding, $15.2 billion went to disaster relief funding administered by HUD. So far, more than $10 billion of that has been spent and approximately $3.6 billion remains.

Lawmakers recently became aware that HUD is considering spending a portion of the remaining $3.6 billion on a national resiliency competition for states hit by natural disasters in 2011, 2012, and 2013. Schumer and Menendez stressed that no such contest should be considered before all Sandy-related housing needs are met.

“We all know that Sandy victims throughout New York and New Jersey are still getting back on their feet and making repairs to their homes, and I will fight for them to be the number one priority for remaining housing aid, as has always been intended, before a single dollar is put up for grabs in a national resiliency competition,” Schumer said.

Jeffries and Meeks too echoed these sentiments.

“A year and a half later, thousands of New Yorkers are still struggling to rebuild their homes and businesses in the aftermath of Superstorm Sandy,” Jeffries said. “It is perplexing to me, as a representative of some of the hardest hit communities in the city, that [HUD] would consider redirecting funds to areas outside of the northeast absent significant consultation.”
By Anna Gustafson