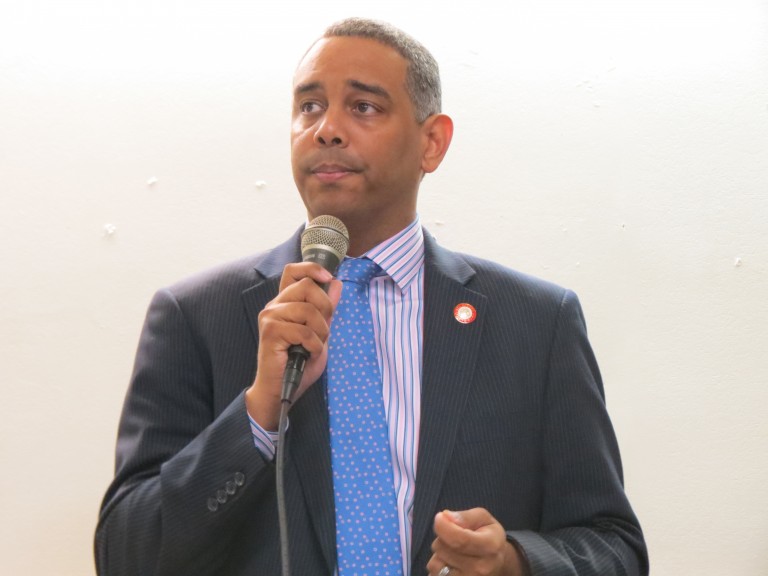 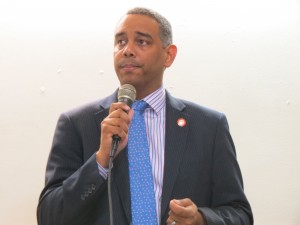 Councilman Ruben Wills (D-Jamaica) was arrested early Wednesday morning and charged with pocketing thousands of dollars in public campaign funds and charitable grant money for personal benefit – including to purchase a Louis Vitton bag and embark on shopping adventures in Nordstrom’s and Century 21, according to state Attorney General Eric Schneiderman and state Comptroller Thomas DiNapoli.

“The crimes Mr. Wills is accused of committing represent a shameful breach of the trust his constituents have placed in him,” Schneiderman said. “New Yorkers are repeatedly asked to have faith in our leaders, and it appears that faith has been shattered once again. Every time my office arrests a corrupt public official, it sends the message that elected office does not come with a blank check or a license to break the law.”

Wills, 42, pleaded not guilty Wednesday morning at Queens Criminal Court to 12 counts, including grand larceny and falsifying business records. The lawmaker told reporters he is “not resigning on charges.”

“This is America, people, you are presumed innocent before you’re proven guilty,” Wills said to reporters.

Schneiderman and DiNapoli said Wills, 42, who covers Richmond Hill, Rochdale, South Ozone Park, and Jamaica, allegedly stole thousands of dollars from the city Campaign Finance Board and the state Office of Children and Family Services.

The Jamaica legislator allegedly worked with a relative, Jelani Mills, who was also arrested Wednesday, to funnel $11,500 of the $139,000 he landed in matching campaign funds from the city Campaign Finance Board in 2009 to a nonprofit he founded, New York 4 Life – which was set up to aid single parents and fight childhood obesity, among other initiatives. Wills then allegedly used those thousands of dollars for various personal purchases – including a $750 Louis Vitton handbag from Macy’s, according to the attorney general.

Additionally, Wills has also been charged with misusing a portion of $33,000 in state funds provided to New York 4 Life via a grant earmarked by former state Sen. Shirley Huntley while Wills was serving as her chief of staff, Schneiderman said. To obtain that money the nonprofit signed a contract with OCFS, promising to conduct four public service projects. Instead, New York 4 Life allegedly conducted just one program that cost approximately $14,000, and Wills allegedly pocketed the remaining $19,000, according to court documents.

According to Wednesday’s court filings, Wills also allegedly made large cash withdrawals from the New York 4 Life account and used grant funds to issue checks to individuals who did little or no work related to the nonprofit, the court filings said. The councilman then allegedly concealed the theft, Schneiderman said.

A number of elected officials from southeast Queens have been ensnared in what Schneiderman and Dinapoli describe as an ongoing corruption investigation. Former state Sen. Shirley Huntley, for whom Wills previously served as chief of staff, was sentenced to a year in jail after embezzling taxpayer dollars – also by using a nonprofit she ran – and state Sen. Malcolm Smith (D-Hollis) faces federal bribery charges after being arrested in April 2013.

“Charges such as these are an insult to the councilman’s constituents and to the taxpayers who paid the bills,” DiNapoli continued.

Amy Loprest, executive director of the city Campaign Finance Board, too issued scathing criticism of Wills.

“Today’s indictment is further proof that those who misuse public funds will face the consequences,” she said. “Strong enforcement has always been a cornerstone of the city’s campaign finance program because it gives New Yorkers confidence that their investment in city elections will be protected.”

Wills, who was elected to the Council in 2010, will be barred from disbursing the city funds known as member items to his district this year in light of these allegations, and he has also agreed to give up his chairmanship of the Council’s subcommittee on drug abuse.

“The City Council takes these troubling allegations from the New York State attorney general very seriously and will be reviewing them thoroughly,” Council Speaker Melissa Mark-Viverito (D-Manhattan) said in a statement. “New Yorkers expect and deserve a government that is ethical and responsible and that is the standard we’re seeking to uphold.”