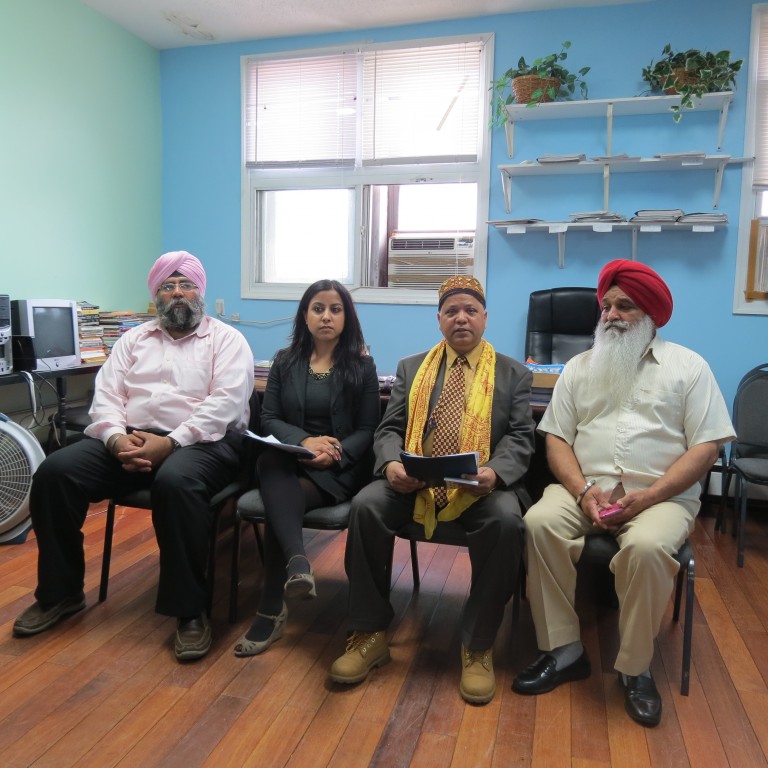 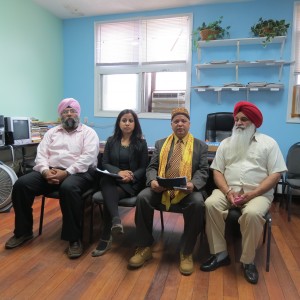 Four South Asian leaders said at a press conference Monday that they want someone from their community to challenge Assemblyman David Weprin. Photo by Anna Gustafson

After the 24th Assembly District was redrawn in 2012 to include a much larger South Asian population, some community leaders said at a press conference Monday that they are pushing for an elected official from that demographic to lead the area now represented by Assemblyman David Weprin (D-Fresh Meadows).

While the four individuals at Monday’s event – Sharon KhunKhun, a co-founder of the nonprofit SEVA; Muhammad Rashid, who owns Smart Academia in Jamaica; community leader Tehal Singh; and small business owner Sarabjit Sawhney – did not name a specific candidate for the district, though they did say they would “welcome” someone who has been listed a potential challenger to Weprin – attorney and activist Ali Najmi, of Glen Oaks.

“I’ll endorse him if he announce he’s running,” Rashid said at an event that was billed as a “rally for representation” in the assembly district that previously was dominated by northeast Queens neighborhoods but was redrawn to include South Asian communities in Richmond Hill. 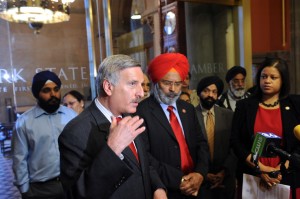 Assemblyman David Weprin, left, who could be challenged for his seat by community activist and attorney Ali Najmi, said he has worked hard in Albany on issues important to the South Asian community. Here, Weprin gathered with members of Sikh and other religious organizations gather in Albany to discuss the need to protect employees from religious discrimination in the workplace. Photo courtesy NYS Assembly

Najmi, a Democrat who worked as a legislative director for the assemblyman’s brother, Councilman Mark Weprin (D-Oakland Gardens), would not comment as to whether or not he will throw his name into the ring. While Najmi has not officially announced his candidacy, he is hosting a fundraiser on May 19 in Manhattan “in support of Ali Najmi’s candidacy for the New York State Legislature,” according to the invitation.

The four individuals at Monday’s press conference said no other names other than Najmi’s have been aired as possible contenders for the seat.

Citing increased political participation among South Asians in the district, KhunKhun noted that more South Asians are registering to vote and are increasingly looking to find someone from their community to represent them in office. KhunKhun, Rashid and the other two at Monday’s event specifically said they would like to see increased resources for seniors in the district, better schools, and more of a focus on boosting small businesses. South Asians make up 39 percent of the district’s population.

“Mr. Weprin is a respectable person, but there are issues that need addressing,” KhunKhun said.

“If a South Asian leader comes and becomes an assemblyman, that will make history,” Rashid said.

Long a political player in Queens, Weprin, who served in the Council prior to his time in the Assembly and was the chairman of the Council’s Finance Committee, said he is “proud of my work representing every community and every ethnicity in our neighborhoods.”

“I’ve been a leader in Albany on issues important to the South Asian community, opening the first-ever district office on Atlantic Avenue in Richmond Hill,” Weprin said in an emailed statement. “I’ve sponsored legislation to require schools to provide Halal food for students, spoken out against hate crimes and bias, and I’ve worked to make sure that no one faces workplace discrimination for wearing religious apparel, no matter what their faith.

“But I never rest on past work, so I’m really honored by the support and recognition I’ve received from so many South Asian leaders, and I look forward to continuing my work to serve this community as we all move forward.”