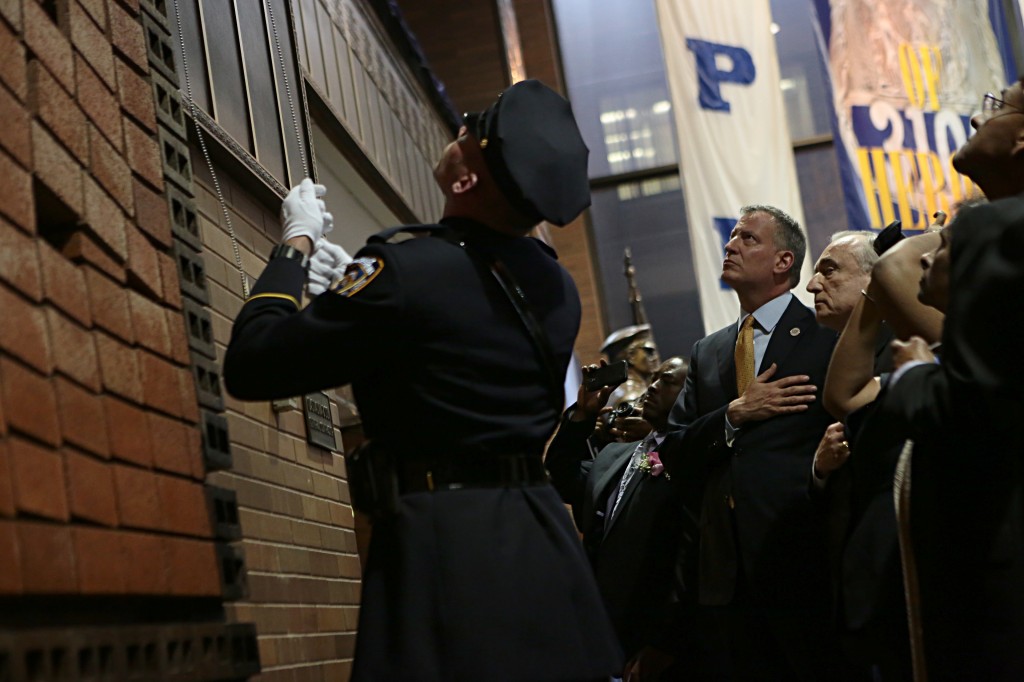 Thirteen members of the NYPD – 12 of whom died from illnesses related to the Sept. 11, 2001 terrorist attacks and one who died after being struck by a vehicle- were honored by a large, somber crowd of family, friends, and the city’s top elected officials who described the individuals being commemorated as New York’s finest during a ceremony Friday.

During the event, the 13 names were added to a memorial wall at One Police Plaza in Manhattan.

“You represent what is best about New York City,” Mayor Bill de Blasio said in reference to members of the NYPD. “You represent what is best about all the neighborhoods and communities you come from. But, unlike most citizens, you risk your lives every day for your fellow New Yorkers. So I want to thank all present today for your service. I want to remember all those who provided service and we lost. I want to thank everyone who serves this city – for their courage and for making this a safer and better city every day.”

Those leading the ceremony also spoke of Officer Dennis Guerra, of Rockaway, who died last month after responding to a fire set in a Coney Island public housing building.

“Everyone who puts on the uniform knows the risk you take, and you do it so nobly; you do it willingly,” de Blasio said. “And so many did so on Sept. 11, 2001. We lost so many good officers of this department, and we continue – tragically – to lose officers who served that day because of illnesses related to the aftermath and that tragedy.”

“So many worked in that moment to save lives, and so many worked for days and weeks and months in the recovery effort, trying to show respect for those who had fallen in the process,” the mayor continued. “They themselves became ill. And that was another act of sacrifice.”

The mayor went onto call Guerra a police officer who was “beloved by his colleagues” and “by his family, especially.” He stressed that Guerra’s partner, Officer Rosa Rodriguez, of Howard Beach, who was also hospitalized after the Coney Island fire, is “fighting a valiant fight” and “thank God, making progress every day.”

Addressing those who attended the ceremony, NYPD Commissioner Bill Bratton said, “I think all of you in this audience understand what I mean about second family.”