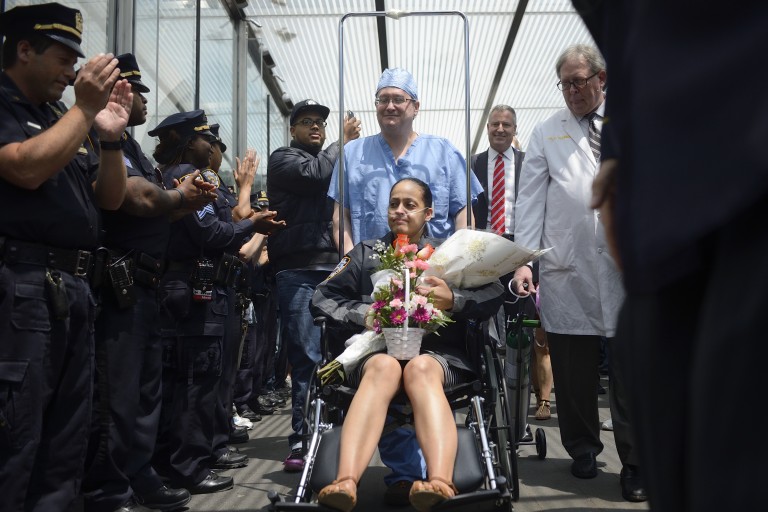 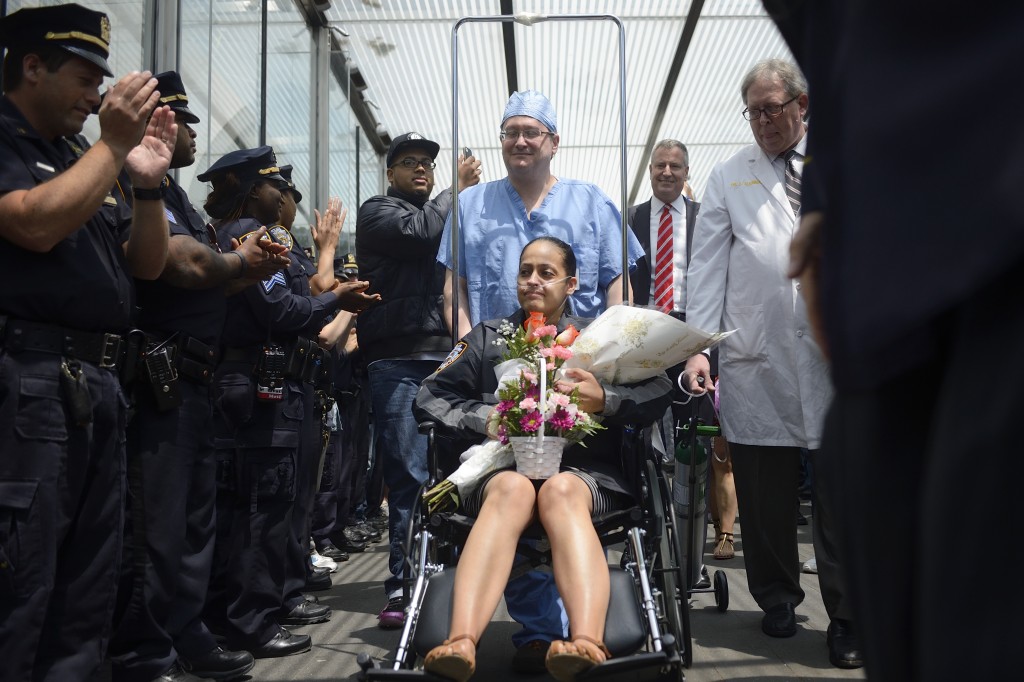 As Police Officer Rosa Rodriguez made her way to the Lindenwood home she had not seen since being hospitalized after responding to an April 6 fire that killed her partner in the NYPD, she looked at her two young daughters, both carrying towering bouquets of flowers and wearing police hats, and smiled, softly.

Life has, clearly, not been easy for Rodriguez. Because doctors were concerned about her recovering from her injuries, the 36-year-old only recently learned that her partner, Police Officer Dennis Guerra, died from his injuries three days after the blaze in a Coney Island high rise.

But, after struggling to stay alive, including being in a coma for four days, Rodriguez was able to return Monday afternoon to a home filled with family who welcomed her back with open arms.

“She’s doing really well,” said a police officer who Rodriguez asked to speak for her outside her home. 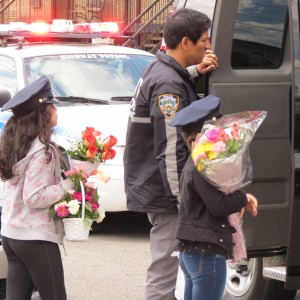 Officer Rosa Rodriguez’s family, including her two daughters, were thrilled to welcome her back to her home in Lindenwood. Photo by Anna Gustafson

“Police Officer Rosa Rodriguez is truly representative of what drives New York City police officers,” Patrolmen’s Benevolent Association President Patrick Lynch said. “She is strong, determined, and confident. She is totally dedicated to her family and her city and that is what drives her return to health. We are gratified that she has recovered enough to return to the family she loves, and we pray that we will continue to heal and one day be able to return to patrol.

Marcel Dockery, 16, has been charged with felony murder following the fire that, according to police, he allegedly set because he was “bored.” The NYPD said Dockery allegedly torched a mattress on the 13th floor of a New York City Housing Authority building in Coney Island. When the blaze got out of control, Dockery called 911 – after which Rodriguez and Guerra, a 38-year-old father from Rockaway, appeared on the scene, officials said. However, by the time the two arrived, the smoke was so toxic that they were knocked unconscious. Firefighters removed them from the 18-story building, and the officers were immediately hospitalized for carbon monoxide poisoning and smoke inhalation.

Guerra fell into a coma from which he never recovered, and he was pronounced dead at the Montefiore Medical Center in the Bronx the Wednesday after the fire.

“We’ve lost a good man…a very brave police officer who did something that most of us wouldn’t know how to do: He went selflessly toward the flames,” de Blasio said after the officer’s death.

After learning of Guerra’s death, Rodriguez has been spending time with his widow, Cathy.

“Dennis’ widow was at the hospital, and they had private time together,” said the officer on Rodriguez’s behalf.

While the officer said life is overwhelming for Rodriguez right now, he said he has no doubt that the officer and mother is well on her way to making a full recovery.