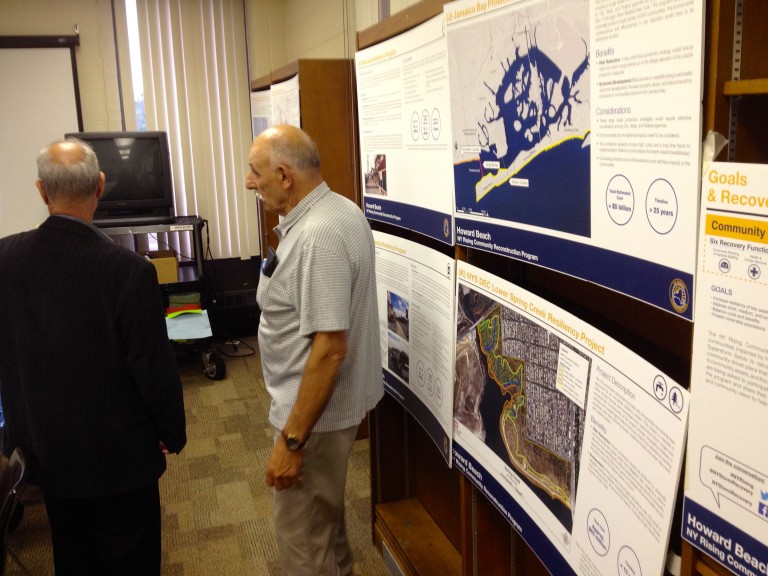 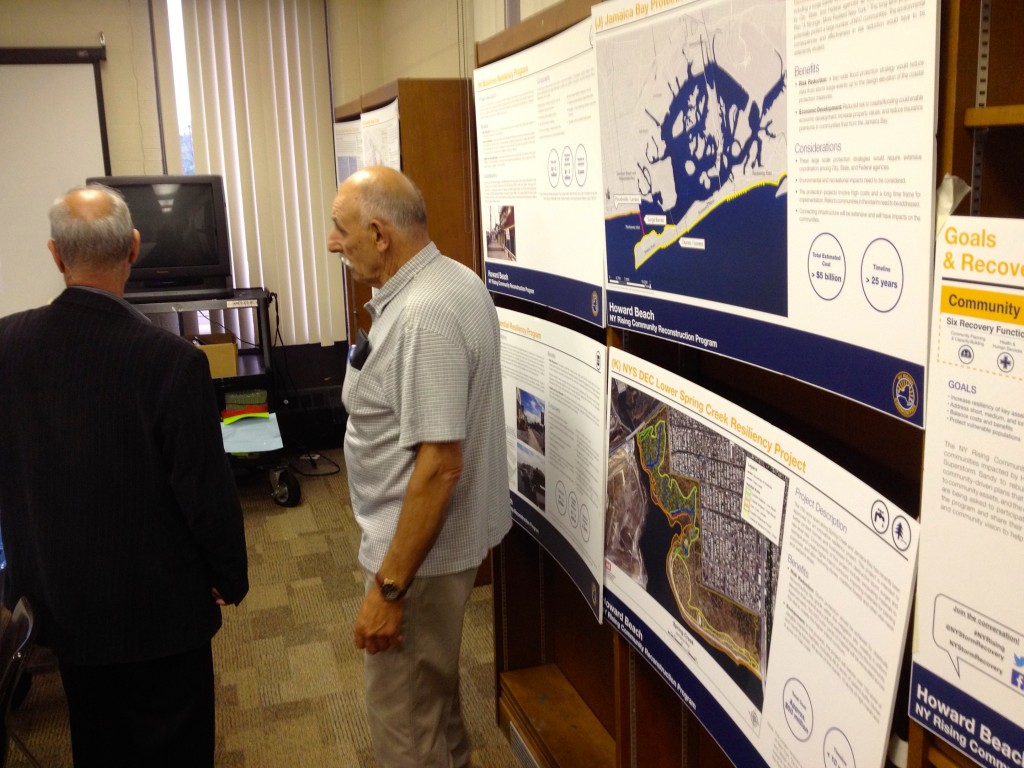 The Howard Beach library put it all on display this week, showing residents the plans Howard Beach’s chapter of New York Rising spent more than a year crafting to ensure they never see Sandy-like devastation again.

Howard Beach is slated to receive $18.4 billion from the state through its New York Rising initiative,which aims to empower neighborhoods throughout the state to develop ways to fight serious storms. Gov. Andrew Cuomo launched the plan after storms by the names of Irene, Sandy and Lee barreled through the state over recent years with help from nearly $600 million in federal community development block grant – disaster recovery money.

Nine key proposals were mapped out along the walls of the library in an open house last Thursday, at which members of the Howard Beach Planning Committee perused what they had been putting together since last year to protect its approximate 20,000 residents. The group, made up of concerned civic leaders and residents, has been plugging away at public meetings for roughly a year now mulling over the most realistic storm fixes.

John Fazio, a committee member, remembered losing five houses along the Howard Beach shoreline by the time Sandy had passed through in 2012. That experience propelled him to remain critical of the proposals lining the library walls as he favored the long-term fixes like protecting Jamaica Bay as a means of keeping Queens storm-ready.

“Everybody’s afraid of another storm,” he said. “We undid nature, and it’s up to us to fix that.”

The committee’s final project submitted to the state this month said addressing flooding issues within Jamaica Bay were paramount to the well-being of the Howard Beach area, but admitted there were still more quick-fixes needed to allow time for such a plan.

“As flood protection strategies increase in scale, they incur longer timelines, greater costs, and more complex jurisdictional coordination,” the report said. “The community must determine the optimal strategy and location for protection with the greatest likelihood for implementation.”

Fazio said the Howard Beach committee zeroed in on strategy more so than infrastructure for the short-term, like establishing relief hubs and satellite networks around the community to help the most vulnerable residents.

Frank Giglia, another committee member, said he was impressed with the state’s handling of such a sensitive subject for residents not only in Queens, but throughout the northeast. Each step of the way, he said, New York Rising has been attentive and accepting of all community input and feedback, which left him hopeful that hurricanes will have their work cut out for them in the years ahead.

“These guys were really top-notch. They put it all together well and it has been received very well,” he said. “At the end, it gave us all some kind of hope.”