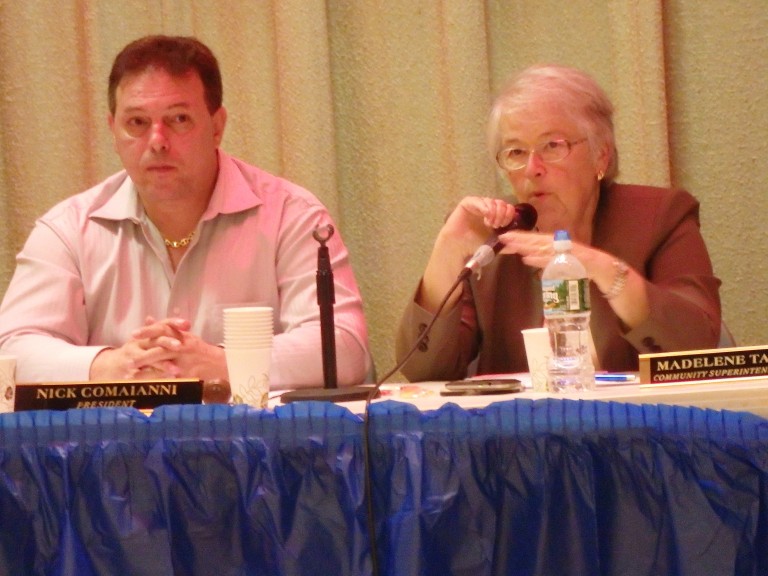 City Schools Chancellor Carmen Fariña sat down with District 24 families face-to-face this week, and Community Education Council 24 President Nick Comaianni made it clear how he felt about the new education head.

“The previous chancellors – ignore that. Because they were not real chancellors,” he said while reassuring one parent that Fariña would look into decades-old portable classrooms being used within the district. “Now, we have a real chancellor.” 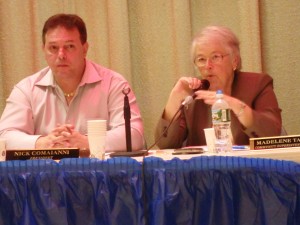 Fariña fielded questions and concerns from the active parents and educators of District 24 at PS 239 in Ridgewood, discussing the recurring issues of overcrowding, outdated classrooms, preserving seats and making the Department of Education more efficient. Many of the issues were not new, but it was the chancellor’s presence that reassured CEC leaders like Comaianni that changes were in the works.

“What a pleasure it is to have a chancellor who was an educator herself and understands our issues and our problems,” City Councilman Danny Dromm (D-Jackson Heights) said in the opening remarks of the town hall. “She knows, in many ways like I know, what we need to improve our education in this district.”

Throughout the nearly two-hour session, Fariña sat attentively as parents raised their biggest concerns. When she had an answer for them, it was provided. If not, she jotted it down in her notes and assured the matter would be looked into.

With the issue of overcrowding dominating the discussion, the new Schools chancellor jumped right into it.

“I know one of the major issues in this district is overcrowding. You can think of a new building, but it doesn’t get built overnight,” Fariña said. “I’ve been holding walking tours in Corona to see what other things we can do to make things move faster.”

The DOE has already submitted one proposal to create a zone for a new elementary school on 43rd Avenue in Corona that would open for the 2015-2016 school year. But moving forward, Fariña also urged parents and community leaders to keep an eye out for open spaces, whether up for lease or sale, so the Education Department can explore them as possible education sites.

Several parents held up neon signs calling for an overcrowding fix for PS 143 in Corona and other schools in that community, where decades-old portable classrooms have been used for what parents said is far too long. Comaianni said the CEC has been advocating for the construction of a new school right next to PS 143, and hoped the DOE would listen in finding a solution.

“The last two chancellors did not listen to us,” he said. “Chancellor Fariña will listen. We can agree to disagree, but she does listen. And when she doesn’t think your opinion is right, she’ll tell you it’s not right – and then she will give you her reasons. You will not just get a ‘no.’”

City Councilman Antonio Reynoso (D-Brooklyn) said his district had very drastic differences when it came to education issues. In the Ridgewood section, he noted overcrowding was a main concern with parents, describing it as, “kids on top of kids on top of kids.” But in other parts of his district, which lies on the Brooklyn-Queens border, he said some schools were actually under-crowded.

The packed crowd was largely receptive to the things Fariña had to say as she praised the pending United Federation of Teachers contract with the city, particularly its intentions to enhance family engagement. She detailed the additional 40 minutes teachers would be setting aside for family engagement before the room erupted in applause.

“We should not wait until the middle of the year to have these conversations with students and parents,” she said. “It is our hope that these 40 minutes every week will make a big difference.”