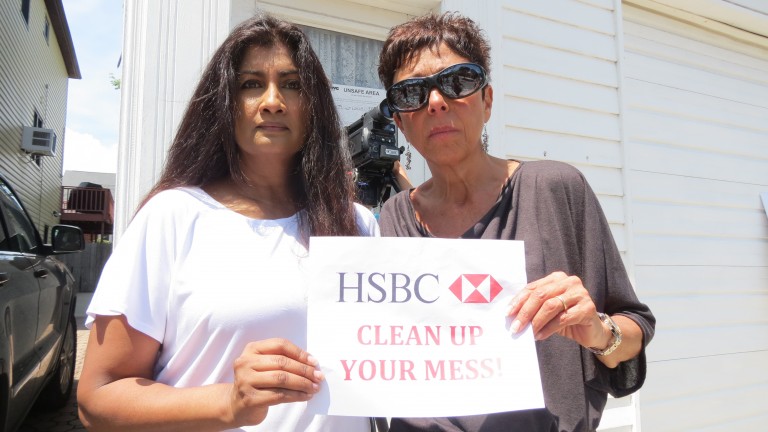 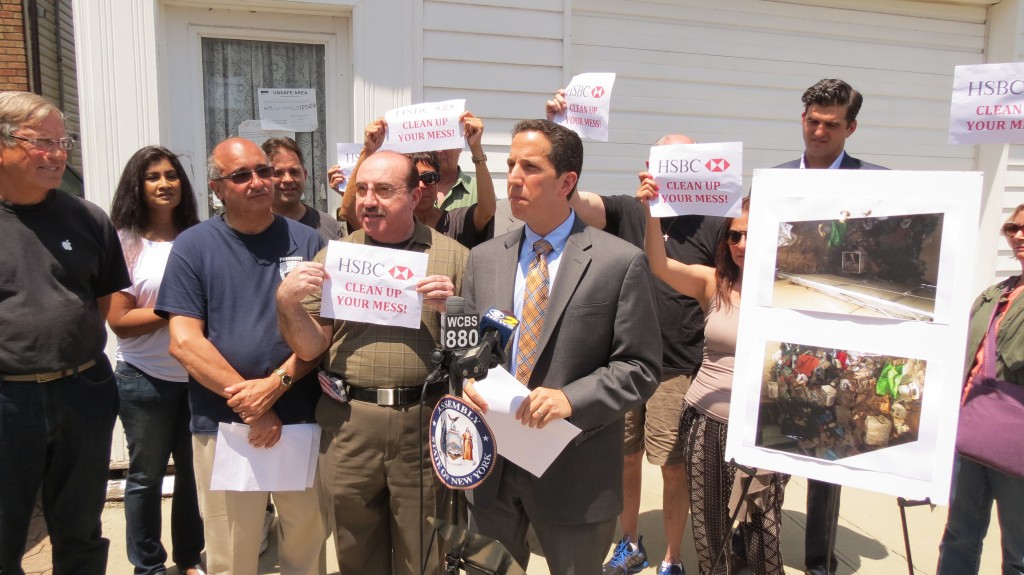 With the rising number of blighted and mold-infested properties throughout Sandy-damaged communities, Goldfeder announced at a press conference Friday a three-point plan to hold mortgage holders and banks accountable, keep residents safe, and clean up community eyesores that he said pose serious health hazards for neighbors. Photo by Anna Gustafson

Before the abandoned house next to her became a haven for filth, vermin, and toxic mold, Joyce Zoller’s residence in Rockaway’s Neponsit neighborhood had for two decades been her dream home.

It was there, on a quiet tree-lined strip in a close-knit community, that Zoller, 58, had made a life with her husband, Cliff Zoller, for more than 20 years. Even when Hurricane Sandy devastated the peninsula, leaving her house destroyed, never once did it cross her mind to leave.

This would, she believed, always be her home. There was nowhere else she would rather be.

But, after she and her husband returned in February 2013 to their renovated house after living in a hotel following Sandy, Zoller, a cancer survivor, began to notice her health quickly deteriorating.

She started having trouble breathing and consistently felt light-headed. Now, about a year and a half later, her doctors have told her she needs to leave the home because her health continues to significantly suffer while living next to the abandoned, bank-owned home at 145-08 Neponsit Ave. that has not been cleaned since Sandy and has, neighbors said, exploded into a safe haven for mold and rats.

“I walk around with a mask on inside because it’s so bad,” Zoller said. “Tell me, is that normal? And now I have to leave my own home.” 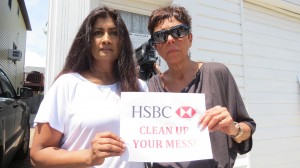 Neponsit residents Sherry Calamia, left, and Joyce Zoller are calling on HSBC to clean up the house next to them, which they said has become a haven for mold and has caused them serious health problems. Photo by Anna Gustafson

Zoller is not alone in her battle to try and get a bank-owned property – in this case, HSBC owns the house next to hers – cleaned, and Assemblyman Phil Goldfeder (D-Rockaway Park) said his office knows of about 60 sites in South Queens and Rockaway that have been left to rot following Sandy.

“Entities that should be working on behalf of communities are working against communities,” Goldfeder said in reference to the banks.

HSBC did not respond to a request for comment.

The lawmaker joined Zoller, civic leaders, and other residents at a press conference outside the Neponsit Avenue home Friday afternoon to call on banks to step up and start taking care of the properties that have long been abandoned. Goldfeder said he has a three-point plan to hold mortgage holders and banks accountable – which includes sponsoring the a bill that would require banks to maintain vacant properties no later than three months after they are abandoned, instead of at the end of a lengthy foreclosure process as is now the case; calling on the city Council to pass legislation that would allow city officials to enter abandoned homes to secure structures and remove mold or other hazardous conditions; and requesting the NYPD to create a registry that would serve as a resource for local precincts to monitor abandoned and vacant properties for any illegal activity.

“These homes are plaguing communities, and banks are revictimizing families who were devastated by a tragic hurricane,” Goldfeder said.

The bill that has been sponsored by Goldfeder is the Abandoned Property Neighborhood Relief Act of 2014.

“This legislation will create a balanced measure that will help protect our neighborhoods by identifying and ensuring maintenance of properties before they become a community hazard,” Goldfeder said. “Banks often play games during foreclosure proceedings to delay responsibility, and it is simply unacceptable.”

The Council bill Goldfeder is calling on city lawmakers to back is the Remediation of Unsafe Flooded Homes Program, which would give the Department of Housing Preservation and Development and the Department of Buildings the power to inspect, remediate, and correct conditions in vacant homes and hold mortgage holders responsible for the cost.

“I have to be on allergy medication all the time because of this,” Calamia said. “My asthma is so bad that I’m having to take steroids every day.”

Numerous civic leaders joined residents and Goldfeder in their call for action, with Danny Ruscillo noting that, after Sandy, numerous people started referring to the health problems that plagued the peninsula – much of it, residents said, due to mold – as “the Rockaway cough.”

“People have complained of bronchitis, coughs, and throat irritation – something is wrong here,” Ruscillo said. “We need the Department of Health back in this community. The waters may have receded but the germs and toxins have been left behind.”

Civic activist Lew Simon echoed the sentiments of Goldfeder and others, saying the banks and mortgage companies “who have abandoned their properties must be held accountable.”

And Belle Harbor Property Owners Association President Hank Iori noted that on “every block, you can find one or two houses that really need to be looked at.”

Now, as Zoller and her husband pack their belongings and head to Bay Ridge in Brooklyn to live, she said she will not stop fighting to return to a place she will always love: Home.

“I’ve fought cancer; I know how to fight,” Zoller said. “We’re not giving up.”