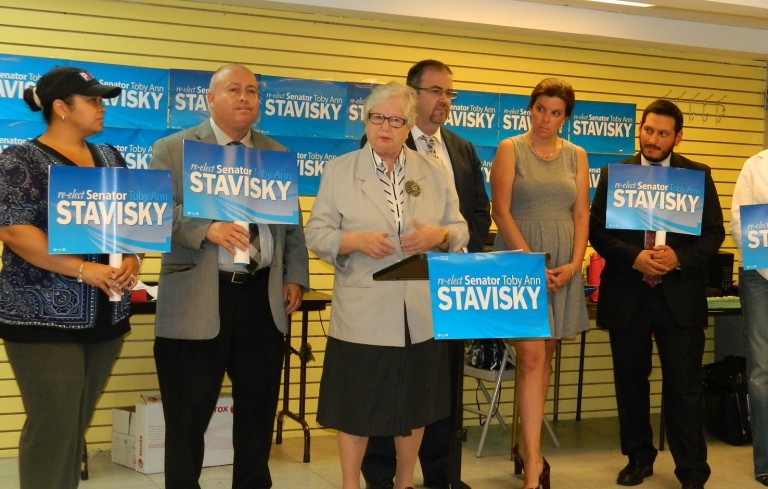 State Sen. Toby Stavisky (D-Flushing) accepted key endorsements this week from some of the city’s biggest voices on education representing more than 140,000 teachers and school employees.

The United Federation of Teachers, the New York State United Teachers and the Professional Staff Congress all threw support behind the former teacher and seven-term senator, citing her education background as a motivator for their decision. It was the first time that NYSUT, an umbrella organization for the UFT and PSC, endorsed an elected official in New York City.

“As a former public school teacher, Toby Ann Stavisky understands and respects the vital work our members do every day on behalf of all New Yorkers,” said NYSUT president, Karen Magee. “Her legislative service is distinguished by strong support for public schools, higher education and labor—a stellar record that earned her an early and enthusiastic endorsement by NYSUT.”

Stavisky was first elected into the northeast Queens seat in November 1999. Her most recent reelection bid came in 2012, when she secured more than 70 percent of the vote, records showed. She was the first woman to be elected from Queens into the state Senate in history and also the first woman to chair the Senate Committee on Higher Education.

Educational leaders praised her background at an endorsement announcement last Friday in Flushing.

“Her record of fighting to protect the quality and affordability of a City University of New York education and vocal support of the NY DREAM Act are just part of what makes Toby Ann Stavisky the right person to represent the 16th Senate District,” said Barbara Bowen, president of the Professional Staff Congress, the union representing 25,000 faculty and staff at CUNY. “Sen. Stavisky also has a long history of fighting for jobs, public education, tenants and more progressive taxation.”

Stavisky already collected endorsements from the Queens County Democratic Party as she prepared for a primary run against S.J. Along with the Democratic Party came support from other borough elected officials, including U.S. Rep. Grace Meng (D-Flushing), City Councilwoman Karen Koslowitz (D-Forest Hills), City Councilman Ron Kim (D-Flushing), state Assemblyman Ron Kim (D-Flushing) and several others. Jung, a Flushing activist and businessman. Jung ran for the same Flushing seat back in 2009 but lost by a slim margin.

“As a former high school teacher who has seen city classrooms firsthand, I am honored to have received the endorsement of NYSUT, the UFT and PSC,” Stavisky said. “The future of New York City, and the future of Queens, depends on the education students receive today. I look forward to continuing my work to strengthen schools all across New York.”