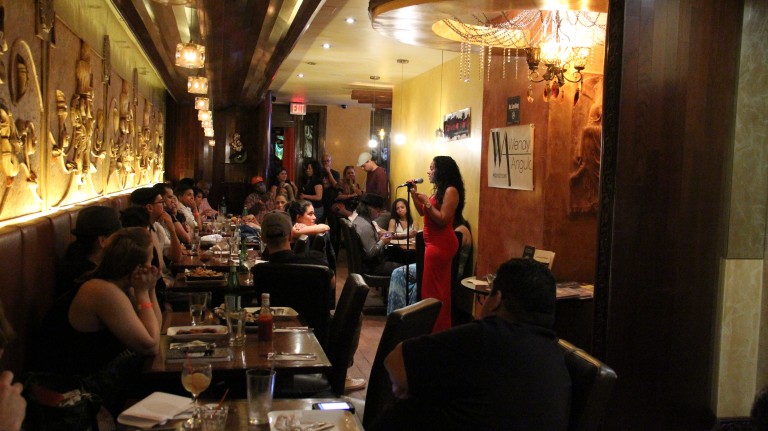 Poets took turns at the microphone inside a Kew Gardens bar to share their work. Photos by Cesar Bustamante

Laughter and cheers echoed a Kew Gardens bar over the weekend as artists coming from as far as Rockland County participated in the first Canvas of Word open mic event.

A new monthly series at Katarina Bar and Grill was established to give artists a venue to promote their work while allowing organizer Wendy Angulo to find new Queens-based artists for her Canvas of Words arts festival in October.

“I wasn’t expecting the turn out that we had but I’m really grateful. I mean, it went over and hour and half than the original show [schedule],” Angulo said. “They’re already looking forward for the next one.”

Some borough residents said they were especially happy to see the Kew Gardens venue being used to house an open mic event like this one because it brought neighborhood artists into the spotlight.

“Usually the poetry locations or the poetry spots are in Manhattan or Brooklyn,” said Rafael Landron, a Corona-based poet. “You have to travel all over the city but to have a good production night here in Queens is invaluable.”

Host and poet Erik “Advocate of Words” Maldonado said he was very pleased at how vibrant the interactions were between the audience and the performers. 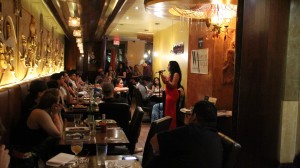 The open mic event showcased some of the borough’s best in diversity and art. Photos by Cesar Bustamante

He also said they invited established poets, Peggy Robles-Alvarado from the Bronx and Thomas Fucaloro from Staten Island, as featured performers to help draw fans from outside Queens.

They wanted to get people outside of Queens and showcase the kinds of culture available in the area while also developing connections between artists, Maldonado said.

“It was probably the most diverse performance I’ve been to,” said former Queens College student Shane Hanton, who traveled from Hell’s Kitchen in Manhattan for the event. “An equal amount of female and male performers, the diversity in the crowd and the performers. It was beautiful.”

Hanton also said he was especially interested in an event like this one in Queens because the borough was notorious for its flouring diversity.

The next Canvas of Words reading was scheduled for July 11 and will also act as a fundraiser for the Nuyorican all-women poetry slam team later this year.