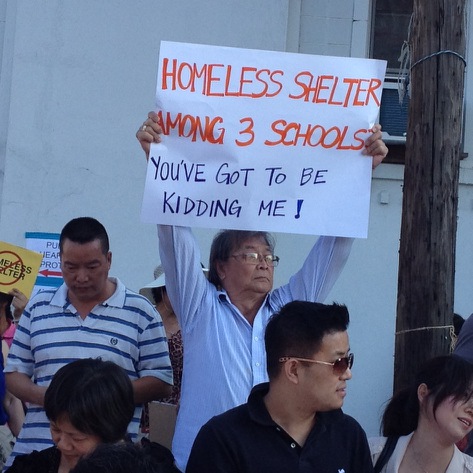 Just weeks after a massive rally outside of the building, residents of Elmhurst came out in droves Monday night to protest the placement of a homeless shelter inside the Pan American Hotel.

Officials said there were 90 families currently living inside the Queens Boulevard building – 49 more since the last time protestors rallied outside of it. City Councilman Daniel Dromm (D-Jackson Heights) said his office has been trying to figure out the next move to come out of nonprofit Samaritan Village, which has been considering using the building as a shelter.

The lawmaker wrote a letter on June 23 to Commissioner Gilbert Taylor from the Department of Homeless Services to address his concerns about the shelter.

“DHS needs to reconsider its policy of adding a large number of families in an area already overburdened with overcrowded schools and a hospital that is among the busiest in the city,” Dromm said.

State Sen. Toby Stavisky (D-Flushing) released a statement late last month said her office was also yet to receive information on the use of Pan Am as a shelter.

Some residents shouted in unison and held signs saying, “Say no, Samaritan Village has to go.” Jennifer Chu, a board member with the COMET Civic Association, said residents in Elmhurst have been doing anything they can to get answers from Samaritan Village as to what precise plans are currently in place, but little has been discussed to this point.

“The hotel will house over 200 families and we are not getting answers from the Department of Homeless Services or Samaritan Village about whether or not any of these families have a drug problem or a criminal background,” Chu said. “I am concerned because I live right behind the hotel in Elmhurst and this shelter will also be in close proximity to three schools in the area.”

One of the biggest concerns from the civic, Chu said, was the feeling of getting short-changed because of a lack of transparency and information.

“I think it is good if the population of the homeless families in which the shelter wants to hold can be reduced because over 200 families is just too much,” she said. “Hopefully, we will get answers soon.”

Roe Daraio, president of the COMET Civic Association, helped organize a major rally outside the building in June after she said her group was outraged with the city selecting Pan Am – one block away from the Metro Family Residence shelter – without consulting the community. Civic members including Daraio said housing 216 families inside the hotel would essentially be human warehousing and a detriment to the neighborhood.