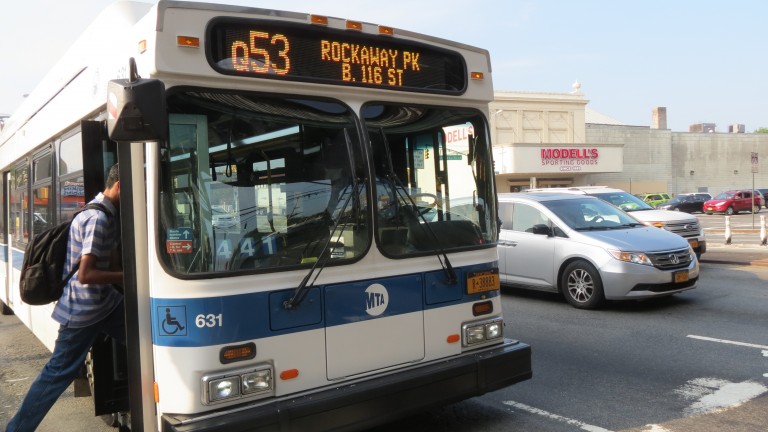 Residents are concerned that the Department of Transportation’s plan to install a bus lane with select bus service along Cross Bay and Woodhaven boulevards would negatively impact parking, local bus services and traffic in the congested area. Photo by Ashley Helms

Queens is still the only borough without a select bus service, but that may soon change.

A city Department of Transportation plan to construct specific bus lanes along Woodhaven and Cross Bay boulevards, with hopes of installing select bus service along the route going forward, has drawn criticism from some residents who fear that traffic, parking and local bus services would be adversely affected by the plan.

Residents sounded off in a forum held on June 26 at PS 306 to discuss the matter.

The city’s plan included installing bus lanes down both boulevards and turning the Q52 and Q53 routes into select buses from the Rockaways to their terminals in Woodside and Elmhurst. The buses will then have lanes dedicated to them and passengers will be required to pay for their fares through a ticketing system at the bus stop before boarding in order to speed up transportation between the Rockaways and northern Queens, the DOT’s proposal said.

The DOT is slated to install the new bus lanes on Woodhaven Boulevard between Eliot and Metropolitan avenues, where eight lanes of traffic allow for a bus lane to be built without much of an affect on curbside parking or traffic. But south of Metropolitan Avenue, the busy overpass that spans the Long Island Railroad carries just six lanes, and on the southbound side, the left lane is used by vehicles turning left onto Union Turnpike.

A spokesman for the DOT did not return requests for comment.

Kenichi Wilson, chairman of the transportation committee for Community Board 9, said traffic backs up most between Yellowstone Boulevard and Metropolitan Avenue, making a bus lane in that specific area most efficient. Trucks cannot double park in front of businesses to make deliveries in a select bus lane like they are allowed to do in normal traffic lanes, Wilson said, posing a possible inconvenience for shop owners.

“I live on Woodhaven Boulevard and for them to want to have a bus lane only from 7 a.m. to 7 p.m. is obscene,” Wilson said. “There is not so much traffic during those times to limit business deliveries. It only starts building up at 3 p.m.”

Sharing similar concerns, Phil McManus, a Rockaway resident who formed the Queens Public Transit Committee, said the select bus service should be used to connect Queens with the other boroughs if it is installed. A select bus could impact elderly riders who may have to travel further to get to a stop and the Q52 and Q53 local service should remain intact, McManus said.

“I do not think they are thinking big enough,” McManus said. “The select bus service reduces travel time, but it is really a glorified Q52 or Q53.”

Wilson also said some residents feel there has not been enough community outreach by the DOT over the new traffic patterns and that he is planning to request that the MTA and the DOT attend the first Community Board 9 meeting in the fall.

“There’s no scenario for how it could possibly work. Everyone is for making transportation better, but it can’t affect the community,” Wilson said. “It is going to be a heavy burden and we can already see it.”

Wilson also said he felt there were not enough traffic lanes to make the plan work as is and suggested that select bus service could instead be brought in without a dedicated lane.