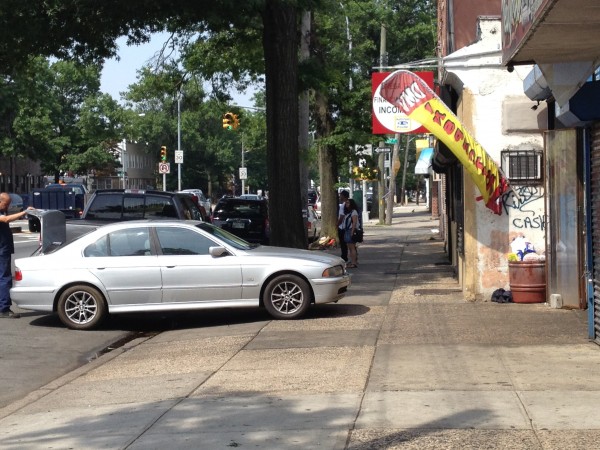 A car is parked on the sidewalk outside an auto body shop on Atlantic Avenue, where residents say traffic makes for dangerous conditions. Photos by Phil Corso

For such a small patch of Atlantic Avenue, residents of Woodhaven have a lot to say about cars and commotion between 87th and 88th Streets.

The area has been riddled with complaints over graffiti and misconduct for years, and Woodhaven resident Patty Eggers said she has had enough of it.

The group she was referring to included those steering in and out of two auto body shops on Atlantic Avenue, where Eggers said loitering has taken her community hostage. She has been fighting the eyesores, double-parked cars and noise complaints for months and said the 102nd Precinct needed to step up its enforcement there.

“We are scared to see things get worse there,” she said. “There aren’t any boundaries anymore.”

“This has been something that has been reported for years and years,” Wendell said. “We have a lot of issues in this community – low hanging fruit kind of issues. Yet they continue. They sit there, and people get frustrated.”

Martin Colberg, president of the WRBA, said Eggers pushes the issues at his group’s town hall to make sure they are not forgotten. Progress was still in the works, he said.

“We are working with Patti, a few of her neighbors and the 102nd Precinct to have the issues looked into with more detail,” he said. “Some of the issues have been ongoing for some time and we really need something done very soon.”

The same location has been under the microscope several times in the past, thanks to Eggers’ advocacy. She has been bringing issues like graffiti and noise complaints to civic meetings on a routine basis and said her frustrations have only mounted.

State Assemblyman Mike Miller (D-Woodhaven) has been partnered up with Eggers and her Woodhaven neighbors and has been in talks with the 102nd Precinct to silence the concerns. Miller had previously helped push issues like security cameras near graffiti hotspots at Atlantic Avenue and Rockaway Boulevard.

The site along Atlantic Avenue has also been the scene of several horrific traffic accidents, including one in May that killed 26-year-old William Guevara-Delgado. The Woodhaven native was hit by a box truck while crossing the avenue near 85th Street.

The city put Atlantic Avenue on its list of speed reduction projects in accordance with Mayor Bill de Blasio’s Vision Zero initiative to curb traffic-related casualties to zero over the next decade. Last year, the city moved to reduce the speed limit along eight miles of Atlantic from 30 miles per hour to 25.