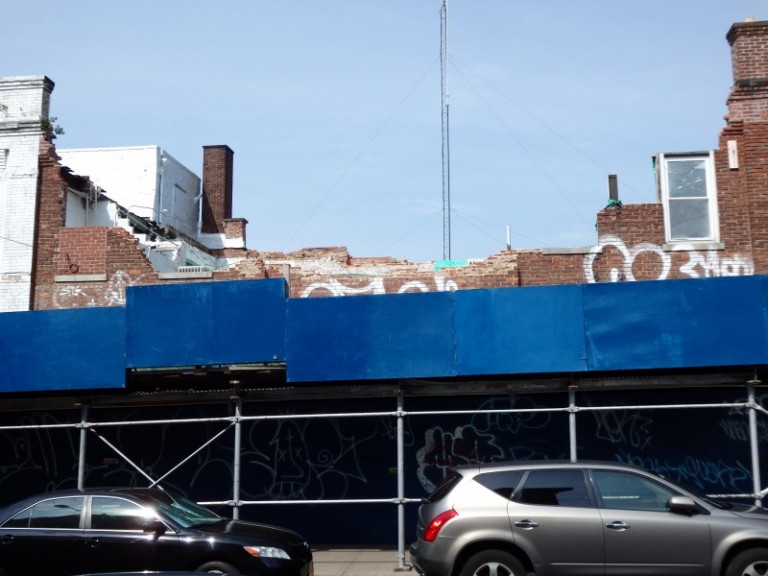 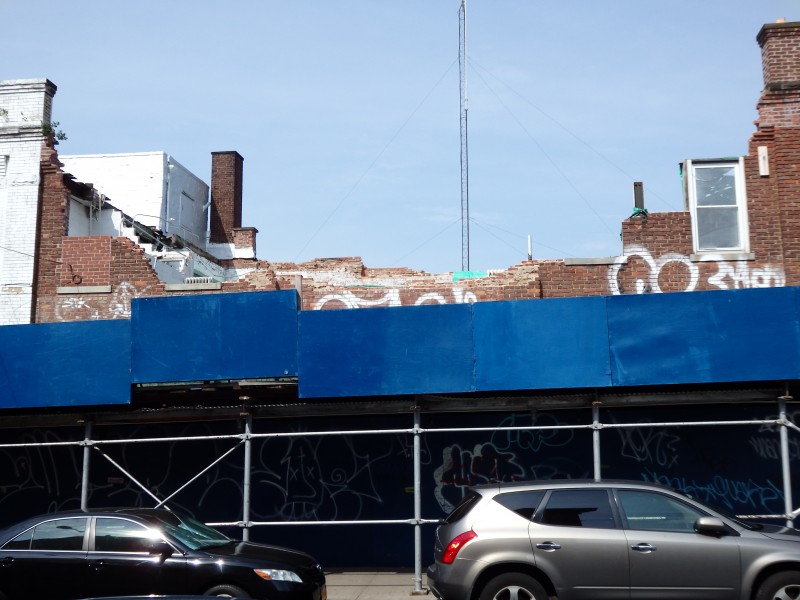 The partially collapsed building on Jamaica Avenue in Woodhaven still sits vacant, but work is expected by the end of July.
Photos by Phil Corso

Residents in Woodhaven said they were skeptic, but hopeful, they would see at least some progress at the site where a building collapsed last year.

The city Department of Buildings last assured residents of Woodhaven they would see the partially collapsed building at 78-19 Jamaica Ave. the week of July 4, but that date has come and gone. Officials still said demolition was imminent sometime this month, but residents said they had grown tired of the broken promises.

Buildings Department community liaison Kenneth Lazar told residents in Woodhaven to expect construction on the building sometime after Independence Day. He spoke at the Woodhaven Residents Block Association meeting last month and said building owner George Kochabe had been ordered by a city judge to do something with the building after letting it sit vacant since its April 2013 collapse.

“There is a set time frame. Work has to be done,” he said at the meeting. “We are not going to play games anymore. He can’t keep this going.”

As of press time, the ruined structure still sat idly with scaffolding surrounding the property and no work to be seen. But the DOB did confirm a set time frame had been established when it comes to building demolition at the site.

Work was expected to start at the site by July 14 with an estimated finish date of Oct. 14, the city said. Now, state Assemblyman Mike Miller (D-Woodhaven) said the owner was waiting for the Metropolitan Transportation Authority to clear demolition plans because of the building’s proximity to subway tracks along Jamaica Avenue. Only then, he said, would plans be permitted to move any further.

A strict timetable was put into motion after months of minimal movement on the site on the owner’s part, the WRBA said. Kochabe has been hit with thousands of dollars in fines since the collapse and Lazar said he has kept the building’s fate in limbo for too long.

The consequence, the group said, fell on the shoulders of the building’s neighbors. Since the collapse, the Woodhaven-Richmond Hill Volunteer Ambulance Corps next door has sat vacant because of issues resolving funding for repairs, the WRBA President Martin Colberg said. The Catholic Charities Woodhaven-Richmond Hill Senior Center, also located next door to the collapsed site, was forced to relocate to the nearby American Legion Post 118 building.

“We hope that this schedule is adhered to by the courts and by the city and this isn’t just another chapter in the long game that’s been going on,” the group said in a statement. “We’ve been promised that time has run out and that this schedule is a strict one – we hope for the sake of the Volunteer Ambulance Corps and our Seniors that this is, indeed, the case.”

Lazar said the Buildings Department had issued violations in regards to the damages at neighboring buildings, but those would only be resolved in civil court.

The building partially came down on April 12, 2013 when the second-story façade caved in and spilled rubble all over 79th street, destroying a parked car nearby. There were no injuries reported.

“It is shameful that this problem has stretched on for as long as it has.  It’s time for the city to resolve this once and for all,” Colberg said in a statement. “Not only does the current situation put us all at risk – every pedestrian who passes by, every car that drives by – but it might also kill the Ambulance Corps, which would be a terribly unfair outcome.”