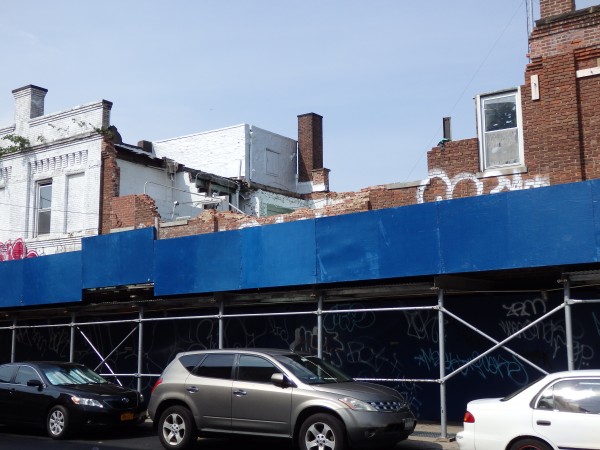 Woodhaven residents were slapped with another delay as they waited for a partially collapsed building on Jamaica Avenue to come down.

After being told that work would begin at the 78-19 Jamaica Ave. building by July 14, demolition plans were once again put on hold because of a lapse in communication between architects and the Metropolitan Transportation Authority as the agency reviews the plan. Now, a judge will have to set an entirely new timeline of events, officials said.

Martin Colberg, president of the Woodhaven Residents Block Association, has been patiently waiting for months along with the rest of Woodhaven with hopes of seeing progress at some point. He said the Buildings Department and MTA would finalize plans on Thursday, when a new deadline would likely be set.

“I hope the MTA understands how important this is to the community and does approve this by then,” Colberg said. “This shows how the city’s process for an issue like this is so outdated and needs to be changed.”

One week ago, residents rejoiced over a deadest deadline that was given to building owner George Kochabe, which said work must begin by July 14 with an estimated finish date of Oct. 14. Kochabe, who could not be reached for comment, had already become a sore subject for Woodhaven residents after months of delays since initially being ordered to do something on the property back in February.

This time, the delays were out of his hands, however. State Assemblyman Mike Miller (D-Woodhaven) said nothing could be done on the site at this point until the MTA completes its end of the deal and approves demolition plans because of the proximity to subway lines.

Last month, Buildings Department community liaison Kenneth Lazar told residents in Woodhaven to expect construction on the building sometime after Independence Day – which eventually became the July 14 date. He spoke at the Woodhaven Residents Block Association meeting in June and said Kochabe had been ordered by a city judge to do something with the building, which has sat vacant since its April 2013 collapse.

Kochabe has also been hit with thousands of dollars in fines since the collapse and Lazar said he has kept the building’s fate in limbo for too long, spurring the judge to provide more concrete deadlines. But those deadlines have since been revised.

The building partially collapsed back on April 12, 2013 when the second-story façade caved in and spilled rubble all over 79th street, destroying a parked car nearby. No one was injured, but properties around the building, including some neighboring buildings, were severely damaged.

“It is shameful that this problem has stretched on for as long as it has.  It’s time for the city to resolve this once and for all,” Colberg said in a statement. “Not only does the current situation put us all at risk – every pedestrian who passes by, every car that drives by – but it might also kill the Ambulance Corps, which would be a terribly unfair outcome.”

The collapsed building on Jamaica Avenue is awaiting word from MTA before any demolition plans can move forward. Photo by Phil Corso