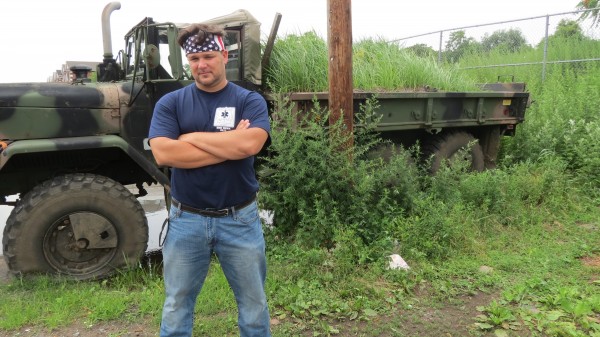 Howard Beach resident Paul Marcel stands with the army truck he used to rescue 120 people during Hurricane Sandy. Recently, some neighbors have complained about the truck being abandoned in a parking space on 78th Street. Photo by Ashley Helms

The camouflage military truck parked idly on 78th Street in Howard Beach belongs to resident Paul Marcel, a volunteer EMS worker, who used the large vehicle to rescue 120 neighbors from their homes that were rapidly filling with water during Hurricane Sandy.

The Forum Newsgroup ran a story in the July 10 issue detailing residents’ concerns with an abandoned army truck parked on 78th Street for several months without being moved. The owner reached out soon after to tell his story.

After buying the vehicle just days before the storm from a friend who had it shipped over from Afghanistan, Marcel said he started listening to his police scanner and preparing for the worst as the storm began barreling up the east coast.

When Sandy struck, the first emergency situation he responded to included an ambulance that became stuck in the water and needed to be pulled out. When he heard the call for help on the police scanner, Marcel said he rushed to the vehicle and had the medical personnel get into the truck.

On 92nd Street, a man swam up to the vehicle and asked Marcel if he could save his family because they were standing on furniture inside their home as water was rushing in. Marcel got the family, including their pet bird, onto the truck safely and brought them to a shelter on Cross Bay Boulevard.

“We went back [into the storm] nine times, and every time we went in, we got about 10 people out,” Marcel said.  “Usually when we were rescuing people, their neighbors wanted to be pulled out too.”

Despite an appearance on Anderson Cooper Live shortly after the storm, Marcel said he received little recognition in the community for his efforts.

The truck was hit repeatedly by large waves during his Hurricane Sandy rescue missions, causing damage to the radiator and the central tire inflation system, which keeps air in the truck’s tires. He said the truck is properly registered and hopes it will not be towed while he works on getting it up and running again.

“I have used it since Sandy, but it has been acting up like crazy,” Marcel said. “That is why it has been sitting there on the block like that. I was trying to fix it every week.”

But Marcel’s efforts have not been forgotten by some of the residents he brought to safety during the hurricane. Biago Fortunato, 32, lives on 99th Street and jumped into the truck with his family when he saw Marcel driving down the street.

Fortunato, his girlfriend and their dog were present for a couple of Marcel’s rescues before being taken to a shelter on 155th Street.

“It looked like a warzone. People were screaming, babies crying, helicopters overhead, it was like something out of a movie,” Fortunato said.

Angela Lanzieri, 25, said by the time Marcel got to her home, the entire first floor was already flooded. He trudged through five feet of water with down power lines nearby to bring her and her family to safety, Lanzieri said.

“He was tremendously helpful, it was a very scary situation,” Lanzieri said. “It seemed like he was doing everything he can to help anyone. He was fearless.”