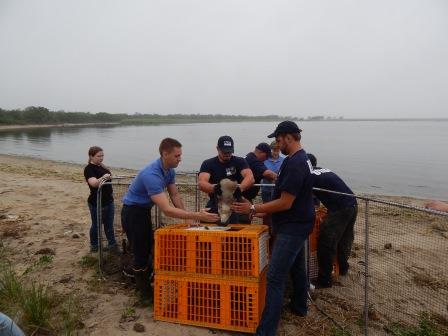 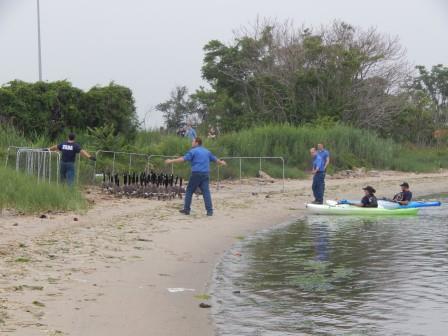 A government watchdog has his eyes set on Jamaica Bay geese.

David Karopkin, founder of GooseWatch NYC, has been hitting the wildlife refuge and other city spots for years to make sure that geese are not mishandled as authorities work to control populations and prevent run-ins with airplanes. And after learning of the 73 geese rounded up there late last month, the advocate has since been on a seemingly endless quest for details.

GooseWatch NYC has been prodding city, federal and state authorities for weeks in an attempt to collect numbers on exactly how many geese were rounded up and killed at Jamaica Bay this year, but to no avail, Karopkin said. 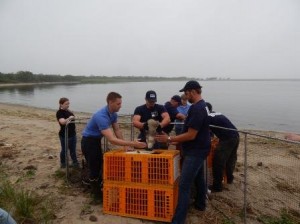 Advocates are calling for an end to the capturing and killing of geese, calling the acts inhumane and unjust.
Photo courtesy USDA

“I believe in government transparency and I believe we have a right to know,” Karopkin said. “I think it’s pretty appalling that the public only finds out about these slaughters after the fact. Even people who frequent the wildlife refuge were unaware that this was planned. It was news to them after the fact.”

So far, Karopkin was only able to confirm with the National Park Service that 73 geese were in fact rounded up and taken out of Jamaica Bay on June 25, but he could not get anymore details as to where they ended up and whether or not they were killed.

“The most important thing is to be able to have this information. Because otherwise, it becomes a memory,” he said. “I don’t see why that information should not be provided to the public.”

Carol Bannerman, a spokeswoman for the Animal and Plant Health Inspection Service of the U.S. Department of Agriculture, said crews captured Canada geese at two city park properties in June with the possibility of another in the near future. In a statement, Bannerman also confirmed the roundups and removals were at the order of the city to help combat airplane strikes at the city’s two major airports, including 1,448 geese in 2010 and 1,235 in 2009.

But no further specifics were given in regards to where the geese were taken and what happened to them.

That was where Karopkin said government agencies were overstepping their boundaries of authority.

“We’re dealing with government agencies that seem to resent transparency,” he said. “We are trying to document and expose these killings and get these images because without them, it’s just the USDA’s word.”

The Federal Aviation Administration reported 28 wildlife strikes at John F. Kennedy International Airport so far this year and an additional nine out of LaGuardia.

Karopkin said more than 260 geese were rounded up last year and the entire act was caught on GooseWatch NYC video. He said the Department of Agriculture typically rounded them up and killed them before donating the meat to food pantries. But little insight has been offered up as to how those processes were followed in a safe and responsible way, Karopkin said.

So for the past four years, he and his group of volunteers have been consistently eyeballing the geese activity at places like Jamaica Bay to advocate against widespread killings, which he said were not even necessary in the first place.

“This is slaughter. It’s not humane. It’s not even necessary,” he said. “What we do to try and document this stuff is a vehicle for the conversation about the merits of this issue. We have to communicate with our elected officials and other groups to spread our message that killing is not the answer.”