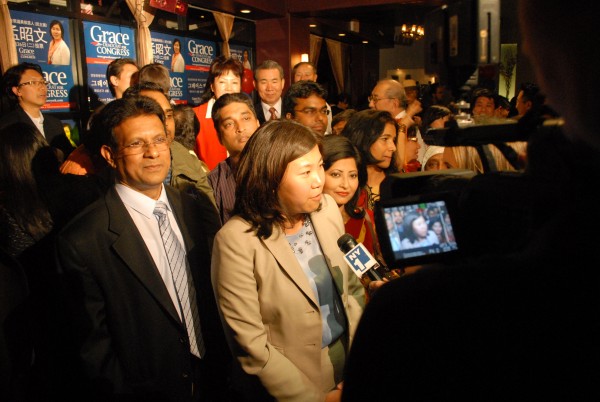 U.S. Rep Grace Meng on the night of her election in 2012. File Photo

As many political experts have pointed out, the questions surrounding the long-standing dominance and subsequent effects of party politics have never been easy to answer – perhaps because they are as varied and complex as Queens itself.

Some in the borough contended that dominant parties make it more difficult for political neophytes to enter the fray while others said that the traditional political machines have made strides to better represent Queens’ diverse and ever-growing population.

“Newcomers to politics often find it challenging to mount competitive campaigns for state elections due to the difficulty of raising funds without institutional support,” said Rachael Fauss, director of public policy for Citizens Union (CU). “The backing of the party continues to play a large role in elections, often making or breaking campaigns for office. And absent reforms to the state’s campaign finance system, voters will continue to have few choices at the polls.”

In 2011, a 22-year-old Queens student’s quest to run as an independent for retiring Assemblywoman Nettie Mayersohn’s seat was dashed when the city’s board of elections ruled that a technicality invalidated more than 1,500 signatures the student had collected. The party nomination was ultimately given to Michael Simanowitz, a former aide to Mayersohn.

In fact, statistics from CU underscored that when comparing state elections with city elections, voters have fewer choices, due to the strength of the city’s public matching system.

“Party bosses and powerbrokers rule and the citizens of Queens are always left out of the equation,” Whelan said in an emailed statement.

Whelan, in agreement with Fauss, also noted that many primary challenges in the borough end up stalled, mainly due to new candidates’ inability to fundraise with party-backed incumbents as well as “pressure” from the political organizations themselves.

She also pointed out that State Sen. Tony Avella (D-Bayside) had “defected” to the Independent Democrats, who help to jointly run the State Senate with the GOP.

A spokesperson for Crowley as well as Avella did not respond by press time to requests for comment.

Whelan also said that while these political dramas are unfolding, “ordinary voters are left out of the process.” She also lamented the dearth of Republican representation in the borough.

“Out of 53 elected officials in Queens only one Republican? The unbalance and misrepresentation of the people’s voices of Queens is a disgrace.”

But, some said that party politics isn’t necessarily a bad thing.

“I would say that any party organization has to balance two competing goals—to protect its incumbents and to incorporate new and growing groups,” said Professor Michael Krasner, who teaches political science at Queens College.

Krasner said that while the Queens Democratic Party has struggled to integrate new and growing groups in the borough, they are making some progress, such as with some Asian groups and the rise of one of the borough’s newest members of Congress U.S. Rep. Grace Meng (D-Flushing).

He also pointed out that, to its credit, the party has added a new set of district leaders in an attempt to provide representation and satisfaction to new groups, but the “question of whether or not these groups have been sufficiently represented will always be a subjective one.”

Queens’ attorney and former Mark Weprin staffer Ali Najmi had been rumored in the media to be mulling a primary challenge to state Assemblyman David Weprin (D-Fresh Meadows), but Najmi never did announce any type of political campaign.

However, Najmi, noting that candidates need a “wide base of support,” has said that many people have encouraged him to run for office. But he said he is “committed” to helping get other Democrats elected this year.

Still other Queens political insiders said that the Queens County Democratic Party is reluctant to embrace candidates with questionable reputations, such as was the case with former Democratic District Leader Albert Baldeo, who was arrested in 2012 on federal fraud charges accusing him of using fake donors to fatten his campaign coffers.

Moreover, political operatives also said they believed both parties have problems promoting candidates who reflect the racial diversity of the borough. Some even said that may be the reason why Meng was given support over Elizabeth Crowley or Rory Lancman for a Congressional seat.

Another political insider pointed out that elected offices, routinely covered in the media, are actually not the problem but rather the way judicial positions are selected.

The insider cited a NY Times letter from 1982 calling out Democrats for how un-democratic the process by which Queens Democrats pick judges. They also added that this system is still how the county elects its judicial candidates who always win.

“The reason this is a bigger problem is because nobody knows anything about these offices or the nomination process…,” the insider said.