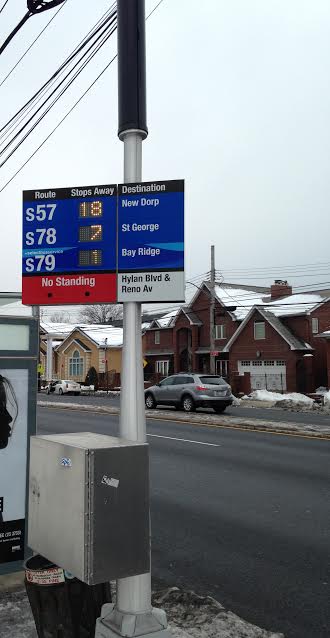 Commuting by bus in southern Queens will soon get a little bit easier.

Numerous bus countdown clocks are expected to be installed in the Community Board 9 district over the next year. Each clock costs about $20,000 and use a GPS tracking system installed on the buses to estimate their arrival time, officials said.

So far, only two countdown clocks have been installed in Staten Island, but the city Department of Transportation said it plans to install them across the five boroughs going forward.

Rebecca Bailin, a senior organizer at the grassroots Riders Alliance for better public transportation, said she thinks the countdown clocks make buses easier to use while modernizing them at the same time. The Riders Alliance has been pushing for the initiative after receiving feedback from bus riders on what would make their commute more enjoyable.

“It is helpful for a rider to know when they are standing and waiting for the bus when it is going to come and real-time data will make it easier,” Bailin said. “In Queens, there are not a lot of subway options, so folks out there are really reliant on buses to wherever they want to go”

In March, the MTA equipped all city buses with GPS technology, and Bailin said the bus clocks would be similar to the countdown clocks already installed in some subway stations. Currently, there is an Internet platform that riders can use to track the arrival of buses, but having a digital sign installed at bus stops makes planning a commute easier for riders who may not want to use their phone.

The senior organizer added that residents who are elderly, disabled or have young children may have a difficult time going up and down the stairs at subway stations and rely on the bus.

“This was something we worked on because we knew it was valuable,” Bailin said.

City Councilman Eric Ulrich (R-Ozone Park), allocated $180,000 in total for the clocks to be installed in his district, which includes Ozone Park, Woodhaven and part of Richmond Hill. Gregory Mitchell, Ulrich’s legislative aide, said the funds were voted on and approved by residents of Community Board 9 in this year’s participatory budgeting process.

In total, City Council members allocated roughly $2.8 million to fund the installation of more than 100 bus clocks across the city. The city expected their installation by 2015, after checking in with local council members about where the clocks would be most effective in each district.

In Staten Island, the clocks use solar technology to power them and the pilot program that has already been installed is expected to extend to other locations on the island, the Transportation Department said.