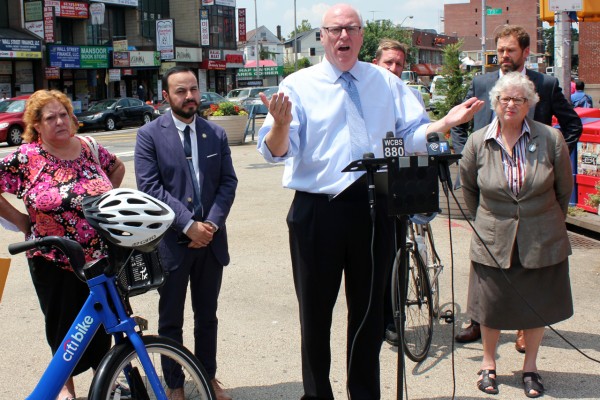 Officials are calling on bike share programs to be included in the tax code in order to spur the country to get more people biking to work. Photo courtesy Rep. Crowley

Lawmakers and transportation advocates rallied around legislation that would help accelerate the Citi Bike share program into Queens, where demand has already proven its presence. U.S. Rep. Joe Crowley (D-Jackson Heights) spearheaded the Bike to Work Act of 2014, which would give pre-tax commuter benefits to workers.

“Thousands of New Yorkers have already embraced the city’s bike share program as a viable, environmentally friendly and cost-effective form of public transportation,” Crowley said. “That is why I’m introducing legislation that further encourages participation in the program by making it more affordable for commuters.”

It was already widely accepted that Queens’ demand for the bike share program was apparent, according to the city’s bike share suggestion archive website. There, all of the city’s individual Citi Bike station location suggestions were compiled onto a map of the five boroughs and showed requests throughout the borough, including parts of Howard Beach, Ozone Park, Richmond Hill and Woodhaven.

Howard Beach residents have floated suggestions on places like the Belt Parkway, Cross Bay Boulevard, and near Charles Memorial Park. Other major roadways in southern Queens were also marked with blue suggestion dots on the map.

The Citi Bike share program has only been offered up in Manhattan and Brooklyn, but the congressman argued that bringing the program to Queens would only help by providing better access to other forms of transit in the already crowded borough. He stood alongside other elected officials and city Transportation Department representatives with hopes of spurring the city to give Queens and riders throughout the country some new wheels.

“Biking to work is good for the environment, good for relieving chronic traffic congestion, good for public health and good for the wallets of New Yorkers,” state Sen. Toby Stavisky (D-Flushing) said. “As we make bike share more affordable by allowing commuters to pay for them with pre-tax benefits, I hope that the influx of revenue will speed up access to Citi Bike in eastern Queens.”

Stavisky added that parts of Flushing and Jackson Heights were some of the most congested parts of her northeast Queens district.

DOT Commissioner Polly Trottenberg said the congressman was teaming up with U.S. Sen. Charles Schumer (D-NY) to make it a no-brainer for incentivizing bike share programs throughout the country.

“Bike share provides people in New York and nationwide with a healthy, affordable and sustainable option for getting around,” she said. “This is a win-win for thousands of Americans who already use bike share and those looking to make it part of their commuting routine.”

Crowley said the legislation sought out to amend Internal Revenue Code policy by including bike-sharing systems under the classification of public transportation, allowing workers to collect commuter benefits for the program.

Paul Steely White, executive director of Transportation Alternatives, has been at the forefront of a borough-wide effort to make Queens streets safer with help from his grassroots organization. He said the city should capitalize on the growing trend of bike share programs just as officials work to achieve Mayor Bill de Blasio’s Vision Zero Initiative to curb traffic-related fatalities to zero within 10 years.

“We can’t imagine the city without it, so it’s time for the IRS to recognize bike share as the popular commuting option that it is and work with Rep. Crowley and Congress to pass this bill,” he said. “There’s no better recognition of becoming mainstream than being written into the tax code.”