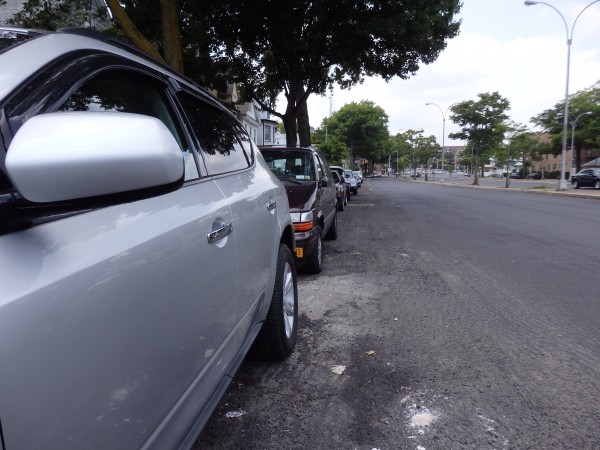 Residents in Woodhaven are trying to put the brakes on idle cars parked along Woodhaven Boulevard for weeks – or even months – at a time. Photo by Phil Corso

An ongoing debate over Select Bus Service routes in Woodhaven has put into motion another hot-button issue: street side parking.

Residents in Woodhaven have spent the better part of the past month voicing their concerns and reactions to a city Transportation Department proposal to bring new bus routes to Woodhaven Boulevard and other parts of southern Queens, sparking some heated discussions over congestion and traffic.

But one potential consequence of the plan has received more attention this week as residents wondered how more bus service along the busy boulevard might impact parking spaces there, where complaints ranged anywhere from illegally-parked cars to idle cars left unattended for weeks or months at a time.

The Woodhaven Residents Block Association has grappled with the immobile cars taking up spaces along the boulevard for extended periods of time and members of the group argued over the weekend that very little was being done to address the matter.

Even the group’s website went as far as including out-of-state vehicles as one of its top-priority issues, arguing that cars were too often being left idly along Woodhaven Boulevard and its surrounding streets.

“Parking has historically been hard to find in Woodhaven,” WRBA Director Vance Barbour said in a statement on the group’s site. “If these vehicles’ owners are dodging local state regulations, and skipping out on paying fees to New York State like the rest of the community pays, we owe it to our residents to call it to the attention of the proper authorities.”

One resident at a town hall meeting Saturday reiterated that because of the lack of alternate side of the street parking along Woodhaven Boulevard, law enforcement officials were left with very little to combat the illegally parked or idly parked vehicles.

A spokesman for the 102nd Precinct in the area said cars were being ticketed routinely along the boulevard for sitting idly for extended periods of time, but admitted it was a difficult issue to track at times.

The DOT, however, argued that Select Bus Service routes along Woodhaven Boulevard would in fact not affect the number of parking spaces under the current proposal. A Transportation Department spokesman said offset bus lanes would not take curbside parking spots away and any curbside bus lanes would have those displaced parking spots relocated onto nearby side roads.

A Select Bus Service fact sheet distributed by the Tri-state Transportation Campaign also addressed the on-street parking concern as a myth, arguing that the city could always put metered parking spaces on nearby side streets and ultimately leave the number of spots unaffected.

Nonetheless, a spokesman for City Councilman Eric Ulrich (R-Ozone Park) said that residents should report any idly parked cars to 311 or the local police precinct so law enforcement officials could chalk the vehicle’s tires, making it easier to determine whether or not it is moved in the future. He said cars were not legally allowed to sit idly for months at a time, even if they did have the proper license and registration paperwork at the ready.

The WRBA also asked that residents reported the vehicles straight to the block association.