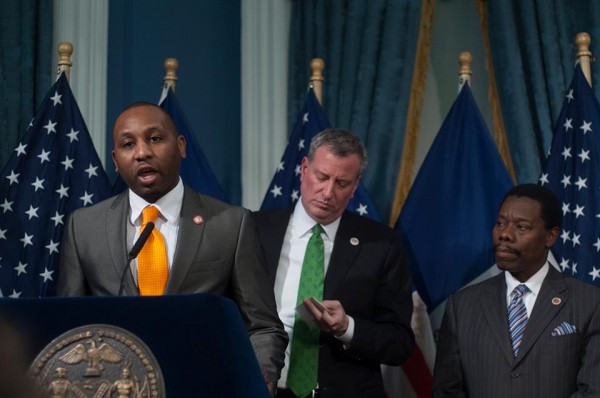 With shooting incidents on the uptick in the 101st and 114th precincts, elected officials last week announced a citywide initiative to reduce gun violence would be expanded to include parts of Far Rockaway and Astoria.

In its initial iteration, which began in the summer of 2012, the Gun Violence Crisis Management System focused efforts on five of the city’s most troubled communities, including South Jamaica. The $12.7 million expansion, according to the de Blasio administration, brings the program to 14 total precincts, recently adding high-risk communities in Far Rockaway and Astoria.

It expanded on a previous system centered on the “cure violence” model, and now includes “wrap around” services – programs that respond to meet the needs of every spectrum in the community that is impacted by gun violence, the mayor said.

“With this initiative, we are creating a focused effort incorporating mental health services, legal services, after-school programs—using models of proven success and targeting the communities where nearly half of the city’s shootings occur—into our effort to reduce gun violence and create a safer New York,” Mayor Bill de Blasio said.

The initiative—funded jointly by the de Blasio administration and the City Council—expands the cure violence system and will bring together six city agencies to support the creation of an organization to oversee the city’s efforts, chaired by the Mayor’s Office of Criminal Justice. Its efforts will include city agencies and providers to ensure coordination of programming and services and the continued support of research to ensure program effectiveness and accountability, officials said.

It was also established to provide for the expansion and addition of job training, mental health and legal services, establishment of school-based conflict mediation and anti-violence programs, including the Match program, which provides daily tutoring in algebra to high school students, and which random-control trials have demonstrated a 44-percent reduction in violence, while improving academic performance by three grades.

“The anti-gun violence initiative will be instrumental in reducing crime not only in my district, but also in nine other resource starved communities in New York City. This $6 million [Council] allocation will provide the means to combat crime, improve quality of life, and revitalize their neighborhoods,” Councilman Donovan Richards (D-Far Rockaway) said in a statement.

De Blasio said his office’s efforts, with the help of the council, would also provide for the establishment of an anti-violence program training academy to educate neighborhood-based anti-gun violence providers “to ensure consistency and fidelity to the effective models of community based anti-violence work.”  The initiative would allow facilitators to develop community messaging and educational materials to reinforce norms against gun violence, similar to successful campaigns promoting seatbelt use and against smoking.