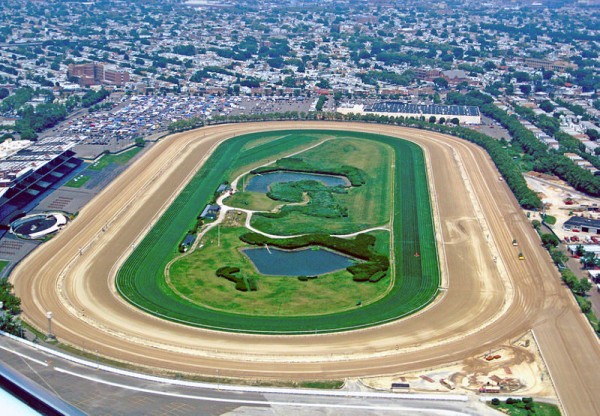 NYCFC will kick off its inaugural season next year and play their home matches at Yankee Stadium in the Bronx for the first three seasons. As plans for a soccer-specific facility in the Bronx near Yankee Stadium gradually fell through, the rumor mill concerning Queens began churning. According to a Wall Street Journal report, the team is looking at a parking lot south of the track as a possible location of the stadium. Repeated calls and emails to NYCFC reps were not returned.

“Currently, I am extremely hesitant to welcome a soccer stadium to the Aqueduct site,” state Sen. Joe Addabbo, Jr. (D-Howard Beach) said in a statement. “Exact location and size of the stadium, traffic patterns, public safety and the certain impact on the surrounding neighborhood quality of life are just some of the issues that I would need answers to in examining this proposal. My constituents need as many facts as possible now, as we start to have discussions on this issue.”

City Councilman Eric Ulrich (R-Ozone Park) echoed Addabbo’s emphasis on due diligence, but also noted that the team and its facility would offer a tremendous opportunity for the borough.

“A soccer stadium would create jobs, stimulate economic development and make Queens the city’s premier sports destination,” Ulrich said. “In the days and weeks ahead, I will be working closely with the community and my fellow elected officials to see if the proposed site in my district is the right fit before making a final decision.”

As far as the de Blasio administration is concerned, mayoral spokesman Phil Walzak said this week that they are “committed to working with the City Council and the NYCFC club to identify an appropriate site in New York City to host a world class soccer stadium and facility.”

But NYCFC isn’t the only team looking to tap into Queens’ sports and entertainment market. The North American Soccer League’s New York Cosmos submitted a bid in January, 2013, in response to a request for proposal from the state Economic Development Corporation to develop a privately funded 25,000-seat soccer stadium at Belmont Park, which straddles the border of Queens and Nassau. The bid emerged, in part, in the wake of a plan to build on Flushing-Meadows Corona Park that was scrapped before it even started. Cosmos Chief Operating Officer Erik Stover said that the organization is waiting on the EDC’s decision on preferred bidder status.

“We feel confident that we’ve put the best proposal forward,” he said. “But time will tell who wins.”

Stover went on to say that while the speculation surrounding Aqueduct has “no impact on us whatsoever,” any project is going to be an incredibly thorough undertaking.

“Before even a shovel hits the ground, a lot of work has to be done—environmental impact studies, traffic studies, safety, everything you could think of,” he said.

Proposals and funding are big first steps, but the question persists: Can a brand-new soccer-specific stadium survive the long haul?

“A stadium and development would be economically viable in New York,” said Nick Laveglia of the Borough Boys Supporters Club. “Red Bull Arena draws around eightteen thousand people per game and that is without development in the direct vicinity of the stadium. If you have a destination, like they want to do in Elmont, with the increasing interest in soccer in this country, it would be economically viable for both the team and the community.”